A Pakistani Christian accused of blasphemy for “liking” and “sharing” a Facebook post which “defamed and disrespected” the Kaaba in Mecca – the building at the centre of Islam’s most sacred mosque – has been granted bail after four years in prison. In 2018 he was sentenced to 10 years as the youngest Christian convicted under Pakistan’s blasphemy laws, which are frequently abused as a way to settle scores.

He will be released on bail until the paperwork to acquit him of blasphemy can be done, implying he should never have been convicted in the first place. His lawyer Naseeb Anjum successfully argued that there was no evidence that the ‘like’ had been posted or created by the then-teenager.

Nabeel Masih was 16 at the time of his arrest in September 2016, but is now 20. His original lawyers had argued that he should not have been imprisoned as soon as he was arrested as he had no prior convictions and was a juvenile.

However, a magistrate’s court in Kasur, 50km south of Lahore, rejected his bail application on 7 February 2017.

In addition, his lawyers had reported being intimidated by the complainant’s supporters as they made their Appeal Court appearance in  October 2016.  Aneeqa Maria Anthony said she was told by a lawyer for the complainant to “watch herself and stay away”. She also said about 80 people at the hearing had threatened Masih’s family.

Nabeel Masih, 16,
is alleged to have ‘defamed’ the Kaaba in Mecca, the building at the centre of Islam’s most sacred mosque. Amalia Sari / Flickr / C

Lawyers representing a 16-year-old Pakistani Christian boy accused of blasphemy for ‘liking’ a photo posted on Facebook have reported being intimidated by the complainant’s supporters as they made their Appeal Court appearance on 3 October.

Aneeqa Maria Anthony, head of the legal team representing the boy, Nabeel Masih, said she was told by a lawyer for the complainant to “watch herself and stay away”. She also said about 80 people at the hearing made the courtroom tense, after they protested and threatened Masih’s family.

The appeal was heard in Pattoki, a town 50 miles from Lahore in north-eastern Pakistan. Anthony will apply to get the case heard in Lahore, where her legal team and the boy’s family will feel safer.

Pakistan is an Islamic state. We are all Muslims. These are Muslim courts, so you should not defend such a criminal. You people come here from Lahore to pursue this case, but there are many people here whom you cannot see, so you better watch yourself and stay away.

She said she is “confident [Masih] has committed no crime and that is why we are representing him… Nabeel is innocent: the accusation against him has not yet been proven”.

Masih was arrested on 18 Sep. after a complaint had been filed with the police earlier in the day. The complainant, Akhtar Ali, said Masih had ‘liked’ and shared on Facebook a defamatory photograph of the Kaaba – the building at the centre of Islam’s holiest site in Mecca.

After the incident many Christians living in the area went into hiding fearing reprisals, though they later returned. 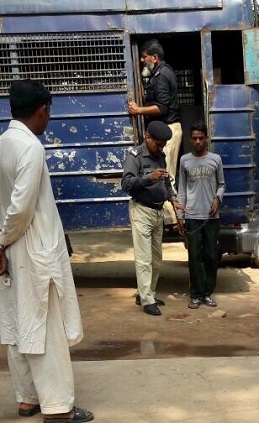 Nabeel Masih,
16, has been accused of ‘liking’ and sharing a post on Facebook which ‘defamed and disrespected’ the Kaaba in Mecca.The Voice Society

Masih was in court because his application for bail was being contested. According to three lawyers present in the courtroom, Amin Muzammal Chaudhry – the complainant’s lawyer – told Anthony that Masih’s “is a blasphemy case and that this man has blasphemed against Islam. You should know that Pakistan is an Islamic state. We are all Muslims. These are Muslim courts, so you should not defend such a criminal. You people come here from Lahore to pursue this case, but there are many people here whom you cannot see, so you better watch yourself and stay away.”

Human rights activist Napoleon Qayyum said Christians and other religious minorities must seek justice through the courts, but he criticised Chaudhry’s behaviour: “We condemn this treatment of attorneys in the courtroom. Pakistan’s Christians are citizens of the country. We have lived here for a long time and should not be considered outsiders.”

Religious freedoms are guaranteed in Pakistan’s Constitution, which was a secular state at its independence in 1947, though became an Islamic republic in 1956. It is estimated that 95% of Pakistan’s population are Muslim, and about 1.6% (2.5 million) Christian.

In the 2016 World Watch List (published by Christian charity Open Doors) of countries where it is most difficult to live as a Christian, Pakistan is 6th, just behind Syria. “Pakistan’s blasphemy laws continue to be abused to settle personal scores, particularly against minorities including Christians,” reports Open Doors.

“District-level police are often under the control of powerful politicians, wealthy landowners, and other influential members of society. There are numerous reported cases of police extrajudicial killings of criminal suspects, torture of detainees to obtain confessions, and harassment and extortion of individuals who seek to file criminal cases.

In July, Pakistani Christian Nadeem Masih and his family fled their home in the religiously conservative city of Gujarat after he was accused of committing blasphemy by sending an offensive text message from his mobile phone.

In May, Imran Masih, a 30-year-old road sweeper, was attacked and had a fatwa declared against him after a work colleague said he’d found an anti-Islamic video on Masih’s phone.

In 2014, lawyer Rashid Rehman was threatened in court while he represented a man accused of ‘liking’ a ‘blasphemous’ message posted on Facebook. Rehman was late