“[Kazakhstan] systematically violates intertwined fundamental rights – such as the freedoms of religion or belief, of expression and of assembly” when it has international obligations to respect and defend these, the news service said in its religious freedom survey of the country, adding that “there is a culture of impunity for such violations [of human rights] among officials”. 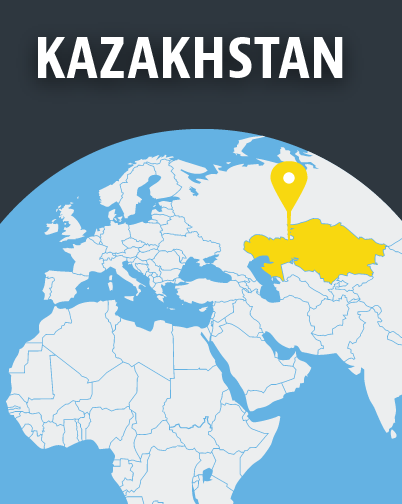 Violations included unfair trials and torture of prisoners, wide-ranging “laws” allowing for arbitrary actions by government officials, and making the exercise of religious freedom dependent on state permission – with restrictions on religious activities, and also for children under 18, according to the report.

In 2017 there was an increase in prosecutions and penalties for those exercising their freedom of religion and belief, the report noted.

In 2013 at least 153 sentences were given to 126 individuals, “mainly for meeting for worship or sharing their beliefs without state permission”, with fines then between one and two months’ average wages. In 2017 “at least 283 individuals, religious communities, charities and companies were prosecuted … [with] fines [that] ranged between the equivalent of three weeks to six months’ average wages,” the report said.

Other sentences included “a three-day imprisonment for refusing to pay an earlier fine, deportation and the destruction of religious literature, and temporary or permanent bans on activities like meeting for worship”. Five religious communities received three-month bans.

Of the 283 cases, 92 involved Protestants and 24 Muslims. The remaining 167 cases involved others, including 56 companies or traders, four Jehovah’s Witnesses, and a Russian Orthodox Church priest.

Forum 18 reported in July that in the first half of 2018, “courts in Kazakhstan prosecuted at least 69 individuals, religious communities or organisations for religious activities”.

Meanwhile the Senate is due to consider a set of wide-ranging amendments to Kazakhstan’s Religion Law, which are expected to further infringe upon religious freedom and have been criticised for violating international human rights laws.

“Visiting the country and talking to people, one gets the impression of a sort of overlapping of two cults: a public and dominant one, linked to loyalty to the State, to the law and to the iconography spiced by a certain cult for the personality of Nazarbayev; and a private one, strictly related to religion and ethnicity of belonging,” Giannicola Saldutti, an associate researcher at the Rome-based Institute of Advanced Studies in Geopolitics and Auxiliary Sciences, told Agenzia Fides.

According to Saldutti this “balance” has prevented extremist groups such as Islamic State from gaining a foothold in the majority-Muslim Central Asian country.