Fresh violence in the volatile region of North Kivu, in eastern DRC, claimed at least five lives over the weekend.

According to local sources, the victims were killed as armed men believed to be militants of Muslim Defense International attacked a convoy of trucks on Friday night (20 April) near the town of Kitchanga, about 10km from the city of Beni. Three trucks were set on fire and an undetermined number of people are now missing.

ADF-NALU was originally rooted in a rebel movement to overthrow Uganda’s government and replace it with an Islamic state, but was forced to re-locate over the border into DRC. The group has been trying to uproot Christians from north-eastern DRC through attacks, rape, looting, kidnap and murder.

The Kivu security tracker, developed by the Congo Research Group at the University of New York, recorded 215 killings, 334 abductions and 75 kidnappings in North and South Kivu between 1 January and 31 March this year. 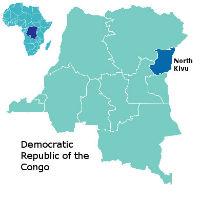 The city of Beni and its neighbouring communities have been among the most affected by the violence.

Local bishops and civil society have repeatedly denounced the violence still carried out in the name of ADF-NALU, but which has now taken the form of a jihadist organisation.

In reaction to the Friday attack, local traders and transporters went on strike yesterday (23 April). According to Kambale Bishamba, president of the Association of Drivers of Congo (ACCO) in Beni, they are protesting against the upsurge of violence and demanding more protection in the areas near the Ugandan border, where most attacks have taken place.

Meanwhile, a film highlighting the impact of sexual violence in eastern DRC has received the 2017 Human Rights Award from the World Association for Christian Communication and SIGNIS, a worldwide association of Catholic communicators.

Thousands of women, young and old, have been victims of sexual violence, suffering lasting psychological, physical and social consequences.

The film, ‘Maman Colonelle’, depicts the ways in which society blames them, and does not see them as the victims they are, therefore denying them justice and human rights.