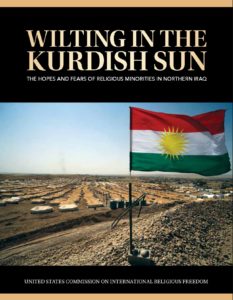 As bad as the past two years have been for the Christians and other religious minorities of northern Iraq, their torment by the so-called Islamic State could have been much worse if they had not been able to obtain refuge in next-door Kurdistan, Iraq’s semi-autonomous region in the north.

“Even so, troubling issues related to discrimination and even violence targeting ethnic and religious minorities exist within this haven, exacerbated by [Kurdistan’s] strained resources and security situation,” says a report issued 1 June by the U.S. Commission on International Religious Freedom. “While [Kurdistan] remains far more welcoming and tolerant to minorities than its regional neighbors, minorities complain of systemic biases leveled against them that prevent them from fully realizing their rights or fully participating in society.”

The report says Assyrian Christians who had been driven out of northeast Iraq during uprisings and suppressions of the 20th Century have returned, deeds to their abandoned land in hand, only to find local Kurds occupying it. Other Christians charge that powerful local officials and businesses have seized their land to build new enterprises. Protests and demands for compensation have been met by unresponsive courts and a clampdown on freedom of movement, according to the report.

The report, titled “Wilting in the Kurdish Sun: The Hopes and Fears of Religious Minorities in Northern Iraq,” is based on research and interviews with Kurdish regional government officials, conducted between May and September 2016.

The commission is an advisory body to the US Congress and the State Department on religious-liberty conditions around the world.