The lawyer for Aasiya Noreen said 7 Nov. that the Pakistani Christian, whose blasphemy conviction was overturned 31 Oct., was on a plane, destination undisclosed.

“No one knows where she will land,” the lawyer, Saiful Malook, told Agence France-Presse in a message via Twitter posted at 7:40 p.m. GMT: 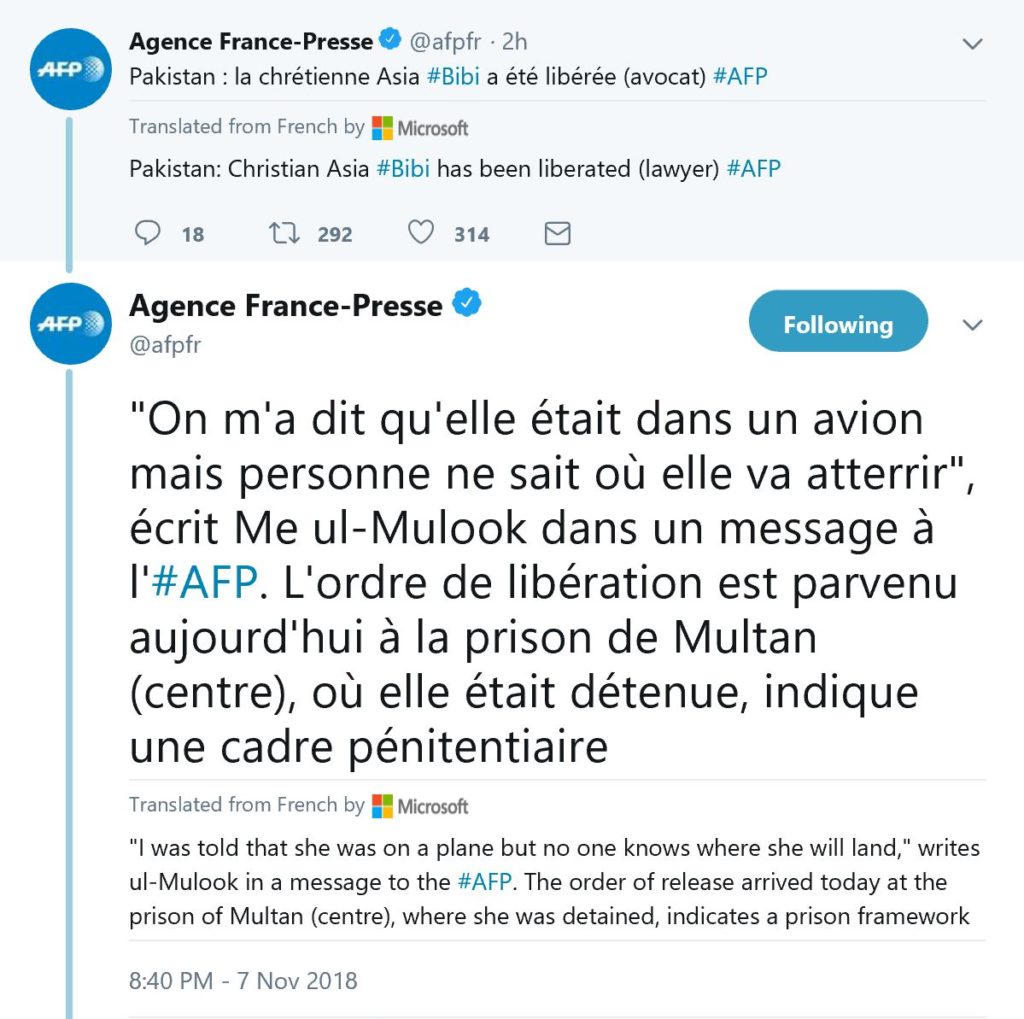 Noreen, widely known as Asia Bibi, was freed by the Pakistani Supreme Court when it threw out a lower court’s conviction on charges that she had insulted Islam. She had spent nine years in custody on the charge, and lost all the way through the courts, until the highest court in the country declared that the government’s case against her had been a shambles.

The ruling set off widespread demonstrations by hardline Islamists, among whom Pakistan’s anti-blasphemy laws are deeply popular, even as worldwide opinion is harshly set against them. Mobs demanded that Noreen be killed for the purported crime. Her lawyer left Pakistan out of concern for his safety, and currently is in The Netherlands.

The Italian government said 6 Nov. it was “coordinating with other countries to ensure safety for Asia Bibi and her family,” the Associated Press reported.

The AP said the Pakistani government late 7 Nov. flew Noreen from the detention facility in Multan in Punjab province, where she was being held while the orders for her release wound their way through the courts, to Islamabad. “Troops guarded the roads leading to the airport from which she departed,” the AP reported, citing two “senior government officials” it did not name. The AP did not say Noreen had left the country.

It was unclear late 7 Nov. whether any of Noreen’s family — she has several children — were on the plane with her.

The Story of Asia Bibi

Aasiya Noreen, commonly known as Asia Bibi, received the death penalty in 2010 after she allegedly made derogatory comments about Islam’s prophet, Muhammad, during an argument with a Muslim woman.

In June 2009, Noreen was picking berries in the fields as a day labourer in Sheikhupura, outside Lahore in eastern Pakistan. It was hot. She brought water to a female co-worker, who objected that the touch of a Christian had made the water haram, or religiously forbidden for Muslims. The woman apparently told Noreen to convert to Islam in order to become purified of her ritual impurity. Noreen’s rejoinder was perceived as an insult to Islam. She was arrested, accused of blasphemy against the prophet and the Quran, and has been in prison ever since.

The Muslim woman, with her sister, were the only two eyewitnesses in the case, but the defence failed to convince the appeals judges that their evidence lacked credibility.

In the Lahore High Court appeal hearing in October 2014, Bibi’s then-lawyer, Naeem Shakir, argued that the main complainant in the case, the local Muslim cleric Mohamed Salaam, had not heard Bibi blaspheme, and that his original complaint had been lodged only five days after the women’s quarrel. Shakir argued that during her 2010 trial the only reason given for this delay was “deliberation and consultation”, and said that Salaam had acknowledged this in court.

Salaam was filmed by an international film crew for a film about Bibi in 2014, saying that it is his religious obligation to defend the dignity of Muhammad and that is why he decided to be a witness before the court. He said he heard Bibi confess to blasphemy when she was brought before a village council several days after the quarrel.

Her other main accuser, Mohamed Imran, owner of the field in which Noreen worked, was not present at the time of the quarrel either; he was away from the village.

However, the High Court ruled that it had no choice but to let the conviction and death penalty stand, based on the way the country’s laws are written, and on what it characterised as an inept trial defence.

At the same time, the court asked Pakistan’s lawmakers to craft legislation that would empower trial courts to apply a test that would make future blasphemy convictions much more difficult to achieve.

‘You have to be in hiding’

Noreen’s lawyer then filed an appeal with Pakistan’s Supreme Court and in July 2015 it agreed it would hear Noreen’s case.

Commentators praised the court for its courage to hear the appeal in the face of strong public sentiment against anyone seen to denigrate Islam, with some calling it a “historic day for Pakistan”.

However, the appeal stalled in late 2016 when one member of the three-judge panel recused himself.

After that announcement, Malook, who was also the prosecution lawyer in the case of the murder of Punjab Governor Salmaan Taseer (who was murdered for his opposition of the blasphemy law and support for Asia Bibi), was placed under 24-hour protection. Ahead of the hearing in Islamabad on 8 October he told the Associated Press, “I have lost my health. I am a high-blood-pressure patient, my privacy is totally lost. You have to be in hiding,” as everyone knew his identity. “They look at this house and they know this is the home of a person who can be killed at any time by angry mullahs."

Pakistan’s Supreme Court was the last possibility for Noreen to see her death sentence repealed, though had the court rejected her appeal she could have appealed to the president for mercy. The Supreme Court, on 31 October 2018, threw out her conviction by the lower court, ruling that the government's case against her was without foundation. The decision sparked widespread protests by Islamic hardliners, who demanded an inquest of the court's ruling.

While the Supreme Court considered a review of her case, requested by the Imam who filed a complaint against her in 2009, Noreen was held in a secret location in Islamabad. Her lawyer fled to the Netherlands on 7 November out of concern for his safety but returned for the hearing by the Supreme Court on 29 January 2019.

A panel of three judges, chaired by the new Chief Justice Asif Saeed Khan Khosa, ruled there was no ground for a review as the petitioner had not been able to highlight any  mistakes in the original verdict.

Noreen's case has divided Pakistan. Although the Supreme Court ruled she was free to go, she was kept in a secret location for another three months until she was able to join her two daughters who were already in Canada.

Bibi’s case attracted global attention, much of it critical of Pakistan’s blasphemy laws, which critics contend are routinely abused as a pretext to settle personal scores.

In 2011 two prominent Pakistani politicians, Taseer and Shahbaz Bhatti, were assassinated after they spoke publicly in Bibi’s defence.

Following the killing of Taseer, Bibi’s husband said she was “very afraid”. “She knows the Muslims have announced a price on her head and would go to any lengths to kill her,” he said. Authorities increased her security and moved her to an all-women facility, Multan Prison.

In May 2018 another politician who has championed the country’s minority communities, Ahsan Iqbal, survived an assassination attempt by a gunman protesting against changes to the blasphemy laws.

Pope Benedict XVI had made a public plea for clemency, while the EU’s Special Envoy for Freedom of Religion or Belief, Jan Figeľ, had told Pakistani officials that the renewal of their export privileges to Europe would depend on the release of Asia Bibi.