Mauritania announced on Friday (17 November) that showing repentance will no longer be a reason to repeal a death sentence handed out for blasphemy and apostasy.

The government of the West African nation said in a statement it would introduce a new bill to “harden up expected sentences for blasphemers”, as News24 reported.

“Every Muslim, man or woman, who mocks or insults Mohammed (peace be upon him), his angels, books … is liable to face the death penalty, without being asked to repent. They will incur the death penalty even if they repent,” Justice Minister Brahim Ould Daddah said.

Mauritania’s Constitution officially states that Islam is the religion of the people and the state, and nearly all are Sunni Muslims. There are a small number of non-Muslims and most are Christian expatriates. Muslims who convert to Christianity face pressure from their families, as they are seen as bringing shame on their tribal or ethnic group.

The Justice Minister’s announcement followed popular protests in the conservative Islamic Republic last week against the release of a blogger, who had previously been given the death penalty for alleged blasphemy.

Cheikh Ould Mohamed Ould Mkheitir was freed on 9 November after an appeal court reduced that sentence to two years’ imprisonment. It was for an article in which he criticised “religious justification for discrimination in Mauritanian society”, News24 reported. Since he had been in jail since January 2014, he was then released.

Mkheitir, in his thirties, wrote, amongst other things, about “the mistreatment of Mauritania’s black population, blasting ‘an iniquitous social order’ with an underclass that was ‘marginalised and discriminated against from birth’”, according to News24. 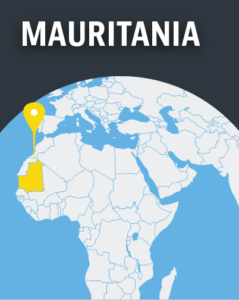 Mauritania has a large contingent of former slaves; slavery was only abolished in in 1981, but is still being practiced. As Mkheitir is a former slave, this adds to the political sensitivity of the case.

The BBC said the government appeared confused and was sending out “conflicting messages”. The president had earlier emphasised that Mauritania is not a secular country and that “all necessary measures” would be taken. But right after the latest verdict, which saw the release of Mkheitir, the government said the verdict and judiciary independence should be respected.

Although Mauritania’s Constitution guarantees freedom of expression and thought, in practice this is not guaranteed and prosecutors have appealed the court’s decision.

The country is number 47 on the 2017 Open Doors World Watch List of the 50 countries where it is most difficult to live as a Christian.