Students in Saudi Arabia’s schools receive religious education that “contains hateful and incendiary language” towards other Islamic traditions than Sunni Islam, and severe criticism of Jews, Christians and people of other faiths, a Human Rights Watch (HRW) report says.

The comprehensive review of schoolbooks for religious studies for the 2016-17 school year, produced by the Education Ministry, found they contained violent and intolerant teachings.

“As early as first grade, students in Saudi schools are being taught hatred towards all those perceived to be of a different faith or school of thought,” said Sarah Leah Whitson, Middle East director at HRW. “The lessons in hate are reinforced with each following year.” 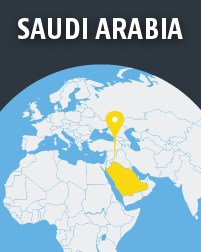 The report also found that the curriculum often describes Jews, Christians and people of other faiths, as kuffar, or ‘unbelievers’. In one fifth-grade second semester textbook, the curriculum “declares that it is the duty of Muslims to excommunicate them: ‘For whoever does not [excommunicate them], or whoever doubts their religious infidelity is himself an unbeliever'”.

In another chapter titled ‘Loyalty to Unbelievers’, Muslim students are told “to reserve loyalty to God, the Prophet and other believers, and to express hostility and antagonism towards ‘unbelievers’. It warns Muslims that by imitating “unbelievers” or even joining them in their celebrations, one is at risk of expressing loyalty to them, and worse even, becoming one of them”, says HRW.

The human-rights body points out that “Saudi Arabia has faced pressure to reform its school religion curriculum since the September 11 attacks, after it was revealed that 15 of the 19 hijackers were Saudi citizens. Saudi officials have said repeatedly they will carry out these reforms, although past reviews of the curriculum over the last dozen years have shown these promises to be hollow”.

In July World Watch Monitor reported how an American expert accused Saudi Arabia of breaking its promises to reform textbooks that pump out an “ideology of hatred”, thereby threatening Western security and Middle Eastern stability.

Nina Shea, director of the Center for Religious Freedom in Washington, recommended that the US halt its recently approved multi-billion dollar defence contracts with Riyadh “as long as the Saudi government publishes, posts, approves, finances or distributes textbooks that direct violence and hatred against any religion or group that may include American citizens”.