Uzbek police raided a home where eight Protestants had gathered for a meal, and to read the Bible together, and arrested all of them, Forum 18 reports. 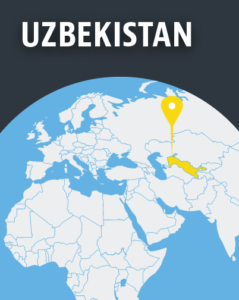 The incident took place in the town of Pap, in Uzbekistan’s eastern Namangan Region, on 19 November. Police conducted the raid without a search warrant and confiscated religious literature, including Bibles, and digital materials, all having been acquired legally, Forum 18 said. A laptop and a desktop computer were also taken away.

The Protestants were questioned at the police station until 3am, though no detention warrant was produced, Forum 18 said.

Police told the Protestants that all religious materials will be sent to the Religious Affairs Committee for “expert analysis” and that they may be charged for possession of the religious literature despite the fact it was bought legally.

Forum 18 reported that it contacted police authorities involved in the raid by phone, but that its questions were ignored.

Earlier, on 30 September, police in the Tashkent Region raided and detained 40 Protestants during a retreat.

The “psychological pressure” by police reportedly resulted in a woman and a five-year-old girl being taken to hospital. According to Forum 18, four women who participated in the raid stole property from female Protestants.

Thirty-one Protestants were then prosecuted under Administrative Code articles for illegal production, storage or import into Uzbekistan of religious materials; violation of the procedure for holding religious meetings; and teaching religious beliefs without specialised religious education and without permission from the central registered religious organisation.

The trial resulted in Protestants being made to pay fines equivalent to as much as 20 times the monthly minimum wage.