Landmarks in the UK, Ireland, Iraq and the Philippines are due to be floodlit in red today (22 November) to highlight the persecution of faith groups for their “peacefully held beliefs”. The “Red Wednesday” initiative is in its second year and has been pioneered by Aid to the Church in . . . Read More
November 3, 2017 Iraq Dohuk, Iraq, Islamic State, Kirkuk, Nineveh Plains, Peshmerga 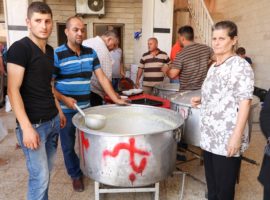 Christians who have returned to the Nineveh Plains in northern Iraq, three years after fleeing Islamic State militants, are on high alert now Iraqi forces have retaken some of the disputed region from Kurdish forces. Father Poulos, one of the priests in the town of Bashiqa, near Mosul, told World . . . Read More
October 17, 2017 Iraq Erbil, Iraq, Islamic State, Karamles, Kurds, Nineveh Plains, Peshmerga, Syria 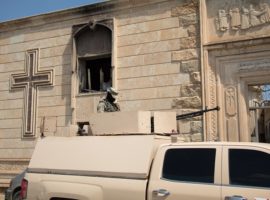 Referring to his country’s experience of oppression during the Soviet Union era, the Hungarian Prime Minister has once again explained why his government has been the first – and so far the only – government to specifically address the persecution of Christians around the world. Yesterday (12 October) he pledged . . . Read More
October 12, 2017 Iraq Chaldeans, Iraq, Islamic State, Karamles, Kurds, Mosul, Nineveh Plains It’s been a year since Karamles was liberated from Islamic State group (IS) militants. It was one of the Nineveh Plains towns east of Mosul that fell to IS as it advanced across northern Iraq in August 2014. The occupation forced Christian families to flee for safer cities like Erbil, . . . Read More
September 25, 2017 Iraq Elections, Iraq, Islamic State, Kirkuk, Kurds, Middle East, Nineveh Plains, Yazidis Iraq’s Kurds went to the polls today (25 September) to vote on whether to become a new state, independent of Iraq. According to Radio Free Europe Radio Liberty (RFERL) the vast majority will have voted “yes” to the question on the ballot paper: “Do you want the Kurdistan region and . . . Read More