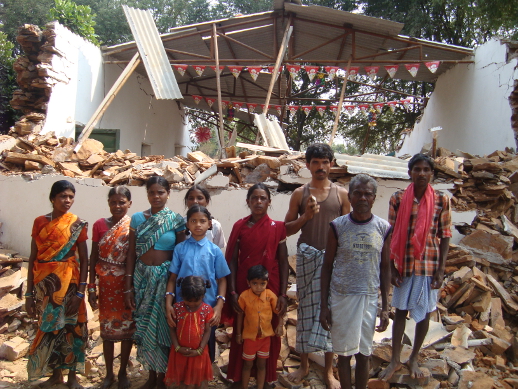 Members of Divya Jyoti Church were too late to stop a mob from knocking down their building.World Watch Monitor

On March 12 in a southeast India village, the local newspaper published allegations that Divya Jyoti Church had been built on government land.

The next day, a crowd equipped with a backhoe demolished the small church building, encountering no resistance from the leaders of Guriya Village, in Chhattisgarh state.

Divya Jyoti Pastor Budhram Baghel said the church building had stood on land belonging to him.

“A temporary shed had been constructed in 2006 on this land after permission from the authorities and the same was later replaced by a permanent building,” said Rev. Rakesh Dass, a friend of Bahel’s.

Three residents of Gadia village, Yogeshwar Kashyap and two people identified as Lakhmuram and Shyamlal, filed a complaint that the building encroached on government land. Their allegations were published in the local newspaper, Dass said.

The crowd arrived the next day, led by Kailash Rathi and Yogendra Kaushik, officers of the local Visva Hindu Parishad, or VHP, a Hindu nationalist organization.

Budhram tried to summon help, but it did not arrive quickly enough to prevent the demolition.
Those who protested were assaulted by members of the crowd, Christian witnesses said. They said several local officials, including the revenue officer, land officer, village head, police chief and a group of police officers, watched the demolition without objection.

“They didn’t even measure the land,” Dass said.

The church filed a complaint at the Lohandiguda Police Station on March 13 and held a silent protest rally on March 16. A memorandum regarding the demolition also has been submitted to the Collector & District Magistrate of Jagdalpur, a nearby major city.

In other incidents around India in March and April:

March 24 — Hindu extremists shouting anti-Christain slogans surrounded the house of two  brothers, Kayaram and Musuram Kashyat and threatened to expel them from the village if they did not renounce Christ, said Rev. Rakesh Dass. Early the next day, the head of Gunia village, Lohandiguda, Jagdalpur, summoned the brothers to his home, where the two were attacked when they arrived. The brothers were hospitalized and then filed a police report.

March 25 — State police stopped an “Open Special Gospel Meeting” in Nagra, Balrampur Ramanujganj following complaints of forceful conversions against the Christians. Pastor Mukti Prakash Lakra said Believers Church was organizing a three day meeting from 25- 27 March when the angry extremists barged into the three-day meeting. Police arrived and urged the organizers to close down the meeting, which they did.

March 28 — The head of Mokhagoan village, backed by local Hindu residents, urged the government to halt the opening of a day-care center built by Indian Evangelical Mission. “The local area Christians have been facing social discrimination from the extremists because of their faith in Christ for a long time,” Rev. Raja Singh of Indian Evangelical Mission told World Watch Monitor. After a government inquiry into the center’s operations, authorities dismissed the petition to halt operation.

April 2 — A group of Hindus in Chhotesalna, Raipur, burned the small Believers’ Church to the ground after accusing the Christian congregation of forcefully converting members of the community. There were no injuries. Pastor Padam Pande said the Christian community received further threats the next day after they had filed a complaint with police. On April 4 the Christians were summoned to the Village Council meeting, where they were urged to take back the complaint. The Christians refused. To date, police have not taken any action.

April 23 — Police in the Gondia district arrested a Christian couple after Hindus accused them of forceful conversion and bribery. A representative of the evangelical organization Mission India who goes by the single name Geeta told World Watch Monitor that a group of people asked Mission India Pastor Vijay Meshram and his wife to visit a home to pray for the sick. After the prayer was over they asked the pastor and his wife to wait outside. As the couple waited, the host slipped from the back door, where a group of 100 people was waiting for his signal. The mob rushed the pastor and his wife, and accused them of bribery and forced conversions. Later, the Hindus filed a complaint against them, and police arrested the couple under several sections of the criminal code, keeping them in in custody while the crowd swelled outside, shouting anti-Christian slogans. They were released on bail the next day. “There was no case of forceful conversion and it was a false allegation against us, as we were merely praying for the sick people as they requested us” Meshram said.

March 8 — The Global Council of Indian Christians reported a group of Hindus barged into an all-night prayer meeting of The Word of Victory Ministry in Moodubelle village, Udupi and assaulted the participants, accusing them of forceful conversions. The pastor, Robert Lobo, and six believers suffered serious injuries and were treated in Ajarakadu Government hospital. Police arrested 10 attackers.

April 11 — A pastor and his family were hospitalized after an assault in their home in Vijapura, Chitradurga. The Evangelical Fellowship of India reported that a man named Rangappa, his wife and son beat the pastor, Kantharaj Hanumanthappa, and his family, after making several threats and complaining to the village head that the pastor had been forcefully converting residents. With the intervention of the Karnataka Legal Aid Cell, the Bharamsagara police filed a report against the attackers.
Kashmir

April 10 — A pastor in Shivpura, Srinagar, in Jammu & Kashmir state, told World Watch Monitor that he and his family were assaulted by a group of Muslims who had accused him of converting children living in the Agape Home for youth. Pastor Neethi Rajan said the attackers forced themselves into his family’s home, and also damaged a car parked nearby that belonged to a friend. Police took Rajan and his family into protective custody, but the family later relocated to another area out of fear of a repeat attack.

March 24 — Hindu extremists stopped a church construction In Charlapalli, Ghatkesar Mandal, alleging that the church will cause the disturbance in the neighbourhood. The All India Christian Council said a pastor identified as Bhaskar had purchased land for building a church, registered it in the name of “Life in Christ Ministries”, and obtain all required permits. However, as the Christians were digging the ground for the foundation of the church, a group of protesters stopped the construction, and filed a police complaint. Police instructed Bhaskar to obtain permission directly from the most senior local administrator. Other Christian authorities in the areas are intervening to resolve the impasse.

March 25 — Police in Vasnathvihar, Moulali, Hyderabad detained members of God Grace Ministries Church, including a pastor identified as Timothy, after local Hindus filed a complaint against the church alleging forceful conversions. The All India Christian Council said the congregation is building a church on their own land, which is drawing the opposition of some Hindus in the area.

March 26 — The All India Christian Council reported that a group of Hindus barged into a prayer meeting of Lay Men Evangelical Fellowship in in Langar House, Hyderabad, in the home of K. Kamalamma and started to verbally abuse the Christians, tore Bibles and beat up one participant, Ravi Babu. The Christians filed a police complaint and an investigation is going on.

March 1 — A Christian family was beaten and chased from their village after they refused to pay tributes to idols and spirits of Hindu festivals. Rev. Christopher Takri told World Match Monitor that Hindu extremists led by Sahadeva Tudu summoned Rabinarayana Marandi to a village public meeting at 6 a.m on March 1 in Bhalutangara village, Kankadahada block, Dhenkanal. There Marandi was threatened with assault and banishment from the village if he did not give contributions towards the Hindu festivals. “The extremists asked Marandi to give a chick as an offering for a new baby boy to the idols, and the extremists beat him up when he refused,” Takri said. “The attack last for half an hour.” Unwilling to comply, Marandi and his family were chased out and are now taking shelter in their in- laws house in another area. , Monoranjan Mohanti, area Superintendent of police, told World Watch Monitor “Legal actions will be taken against the wrongdoers,” but declined further comment.

March 10 — A Christian convert fled his home in Dengabahalli, Dhenkanal, after hearing threats he and his family would be killed. “The Hindu extremists were planning to kill him that night” said a church leader, Rev. Christopher Takri. But the convert, Mohan Soren, and his family fled the village and took refuge in the house of a Christian leader in another area, Takri said.