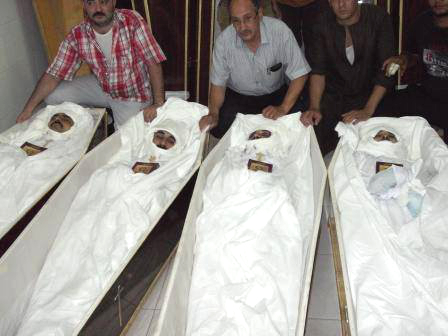 Violence across Egypt following the July 3 ouster of Mohamed Morsi has claimed the lives of at least six Christians, while scores of their homes, and a number of churches, have been ransacked.

Egyptian Christians who took part in the widespread anti-Morsi protests on June 30 were only one segment of the opposition, but were a conspicuous segment. Coptic Pope Tawadros II, reversing the course of previous, less outspoken popes, voiced his support of the anti-government demonstrations. He appeared on television on July 3 alongside Egypt’s military leadership as it announced the removal of the president.

Supporters of Morsi have directed a measure of their anger at Grand Mufti Ahmed al-Tayeb, Egypt’s highest-ranking Sunni legal official, who endorsed Morsi’s removal and also attended the military’s announcement. But backlash has flowed in many directions, sometimes targeting Christians.

Some of the most violent episodes have occurred in the lawless north Sinai region, where on July 6 gunmen shot and killed a Coptic priest, Mina Abboud Sharubim.

Accounts of his death differ: The Egyptian Initiative for Personal Rights, a Cairo-based group, released a detailed account that said the priest was killed while driving his car from his home to Mar Mina Church in the Masaid area of Arish, about 50 kilometres west of the border with Israel. The Associated Press reported Sharubim was killed while he was walking in a market.  A Christian resident of El Arish told World Watch Monitor that Sharubim was in his car in front of a church building in the Masaid area when he was shot. 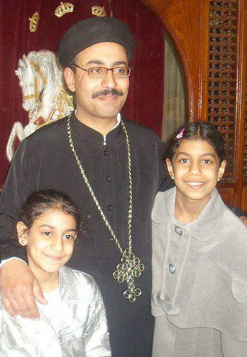 Coptic priest Mina Abboud Sharubim and his daughters in an undated photo.Special to World Watch Monitor

“Father Mina was a good priest,” the resident told World Watch Monitor, which is withholding his name for safety reasons. He said Sharubim, ordained in 2012, was 39, married and had two daughters.

“All the Christian families in El Arish loved him,” he said. “He was like an angel.”

Five days later in Sheikh Zuweid, a remote settlement a few kilometres west of the Israeli border, the decapitated body of Magdy Lamei Habib, a Christian electronics merchant, was discovered. He had been abducted on July 6 while at the Sheikh Zuweid market, according to the Egyptian Initiative for Personal Rights.

“There is a situation of panic and fear among all the Christians here and there is no protection for us,” the Arish resident told World Watch Monitor. He said his own home had been ransacked and his car stolen, and that churches have closed and seven Christian families have left Sheikh Zuweid and Rafah, a nearby town that sits on the Egyptian border with Gaza.

In its detailed account, published on its website, the Egyptian Initiative for Personal Rights said events unfolded this way:

The body of a Muslim man was found dead on the evening of July 4. The victim’s family accused an 18-year-old Christian man, Sobhi Magdi Eskander, who was beaten and stabbed the next morning before being hospitalised. 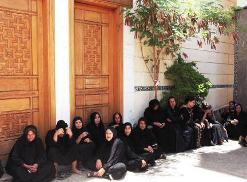 Residents of al-Dabayia take refuge in the Church of Mar Youhana during July 5 violence in the town.Special to World Watch Monitor

A crowd of hundreds moved through the town on July 5, attacking Christian homes throughout the day. Some Christian families fled to neighbouring villages, while others were trapped in their homes, and some took refuge in the Church of Mar Youhana in al-Dabayia.

Several times throughout the day the mob attacked the home of Emile Nessim, a member of Tamarrod, the group that played a key part mobilising the nationwide anti-Morsi demonstrations. By evening attackers had climbed to the top of his roof, then found him hiding inside, where they beat him with pieces of iron. He was taken to the hospital where he later died. His home was burned to the ground.

In all, four Christians were stabbed and clubbed to death during the violence in al-Dabayia, according to the Egyptian Initiative for Personal Rights. Several more were injured.

A resident of the town who works at St. Mary Church in Luxor and serves at the Church of Mar Youhana told World Watch Monitor that members of the Muslim Brotherhood from al-Dabayia and surrounding areas were among the crowds marching on the Christian homes. World Watch Monitor is withholding his name for safety reasons.

In other areas across Egypt, crowds angered over Morsi’s removal assaulted churches and homes.

On the day of the military’s government takeover, the Mar Girgis Catholic Church in Dalga, a village near Deir Mawas city south of Cairo, was set on fire. Muslims yelling “Islamic, Islamic, we want legitimacy” rushed past abandoned security posts and destroyed the ground floor of the three-storey building, the Egyptian Initiative for Personal Rights reported.

The group said the angered Muslims moved through the streets, hurling objects at Christian homes, and looting Christian-owned stores. One man retreated to his rooftop and began firing gunshots, injuring six. In turn, someone in the crowd shot the man’s wife, causing injuries that required hospitalisation.

A Christian man living in Dalga told World Watch Monitor that in all, seven Christian homes were looted and burned. His name also is being withheld to preserve his safety.

Elsewhere in the town, a crowd broke into the Islah Church and looted it, the rights group reported.

• July 3: In Masa Matrouh on the Mediterranean coast, Morsi supporters threw firebombs at Coptic Orthodox Church of the Virgin.

• July 4: pro-Morsi marchers hurled rocks at Mar Mina Church in Minya. A few days later, distinctive markings were found on several shops owned by Copts, an on a Coptic orphanage.

• July 5: authorities used tear gas to turn away hundreds of people who attempted to storm the Orthodox Coptic bishopric in Luxor.

• July 9:  Shots were fired at Mar Mina Church in the Manakh area of the Port Said governorate.