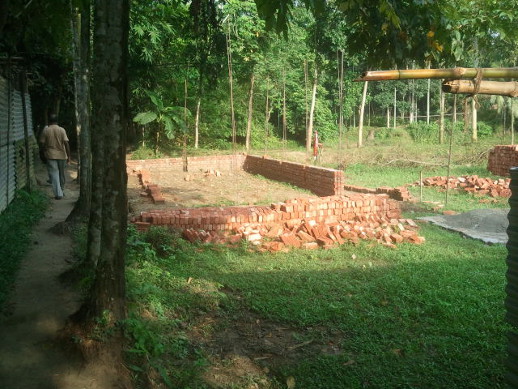 A local government official in central Bangladesh has halted the construction of a church, forced Christians to worship at a mosque and threatened them with eviction from their village unless they renounce their faith.

The Tangail Evangelical Holiness Church in Bilbathuagani village, Tangail district, about 100 kilometres north of Dhaka, was created Sept. 8 by a group of about 25 Christians who had been meeting secretly for three years.

However, local council chairman Rafiqul Islam Faruk joined around 200 demonstrators Sept. 13 to protest against the start of the building of the church.

The following day, the Christians were summoned to his office. More than 1,000 Muslims waited outside, following an announcement at all local mosques to gather at the chairman’s office.

“The chairman and the imams of the mosques interrogated me for accepting Christianity. They asked me why I had become a Christian. It is a great sin to become a Christian from Islam,” Asli said. “If I did not accept Islam, they would beat me, burn my house, and evict me from the society.

“Their threats chilled me to the bone. That is why I pretended to accept Islam, but faith in Christ is the wellspring of my life. Now I am no longer a Muslim; I am a Christian.”

Mojnu Mia, 31, told World Watch Monitor he was also forced to accept Islam against his will.

“The chairman and the imams asked me what my religion is. I said I was a Christian. Then they threatened to beat me and evict me from the village unless I recanted my faith in Christianity,” Mia said.

“They had browbeaten me into accepting Islam. I accepted it only to get out from that predicament. But later, I embraced Christianity by swearing a confession in the court.

“The chairman came to know that I became a Christian again, by affidavit. He threatened that it would not be possible to practise Christianity in that area. If I stick to this religion, I must leave this place.

“The chairman is clipping the wings of our faith. I do not know how long we can grin and bear it. We want religious freedom. We want to practise our religion freely.”

Eight Christians agreed to return to Islam since Sept. 14, under the chairman’s orders. The chairman and his associates had already beaten some of those Christians three years ago for accepting Christianity.

Local chairman Faruk told World Watch Monitor that some Christians had been acting against Islam, due to their incorrect interpretation of the Qur’an.

“The Imams and other elders of the society called them for rectification because of their aberrant behaviour. They were derailed, so we tried to put them on the right track,” he said.

“Eight people who had deviated came back to Islam. We are trying to bring back others. To change a religion, a person needs to swear his or her name, and should inform a local magistrate. If the magistrate permits, then he or she can change religion. But what they are doing is completely wrong.”

World Watch Monitor asked Faruk if he would protest if any of those people filed an affidavit with the court re-affirming their Christianity.

Faruk said there would be “huge pressure from the society against it. As a representative of the local people, I cannot go against the public sentiment.”

The chairman warned the Christians not to resume the construction of the church, saying it was anti-Islamic.

The Bangladesh constitution grants every citizen the right to profess, practise or propagate any religion. Every religious community or denomination has the right to establish, maintain and manage its religious institutions.

Rev. Mrinal Kanti Baroi, the group’s leader, told World Watch Monitor they had tried to show the constitution’s clause on religious freedom to the chairman, to no avail.

“We took one copy of the constitution to the chairman and other elders of the society, but they did not listen to us and did not want to see it,” Baroi said.

On Sept. 15, members of the congregation wrote a letter to the district administrative chief, requesting safety and protection.

Deputy commissioner Anisur Rahman of Tangail district told World Watch Monitor that necessary steps had been taken to ensure their safety and security.

A plea for harmony

Bangladeshi Prime Minister Sheikh Hasina, who has been leading a secular government in the Muslim-majority country since 2009, on Sept. 3 called upon her countrymen to work together to protect the communal harmony “being nurtured in the country for thousands of years”. She  made her remarks after inaugurating reconstructed Buddhist temples, which had been damaged and burnt by criminals in September 2012.

The United States Commission on International Religious Freedom removed Bangladesh from its Watch List after the victory of Sheikh Hasina’s Awami League in the 2008 general election. Her centre-left party is considered to promote secular policies and to be favourable toward minority rights. Her announcement to implement religious freedom reforms was another cause for Bangladesh to be removed from the Watch List.

Of Bangladesh’s 154 million people, Sunni Muslims constitute 90% and Hindus 9%, according to the 2001 census. The remaining 1% is mainly Christian and Buddhist.