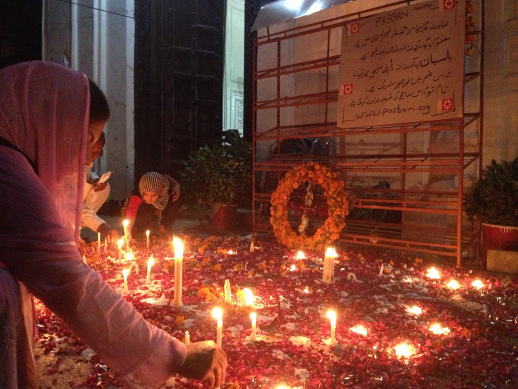 Memorials for the victims of the bomb attacks at All Saints Church in Peshawar.Kamran Chaudhry for World Watch Monitor

The decorations have been put up, carol services have begun and small celebrations are being planned, but the festive spirit is marred by anxiousness and insecurity among Pakistan’s small Christian community.

This year has been one of the worst years for the country’s roughly 4.5 million Christians, approximately 2.4 % of the population. In September 2013, 96 people were killed and some 130 wounded in twin suicide attacks on a church in Peshawar – the most deadly such attacks since independence.

“We love to celebrate Christmas, people love to go to church, but they are insecure this year,” says Romana Bashir, one of the country’s leading Christian activists. “They are conscious of the danger; they know the State can’t control suicide attacks. If the State can’t, what can the people do? They can only pray.”

Security for Christians in Pakistan has deteriorated in recent years, but the attacks on All Saints Church in Peshawar were a turning point because they were the first targeted suicide attacks on the community and it sent out a message that their places of worship were no longer safe.

Arif Gill, also a Christian activist who works with the Peace and Development Foundation, says that this year’s festivities are likely to be slightly lower in profile and that most sermons will be reflective of the September tragedy and other targeted attacks the community has faced.

In March this year a Muslim majority crowd went on a rampage in a Christian colony in Lahore, burning two churches and more than 100 homes and shops.

The Tehreek-e-Taliban Pakistan (TTP) claimed responsibility for the Peshawar attack, but other militant groups such as the Lashkar-e-Jhangvi and Sipah-e-Sahaba Pakistan, operating in Punjab, have been responsible for spreading messages of hate and for a host of attacks targeting religious minorities in the country. Christian and other minority activists are critical of the government’s role, accusing them of both tacitly supporting these groups and failing to provide security for minorities.

“The militants can do anything and get away with it. The government does nothing. They have complete impunity,” said a minority activist who did not want to be named. In 2013, Pakistan was the highest riser in a global ranking of countries where people are most under threat of mass killings.

While international attention focuses mainly on the Pakistani Taliban, there are a number of other Islamic extremist groups and preachers in Pakistan who also spread messages of hatred. They share a similar religious ideology, which views religious minorities and some Islamic sects as infidels. They preach messages of hate against these communities and at times publicly advocate for their killing. 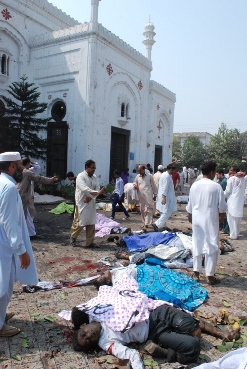 The carnage outside All Saints Church after the bomb blast.World Watch Monitor

“Intolerance has definitely risen in the last few years. I see and experience things now that were unheard of 20 years ago,” says Ihthisham Ravi, Christian theologian and youth worker in Rawalpindi.

The country had constitutional provisions protecting minorities, though these were subsequently weakened by new laws brought in during the dictatorship of General Muhammad Zia-ul-Haq in the late 1980s. Zia-ul-Haq spearheaded an Islamisation campaign that resulted in a number of constitutional and legal changes restricting the freedom of religion or belief of non-Muslims in the country.

“It is an ideology that is widespread now, that sees Muslims as being superior; others are heathens, infidels, unclean people. They are targets of hate speech and demonised in the eyes of the average Muslim,” explains a Christian preacher who did not wish to be named.

The situation for Christians in particular worsened after the United States’ 2001 ‘War on Terror’, when they began to be seen as ‘Western allies’ and supportive of US policies. Politics and religion formed a toxic merger that penetrated every level of society, making people who had lived side by side for decades start to become suspicious of each other.

“If you have a problem with your neighbour, or someone in your school or village, it is very easy to accuse them of blasphemy and have them arrested,” an activist said. As a consequence, Christians and other non-Muslims live in a perpetual state of fear.

“I am very much in fear when I give my sermons because even if unintentional, I could be accused of saying something that offends Islam,” Ravi says.

Despite these targeted attacks and rising insecurity, many Christians hold their Pakistani identity close to their hearts. Some have left the country in recent years, but most others are “well rooted and love their country,” Bashir says. Their only demand is for increased security and protection, and an end to the targeting and discrimination. As a minority community, they face constant discrimination in education, employment and have weak political representation.

Bashir and Arif, however, explain that, despite a painful and difficult year for Christians, they experienced great solidarity from some Muslims in their towns and neighbourhoods.

“This year there have been so many attacks and so many religious groups which are targeted, so everyone feels insecure. People feel that if you are suffering, we are suffering, and at the community level we are all finding strength in each other,” says Bashir.

Arif explains that when he returned home after engaging in relief work to help victims of the Peshawar attacks, many of his Muslim neighbours visited him and expressed their concerns and condolences. In Lahore in October, in an unusual display of public solidarity, hundreds of Muslims joined their Christians friends to form a human chain around a church in protest of the suicide attacks.

Christians say that it is on this new-found sense of solidarity and strength that they are basing their hopes for 2014, a year which given Pakistan’s deteriorating security and human rights situation does not otherwise hold much promise for its religious minorities.