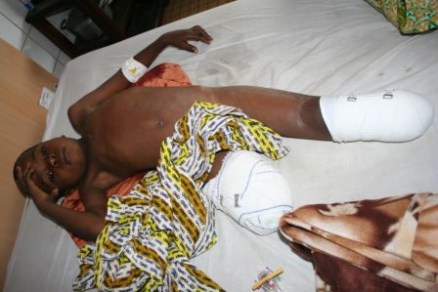 Dozens of people are being treated in the corridors of overcrowded hospitals.World Watch Monitor

In the next three days, more than 400 people were killed in Bangui alone, according to the Red Cross. Dozens of people bearing gunshot and stab wounds have sought treatment in the corridors of overcrowded hospitals, medical sources said.

The violence started with shots of heavy and automatic weapons on what Msgr. Juan José Aguirre Muños, Bishop of Bangassou, described as “an apocalyptic day”.

“Early in the morning I was at the airport in Bangui when, all of a sudden, hell broke out. Repeated shots were heard,” he said, as quoted by the catholic news agency Agenzia Fides. “A family in the neighbourhood welcomed me into their home. I stayed there for eight hours while the fighting raged. At four in the afternoon, the Archbishop of Bangui, Mgr. Dieudonné Nzapalainga, came to pick me up with an escort of soldiers from the African Mission in Central Africa, and led me to the Archbishopric.”

The Central African Republic has been beset by violence since March, when a coalition of rebel groups, led by Michel Djotodia under the Séléka banner, drove out President Francois Bozizé.

Djotodia took control of a transitional government, but lost control of Séléka soldiers. He disbanded Séléka in September, but its members continue to loot, rape and murder Christians in particular. Since September, the mostly Christian and Animist local population have formed self-defence groups named anti-Balaka, which have attacked Muslims, in turn inviting brutal reprisals from Séléka and raising fears of inter-faith genocide. 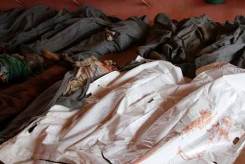 More than 400 people were killed in three days in Bangui alone, according to the Red Cross.World Watch Monitor

On Dec. 5, the UN Security Council authorised the expansion of the African and French military forces currently attempting to maintain security in the CAR, and started planning for the possible conversion of those forces to a UN-managed peacekeeping operation.

A day later, at least a dozen patients were killed when Séléka forces attacked a hospital in Bangui. Gunmen pulled patients from the hospital and shot them, Al Jazeera reported.

Séléka forces broke into the parish of Our Lady of Africa, where a parishioner was seriously injured and the parish rectory was looted. Elsewhere, Muslim communities have been targeted and their shops looted by anti-Balaka militias. A mosque in the 7th district of Bangui was desecrated.

Thousands of people are seeking shelter in churches. Others seek protection at the airport, where French troops and a multi-national African peacekeeping force have their base.

In the town of Bossangoa in the violent northwest, more than 500 houses were burnt in districts bordering the Catholic compound, where nearly 40,000 people – most of them Christians – have sought refuge since September.

In Bozoum, also in the northwest, UN officials received reports of dozens of dead, and there was also violence in the nearby town of Bocaranga. The final death toll is likely to move higher as information continues to come in from other parts of the country, which have been cut off from the capital since last week.

According to the UN refugee agency UNHCR, about 100,000 people have fled their homes in Bangui following recent violence. More than half a million people have been displaced countrywide since the crisis began nearly a year ago.

The Episcopal Conference of the Central African Republic condemned the violence by anti-Balaka militias and Séléka forces. In a statement signed by Bangui Archbishop Dieudonné Nzapalainga, the Catholic leadership denounced the use of religious affiliation to justify violence.

“The anti-Balaka is the expression of exasperation of part of the population against the numerous abuses committed by Séléka rebels,” the statement said. “However, we reiterate that all anti-Balaka are not Christians and that all Christians are not anti-Balaka. It is the same for ex-Séléka and Muslims.”