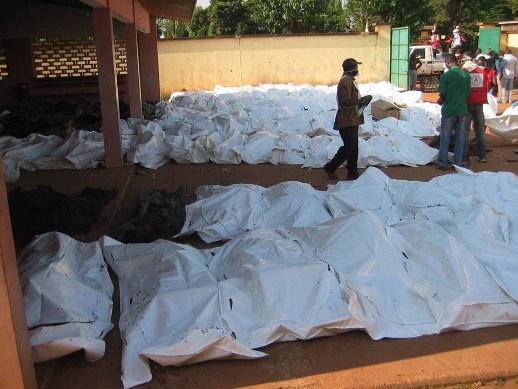 More than 400 people died in three days of violence, according to the Red Cross.World Watch Monitor

Three pastors were among those killed in the recent interfaith violence in Bangui, the capital of the Central African Republic.

Pastors Raymond Doui, 46, Elisha Zama, 33, and Jean-Louis Makamba, 48, were killed on Dec. 5 as members of the disbanded Séléka rebel forces went on a rampage following an offensive by Christian-dominated anti-Balaka militias.

Doui, pastor of the Community of Independent Baptist Churches, died at his house in the northern suburb of Fondo. He leaves behind a wife and 11 children. Zama, of the Evangelical Church of the Brethren, was among those killed as ex-Séléka forces raided a hospital. He leaves a wife and five children. Makamba, pastor of the ELIM Church in the Begoua North area, was killed alongside one of his sons by former members of Séléka, which had entered the church compound. His wife and nine surviving children have fled, after hearing that the rebels were after them.

Another pastor, whom World Watch Monitor is not naming to preserve his safety, is on the run with his family after he learnt that the rebels were looking for him. He is from a Muslim background and went into hiding after the rebels burnt his home and that of relatives living close by.

These incidents highlight the religious nature of the conflict, as Muslims and Christians continue to clash.

In all, more than 400 people died in three days, according to the Red Cross, while dozens have sought treatment in the corridors of overcrowded hospitals.

The number of deaths is likely to be far higher, according to a source cited by Open Doors International, a charity that works with Christians under pressure for their faith. Open Doors quotes the source, not named for security purposes, as saying:

“In reality we must speak of at least 700 dead. The Red Cross has not counted the people that have been slaughtered and thrown into the river or buried directly by relatives or by fishermen.

“In spite of the arrival of the French and the beginning of the disarmament, the killings continue. The war has become purely religious. Anti-Balaka defensive forces attacked the ex-Seleka and other Muslims first. This invited terrible retaliation against the Christians. The ex-Seleka and Muslim men women and children armed with fire arms and machetes went from house to house killing Christians regardless of their age. The streets of Bangui are littered with corpses. The Red Cross buried hundreds of bodies in mass graves.

“Most people are hiding indoors. Some have fled into the bush and about 20,000 Christians fled to the church of Pastor Nicolas Guerékoyamé, the president of the Evangelical Alliance, because he is one of the religious leaders who always denounced the abuses of the ex-Seleka”.

The Central African Republic has been beset by violence since March, when a coalition of rebel groups, led by Michel Djotodia under the Séléka banner, drove out President Francois Bozizé.

Djotodia took control of a transitional government, but lost control of Séléka soldiers. He disbanded Séléka in September, but its members continued to loot, rape and murder Christians in particular. Since September, the mostly Christian and Animist local population have formed self-defence groups named anti-Balaka, which have attacked Muslims, in turn inviting brutal reprisals from ex-Séléka members and raising fears of inter-faith genocide.

On Dec. 5, the UN Security Council authorised the expansion of the African and French military forces currently attempting to maintain security in the CAR, and started planning for the possible conversion of those forces to a UN-managed peacekeeping operation.