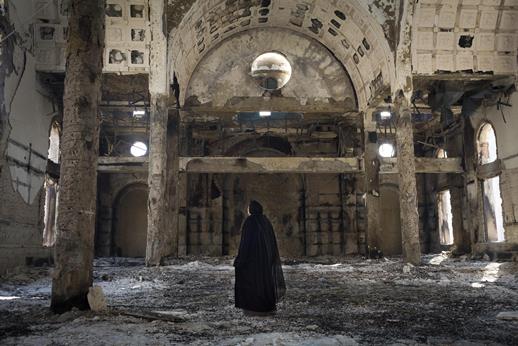 The Bishop Moussa Coptic Church in Minya was destroyted by pro-Morsi supporters in Egypt, many of whom blamed Christians for his overthrow.David Degner, Getty Images

The plight of Christians around the world was discussed in a three-hour debate at the Houses of Parliament in London yesterday.

Members of the House of Commons were told that the persecution of Christians is increasing, that one Christian is killed around every 11 minutes around the world, and that Christianity is the “most persecuted religion globally”.

A long list of countries in which life as a Christian is most difficult was discussed, including Syria, North Korea, Eritrea, Nigeria, Iraq and Egypt.

MP Jim Shannon said the persecution of Christians is “the biggest story in the world that has never been told”.

He said that although the right to freedom of thought, conscience and religion is enshrined in the Universal Declaration of Human Rights, there are many countries in which these rights are not given.

Shannon alleged that 200 million Christians will be persecuted for their faith this year, while he said that 500 million live in “dangerous neighbourhoods”.

He added that in Syria Christians are “caught between opposing sides in the conflict”, and mentioned the “specific targeting” of Christian-dominated locations, such as Sadad and Maaloula.

MP Sammy Wilson said that in Syria, “50,000 Christians have been cleared from the city of Homs”, while in Sudan two million Christians were killed by the regime over a 30-year period.

He added: “Within the last month, hundreds of people, from Nigeria to Eritrea to Kazakhstan to China, have been arrested and put in prison simply because of their faith, and when they go into prison they are denied due process. They are denied access to lawyers. They are sometimes even denied knowledge of the charges facing them. They can languish in prison for a long time and in horrible conditions… This is not only happening in Muslim countries. From Morocco to Pakistan, Christians in Muslim countries are under threat, but it happens elsewhere too.”

The recent comments of Baroness Warsi at a lecture in Washington were echoed, including her assertion that “the parts of the world where Christianity first spread is now seeing large sections of the Christian community leaving, and those that are remaining feeling persecuted”.

MP Nigel Dodds said that the “persecution of Christians is not new”, but that it is “staggering” how many Christians are killed today.

In Iraq, he noted the words of Canon Andrew White, who had said that Christians are “frightened even to walk to church because they might come under attack. All the churches are targets… We used to have 1.5 million Christians, now we have probably only 200,000 left… There are more Iraqi Christians in Chicago than there are here”.

Sir Edward Leigh said the remaining number of Christians in Iraq was likely to be closer to 600,000, but that this was still a shocking figure and that “things have become much worse since the invasion”.

“Within the last month, hundreds of people, from Nigeria to Eritrea to Kazakhstan to China, have been arrested and put in prison simply because of their faith.”

MP Rehman Chishti said: “I come from a Muslim background, and my father was an imam… I know it is absolutely right and proper to have a debate on the subject”. He called the persecution  “completely and utterly unacceptable” and “a very sad state of affairs”.

He also quoted his “good friend” the former Bishop of Rochester, Michael Nazir-Ali: “He told me that the persecution of Christians was taking place in more than 130 of the 190 countries in the world at the moment”.

During the debate, the oppression experienced by Christians in China and Malaysia were also highlighted and outlined. As the British Prime Minister is currently in China, MP David Rutley raised the issue of the sizeable Christian community in China, and asked about the potential establishment of a deeper inter-faith dialogue to engage the Chinese authorities with Christian groups.

Meanwhile, a UK-based organisation has claimed that the number of countries posing an extreme risk to the human rights of their populations has risen by 70 per cent in the past five years.

Risk analysis company Maplecroft (which researched 197 countries for its annual Human Rights Risk Atlas 2014) says that since 2008 the number has risen steeply from 20 to 34, predominantly comprised of countries in the Middle East and Africa.