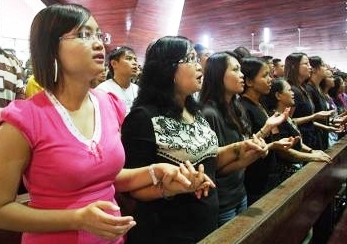 Christians in Sarawak attend Mass at St. Joseph’s Cathedral in Kuching.
The service is held in the Malay language, which uses the word ‘Allah’ for God.The Malaysian Insider

The ruling that the use of the word ‘Allah’ for God is banned for non-Muslims in Malaysia hit global headlines in Oct. 2013. As 2014 starts, the latest development in the continuing row has triggered more furious debate in Malaysia.

On January 2, in the richest and most populous state of Selangor, near the capital Kuala Lumpur, over 20 officers, four from the top Islamic authority, the Islamic Religious Department (JAIS), together with the police, raided the Bible Society of Malaysia (BSM). Despite the lack of a search warrant, more than 330 copies of Bibles in Malay and Iban languages were confiscated.

The BSM President Rev. Lee Min Choon and its office manager Sinclair Wong were immediately taken to the local police station and released on bail two hours later. They are expected to see JAIS officers on January 10 to discuss the matter.

Reuters reports that it was the first time Islamic authorities have entered premises belonging to a Christian organisation to carry out a raid.

In its official statement, BSM said that it was “deeply shocked that JAIS, whose legal powers are limited to policing Muslims, are now exercising powers over non-Muslims. BSM is of the view that this action contravenes a host of legal provisions, including that of the Federal Constitution. This is a sad day heralding the erosion of minority rights. BSM also calls upon the Christian community to remain calm and to display their best Christian character and virtues of love and forgiveness in this situation”.

Malaysia Today reports that in the aftermath, the minister for Islamic Affairs in Selangor’s state government (which is ruled by the opposition to the main national ruling coalition party, UMNO) said JAIS officers involved in the raid were summoned to provide an explanation of their actions.

The minister, Sallehin Mukhyi, said JAIS’s actions were carried out without consultation with the state executive council. “This is not a small issue. It affects the rights of people of other faiths, so we have to be careful in these matters,” he said. 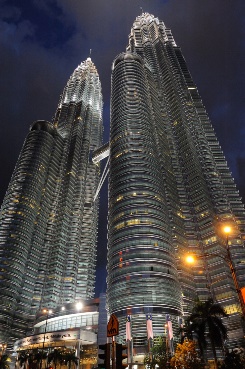 The raid on the Bible Society took place in Selangor State near Kuala Lumpur, home of the Petronas Towers.Christopher Swerin / Flickr / Creative Commons

The raid came against the background of a call by UMNO for a protest outside all churches in Selangor State on January 5 unless the editor of the Catholic Herald apologises for insisting on his religion’s use of ‘Allah’. He has been given a deadline of January 4 to withdraw his remarks.

Since the October 2013 Court ruling, heated debate has continued over the legal right of Christians (and others) to use the word ‘Allah’, the Arabic term for God, in the Bible, other printed materials, and worship services. A week before the raid, the newly appointed director of the Selangor JAIS, Ahmad Zaharin Mohamed Saad, had demanded that local churches comply with the Selangor Non-Islamic Religions Enactment of 1988, which bans non-Muslims from using 35 Arabic words.

Saad’s instruction had been countered by the editor of Catholic newspaper, The Herald, who said that Catholic churches would persist on using the word ‘Allah’ in their weekend services. UMNO groups responded by threatening to hold protests.

The dispute began in 2008 when The Herald weekly was banned by the Home Ministry from using the word. The Catholic Church contested the rule and won back their constitutional right in 2009, only to lose it again after the Court of Appeal overturned the decision in October 2013. The prohibition, nevertheless, was limited to printed publications and seizure of religious materials containing the word ‘Allah’. It is still not completely clear whether verbal use, including in worship services, is affected by the ruling.

The Bible Society of Malaysia says that JAIS breached the 10-Points Solution jointly crafted by the Federal Government and the Christian community in March 2011: the agreement allows Bibles in all languages to be imported into or printed in the country, as well as to be transported freely between East and West Malaysia.

“BSM calls upon the Government to uphold its part of the agreement and resolve this delicate issue of the BM (Bahasa Malay) Bible with JAIS,” it demanded after the arrests.

Malaysia Today reported that some militant Islamist groups in Selangor supported the raid, such as in Klang, a fast-developing town in Selangor State. After the raid, it reported that the Klang Muslims Solidarity Secretariat, a coalition of Malay-Muslim groups, urged JAIS to conduct more raids and Bible seizures. The Secretariat revealed a plan to hold a rally at the Catholic Church of Our Lady Lourdes in Klang on the morning of January 5 to protest against the Christians’ insistence in using the term ‘Allah’.

“This is a sad day heralding the erosion of minority rights.”

As tension rose, church leaders in the region shared their views, concerns, and forecasts for the year with World Watch Monitor.

“JAIS has acted beyond its authority and overstepped the religious rights of non-Muslims. There is no more freedom under the Federal Constitution. We feel it’s not right for anyone or any religious group to tell us how we should worship and practice our faith,” said one pastor, who preferred to remain anonymous. “Persecution has started in Malaysia.”

Another pastor, whose church mostly consists of Muslim converts to Christianity, said: “We had decided even before this that it would be business as usual for us as a church.  We will continue to use the word ‘Allah’ in worship.” When asked to predict what 2014 would bring, he answered: “We can expect more extreme acts of intimidation. Whether it will come to actual physical persecution and bloodshed, it’s hard to tell.”

Many church leaders affirmed that the raid has resulted in heightened fear and a sense of insecurity and powerlessness for Christians in the country. Some leaders also foresaw the possibility of Bible shortages in the native language of Malay. “Not only that, underground churches will be further ostracised and left to fend themselves,” added one of them.

Another church leader said: “We already know that there may be a price for the Malaysian church to pay before there can be a breakthrough in our nation. What, how, and when? Only the Lord knows.”

According to the 2010 Malaysian government census, Christians make up about 9.2 percent of Malaysia’s population. The majority of them live in East Malaysia, concentrated in the states of Sabah and Sarawak. The BSM Bibles confiscated on Jan. 2 would have been shipped to there for the benefit of Christian churches and communities.

However, many Christians have moved to Peninsular Malaysia (which has 80% of the country’s population, of which only 3% is Christian) in recent years for work.