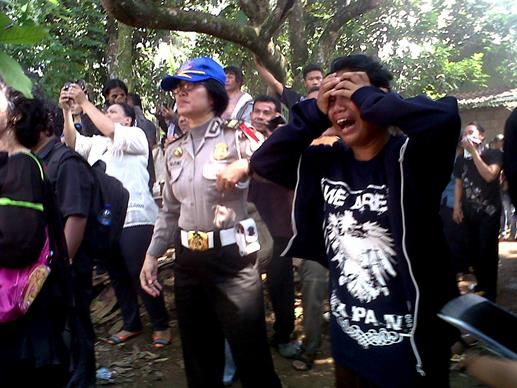 The Batak Protestant Church near Jakarta was torn down in March 2013, just after being built.World Watch Monitor

A new report paints a bleak picture of religious freedom in Indonesia.

Indonesia: Pluralism in Peril, which was launched at the UK Parliament yesterday (Feb. 25), says that in the world’s most populous Muslim nation (251 million, 86% Muslim), minority religious groups such as Christians are subject to “spiralling intolerance”, which threatens to destroy Indonesia’s erstwhile reputation as a place of inter-religious harmony.

The report, written by Christian Solidarity Worldwide’s East Asia team leader Benedict Rogers, says extremist ideology has spread nationwide; that local, provincial and national authorities have been guilty of inaction and complicity; and that the majority of Indonesia’s Muslims have failed to speak out against intolerance.

While stressing that he deeply admires all Indonesia’s achievements as a multi-faith society, Rogers says that as it approaches national elections this year, it is “crucial” that the new President, who in July will replace Susilo Bambang after a decade in office, steers the country back towards its roots as a pluralistic nation whose founding motto was “Unity in Diversity”.

The government’s stated ideology of ‘Pancasila’ has at its base communal peace and monotheism. Only six religions are officially recognised: Islam, Hinduism, Buddhism, Confucianism, Catholicism and Protestantism. But Rogers’ report notes that almost all of Indonesia’s minority religious communities have been affected by intolerance, including Catholic and Protestant Christians, Ahmadis, Shi’a and Sufi Muslims, Buddhists, Hindus, Confucians and Baha’is.

For examples of actions against Christians, Rogers notes the closing down of 17 churches in the space of three days in the Aceh region of northern Sumatra in May 2012; and the closure of two churches in West Java, despite court approval in Jan. 2011 saying they should be allowed to open.

The report states that a variety of radical Islamist organisations and political parties have emerged and gained “disproportionate influence” over policymaking. Rogers says that it is “clear” that ministers, including President Bambang, have not merely shown weak governance by yielding to their demands, but have been “proactively complicit”.

Perpetrators of violence against minorities are reported to have been allowed to act with impunity or to receive disproportionately small penalties, such as those sentenced to between four and five months in jail after being found guilty of destroying churches in Temanggung, Central Java.

Speaking at the London launch, Father Antonius Benny Susetyo, Executive Secretary of the Interfaith Relations Commission of the Indonesia Catholics’ Bishops Conference, said that many factors have contributed to the rise of intolerance. He says the President had compromised with the Ulemas’ Council; that radical groups get police protection; and that economic inequalities also contribute. He pleaded for a President “who will unite Indonesia behind its Constitution, which protects all citizens, including atheists”.

Furthermore, Rogers reports of a “new phenomenon” of “criminalisation” of religious minorities on fabricated charges. This occurs, writes Rogers, “even after they themselves have been attacked and the perpetrators of the attacks have not been brought to justice”.

Rogers also asks for more support from moderate Indonesian Muslims, saying that while many may oppose extremism and intolerance, a “growing number” have been radicalised.

Rev. Favor A. Bancin, Executive Secretary for Inter-Faith Relations for the main Protestant umbrella organisation, known as PGI, said at the launch that he and his fellow speakers love their country. When sometimes accused of talking too much about intolerance, he said he responds by pointing to incidents such as a church torn down near Jakarta in 2013, just after construction had been completed, or churches in West Java that remain closed two months after protests by Muslim hardliners.

“In the last four months alone, at least half a dozen reports have emerged of forcefully closed churches or churches that were not allowed to be built,” he said. “It is great that Christian Solidarity Worldwide highlighted once more the situation of religious minorities in the country, as Indonesia is in danger of losing its tolerant reputation.”

Müller added that the fact that Indonesia’s President was presented with an award last year for his work as a as a world statesman who promotes religious tolerance should be viewed only as a “smokescreen”.

“The President was quite successful in travelling the West and highlighting an atmosphere of tolerance. He even received a human rights prize. The smokescreen set up by the Indonesian government should not deceive anybody and the published report helps in talking facts,” he said.