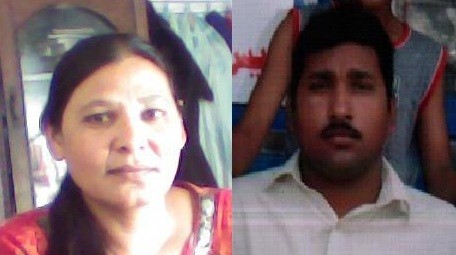 Shaguftah Emmanuel, left, and her husband, Shafqat, in separate and undated photos.Contributed photos

Shafqat Emmanuel, 44, and his wife, Shaguftah, 41, residents of Gojra, Punjab, were accused of sending blasphemous text messages. Gojra Additional Sessions Judge Mian Amir Habib, who conducted the trial, convicted them April 4 and pronounced their death sentences. An appeal is planned.

The complainant, Muhammad Hussain, had alleged he was busy in prayer on July 18, 2013, when he received blasphemous text messages on his cell phone.

Gojra City Police Station House Officer Muhammad Nisar told World Watch Monitor that Hussain’s call data revealed the messages were sent from Shaguftah’s cell phone number. The police were, however, unable to recover the SIM card from Shaguftah’s phone, while Shaguftah asserted that she had lost her cell phone a month prior to the incident.

Nevertheless, the Gojra police detained the couple, along with their four children, and pressured them to name someone who could have sent the messages.

Nisar told World Watch Monitor that a large number of Islamic clerics became enraged when they heard of the text messages, and that they remained in the police station until a police case was opened.

Police formally arrested the couple on July 20 and sent them to Toba Tek Singh District Jail the next day.

“Shafqat has admitted to the police he sent the blasphemous messages and gave his statement to the judicial magistrate,” Nisar said.

“Investigation should have been done by the senior superintendent before lodging the case, but here the police have (already) extracted a confession from Shafqat, which is illegal,” he said.

Islamists staged a sit-in on a major Gojra crossing, Mankanwala, on July 23, 2013, and demanded death for the couple.

Another attorney for Shafqat and Shaguftah told World Watch Monitor the police were unable to provide any substantial evidence during the April 4 trial to connect the couple to the offending text messages.

“The police could neither recover the SIM nor submit the service provider’s record that the same number was issued to Shaguftah,” said Nadeem Hassan. He said on the day of final arguments, several lawyers from the city of Lahore had come to represent the accuser, intimidating the judge. “The judgment has been influenced and the order is pronounced under pressure,” Hassan said.

The Anglican Bishop of Gojra, John Samuel, pointed out that hundreds of lives had been affected when at least seven Christians – six from the same family – died in August 2009 when a mob attacked the Christian Colony in the couple’s hometown, Gojra.

He said a similar situation arose in the Joseph Colony in Lahore in March 2013. “But Pakistan’s justice system could not punish a single person for violence against Christians. On the other hand, a Christian couple has been convicted without sufficient evidence.”

The couple’s lawyer Hassan said that an appeal against the verdict has been prepared and will be filed soon.

Bishop Samuel said Shafqat’s backbone was fractured in an accident in 2004 and since then he is in a wheelchair and has a catheter. The Bishop said Shaguftah became the only breadwinner for the family’s four children, ages 5 through 13. She worked in a local missionary school. The Bishop said Shafqat’s condition requires medical attention, which would be lacking in jail.

Only days before the couple’s arrest, a man in a separate case was sentenced to life imprisonment for allegedly sending out blasphemous text messages in a case lodged Dec. 28, 2011. The Lahore High Court threw out the case against Sajjad Masih on Oct. 14, 2013, ruling he could not be tried for the same offence twice.

Other cases registered against Christians based on blasphemous text messages:

In May 2006, Qamar David was accused of sending blasphemous texts to various Islamic clerics in the city of Karachi. He was convicted in February 2010 and died in prison in March 2011.

Hector Aleem and Bashar Khokhar were accused of sending offending text messages in January 2009. They were acquitted in May 2011.

Sixteen-year-old Ryan Stanton was charged with sending blasphemous text messages in October 2012. He fled the country, sought refugee status in Sri Lanka, and is still there.

Pastor Zafar Bhatti was accused of sending blasphemous texts in November 2012. He is in Rawalpindi Adiala Jail, awaiting facing trial.