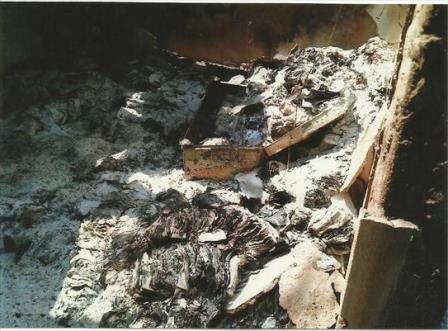 On April 8 radical Muslims set fire to the Baptist Church in Dombia, CAR. The chapel that can hold about 1,000 members was still burning the next day.World Watch Monitor

For many Christians in the Central African Republic, Easter was synonymous with tragedy, adding to their already difficult circumstances. Two priests were killed, four others briefly detained and a number of villages were attacked by ex-Seleka fighters in recent days.

On Good Friday, April 18, a Catholic priest was killed by armed men linked to ex-Seleka rebels, near Bossangoa in the north.

Father Christ Forman Wilibona, 37, was on his way back to his Saint Kisito Parish of Paoua, on his motorbike, when he was attacked near the village of Tale (about 35 km from Paoua).

He had earlier celebrated an Easter service at Ouham-Bac, near Bossangoa. His bullet-riddled body was found and then buried beside the road by villagers alerted by the noise of firearms, World Watch Monitor has learned.

His belongings along with his motorbike were stolen by his attackers. The next day a Red Cross Team, escorted by African Peacekeepers (MISCA), exhumed his body and transported it to Paoua where he was buried.

Fr Wilibona was consecrated priest in October 2007, before becoming the Bishop of Saint Kisito in November 2012. His killing is the first assassination of a Catholic priest since Seleka rebels were disbanded last year.

On Easter Saturday, April 19, another church leader was killed by anti-Balaka fighters. The circumstances of the killing of Rev Thoma Ndakouzou (42) of the Baptist Church in Mbata about 50 km from Bangui, the capital, are not yet established. He is survived by his wife and seven children. The killing of Rev Ndakouzou is the latest of several Protestant church leaders assassinated since President Francois Bozize was overthrown by Seleka rebels in March 2013.

The first Easter murder took place two days after a brief abduction by ex-Seleka fighters of the Bishop of Bossangoa, Monsignor (Mgr) Nestor-Désiré Nongo Aziagbia, along with three other Catholic clerics.

Mgr Aziagbia, accompanied by Fr Clet Magloire Golo, was driving Fr Dieudonné Yanfeibona and Fr Denis Koyedama to their parish of Batangafo when they were arrested by ex-Seleka rebels at the entrance of the city. They were then taken to Kabo, near the Chad border, before being freed and later airlifted by a French army helicopter to Bossangoa.

The Bishop reported that “the rebels removed my pectoral cross and episcopal ring. Then my three priests and I were taken to Sidot to be killed. At Kabo, our convoy was stopped thanks to the intervention of the international community, and especially of the commander of the local ex-Seleka military, a General, who did not agree with the order of execution. All this happened on Holy Thursday, on Good Friday we were brought back to Batangafo where the commander of MISCA came to pick us up by helicopter in order to take us back home”.

The Episcopal Commission for Justice and Peace (CEJP) in CAR has condemned with the ‘utmost rigor’ the murder of Fr Wilibona. In a statement signed by its chairman, Fr Albert Vanbuel, Bishop of Kaga Bandoro, the Commission has called on the Prosecutor General to investigate this assassination and the attempted abductions.

In the absence of UN peacekeepers – due to be deployed only in September – rebels and militia are still active on all fronts in CAR, particularly in the North.

According to local sources, the town of Paoua (near where Fr Wilibona died) was attacked by armed men from Chad last week. Thousands of homes were burned down and many families decimated.

There has also been fighting between ex-Seleka combatants and international peacekeeping forces in Sibut. In Kaga-Bangoro, suspected Fulani armed men, allied to ex-Seleka, have reportedly set fire to dozens of houses and killed an undetermined number of inhabitants in the surrounding villages. Similar acts of violence were reported in Bossangoa.

The violence has also affected the capital Bangui: two churches have been burned down within a week: the Apostolic Church of “Gbaya Dombia” on April 8 and the Dombia Baptist Church, on April 17. Both incidents took place within the 3rd district of Bangui, a predominantly Muslim area. Gbaya Dombia, a large and beautiful chapel that could hold about 1,000, was still burning the next day; its pastor had been forced some time ago to leave the neighbourhood because of threats.

On April 16 extremist Muslims from one district attacked the nearby Sarah neighbourhood, killing several people, including three members of one Christian family. Casimir Djeroma, along with his wife Pulcherie and daughter Patou died when they refused to answer knocking on their door in the middle of the night. The attackers apparently broke down the door and then shot dead the family. Pulcherie’s body also bore machete wounds. The attack occurred the very night on which the family returned home from a refugee camp, where heavy rain had made living conditions unbearable.

Local sources say that the violence and instability is caused by the return of ex-Seleka forces, and as multiple calls for a ceasefire between the ex-Seleka and anti-Balaka go unheeded.

In his Easter message, the Archbishop of Bangui called on all CAR’s citizens to show forgiveness and reconciliation.

”Therefore, it is time, more than ever, to stop the killing spree, and to forgive and reconcile with each other. Hatred begets only hatred. We are all brothers in humanity [whether we are] Christians, Muslims, anti-Balaka, former Seleka. In a fratricidal war, there have never been winners, but losers”, said Mgr. Dieudonne Nzapalainga.

”Enough blood of our fellow countrymen has flowed”, he added before calling on the authorities of the transition to accelerate the disarmament of ex-Seleka and anti-Balaka militia men, as well as fighters of the LRA rebellion [the Ugandan Lord’s Resistance Army] which is still active in the CAR and elsewhere in the region.

Peacemaking and reconciliation efforts would not be achieved without a ‘rapid’ re-mobilization of CAR’s security forces and the setting up of an enquiry commission for crimes and abuses committed in the country, added Mgr Nzapalainga.