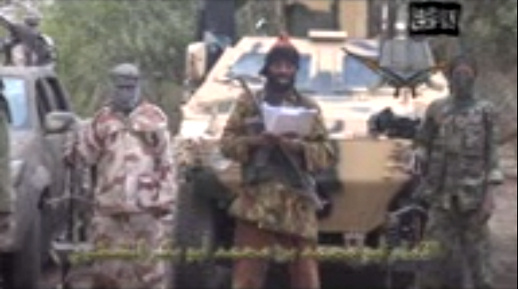 In this image captured from a 57-minute video released May 5, a man purported to be Boko Haram leader Abubakar Shekau says he will sell the girls kidnapped April 14 from school in Chibok village, in Borno state, Nigeria.You Tube

One of the Nigerian girls to escape her Boko Haram kidnappers last month says the men they thought were soldiers threatened to shoot anyone who resisted.

A father of a young woman, among the more than 270 girls snatched April 14 from their school in Chibok village who are still missing, is paralyzed with anxiety, and wonders why school officials insisted that the students stay overnight at the school to complete their exams, despite rumours of impending trouble.

A visiting pastor, ministering to worried families, brings them word of worldwide concern for their daughters.

And as support for a rescue and condemnation of Boko Haram continues to pour in from around the world, evidence is beginning to emerge that the Nigerian government had ample warning that something bad was going to happen in Chibok.

”We were still awake” in the Chibok school dormitory late on April 14, said 17-year-old Joyce, who spoke to World Watch Monitor. Men on several vehicles arrived.

“We thought they were military,” she said. “They ordered us to gather in one place, before setting fire to our buildings. Even our own personal belongings have not been spared.”

The men loaded Joyce and about 300 of her classmates onto the vehicles, threatening to shoot any who opposed them, she said. They drove off into the Sambisa forest.

”They gave us drinks and we were asked to prepare food to eat,” Joyce said. At about 2 p.m. the next day, “as I pretended to go to the toilet, I managed to escape, along with two other classmates.”

They reached a camp of Fulani, an ethnic group of largely nomadic herders, at about 8 p.m., she said. The three girls spent the night at the camp, then reached their homes the following day, exhausted.

In total, about 40 of the abducted girls managed to escape. More than 270 remain unaccounted for.

One of them is the 20-year-old daughter of a man who lives in a village near Chibok.

”We live in anxiety day and night,” said the man, whose name is being withheld by World Watch Monitor to protect his safety. “We are idle, while the rainy season (for farming) has started. We mourn and pray day and night for the return of our daughters.”

Chibok is a predominantly Christian enclave in Muslim-majority Borno state, in Nigeria’s northeastern corner. Christian communities in the northeast have been repeatedly attacked in recent months by Boko Haram, a heavily armed insurgency that aims to impose its version of Islamic law across the country. Borno is its stronghold.

On Friday, Amnesty International released a report claiming Nigerian government officials had at least 4 hours’ advance notice of the impending Boko Haram incursion into Chibok. But the report claimed the government could not muster a response, because of “poor resources and a reported fear of engaging with the often better-equipped armed groups.”

The father said rumors were circulating in the region that a Boko Haram attack could be coming at Chibok, where hundreds of girls, mostly Christian, were due to return to school to take exams. Some parents living in Chibok had time to bring their daughters from the school for the night. But others, living farther from the school, could not, he said.

“Many parents living in neighboring villages of Chibok expressed the desire to bring their children (to school) on the day of the exam,” the father told World Watch Monitor, with anger in his voice. “But school officials opposed. Ultimately our children were abducted.”

The father attended a meeting of about 50 parents of still-missing girls in Chibok on Thursday. He said many of those in attendance accused the school of negligence.

“How one can explain the fact that the principal has chosen to keep students on school premises despite persistent rumors about Boko Haram’s attack?” he said. “Also, how can one understand that none of the daughters from school staff families has been abducted?”

The parents are not getting many answers to their questions. They are, however, receiving word of a global outpouring of sympathy, and of anger toward Boko Haram and the Nigerian government’s inability to rescue the hostages.

”We believe they have realized that they are not alone in this difficult circumstances as many around the world support them,” said Rev. Samuel Dali, president of Ekklisiyar Yan Uwa a Nigeria, known as Church of the Brethren, or EYN Church. Most of the affected families are members of EYN Church. Dali and his delegation have been visiting families across Chibok, without security escort.

On Tuesday, a delegation of women visited Chibok to express their sympathy to grieving mothers of kidnapped girls.

”We have come to express to them our compassion,” Dali told World Watch Monitor. “We prayed with them and we urged them to turn to God, as he is the only one who can appease their hearts.”

On Monday, Boko Haram claimed responsibility for the abductions. In a 57-minute video, a man reputed to be Boko Haram leader Abubakar Shekau threatened to sell the teens or to marry them forcibly.

These claims have reinforced the parents’ fears that their daughters will be forcibly married and taken into neighboring Chad and Cameroon. Authorities in those countries have denied any presence of the kidnapped girls in their territories.

Boko Haram is suspected of kidnapping between eight and 11 more girls on May 4, from two villages in Nigeria’s northeast.

The mass kidnappings have prompted anger across Africa’s most populous nation. Hundreds of people, mostly women, marched in Abuja, the capital and other major cities such as Kano, Ibadan, Kaduna or Lagos, calling on the government to do more to rescue the girls.

Boko Haram attacks have claimed more than 1,500 lives since January, despite a year-long state of emergency and the deployment of army to three states in the northeastern region.

On Monday, May 5, about 100 people were killed during a five-hour Boko Haram attack in Gamboru Ngala. Original reports suggested as many as 300 had been killed, but the Associated Press cited a security official who said the actual death toll may be closer to 100.

The upsurge of attacks has cast a shadow on the World Economic Forum on Africa in Abuja, the capital of Nigeria. In a speech to the forum, Nigeria President Goodluck Jonathan said he welcomes support offered by other countries, including the United States, Britain, France and China.

”Your coming here to support us morally is a major blow on the terrorists, and by God’s grace, we will conquer the terrorists,” he said. ”I believe that the kidnapping of the girls will be the beginning of the end of terrorism in Nigeria.” 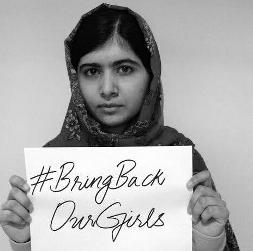 Malala Yousafzai takes up the cause
in this photo on her Malala Fund
Twitter account web page.Twitter / @MalalaFund

The disappearance of the girls has generated headlines around the world and fueled a social-media storm around the tag #bringbackourgirls. Joining the campaign have been public figures such as American First Lady Michelle Obama and Malala Yousafzai, the Pakistani schoolgirl and education advocate who survived a 2012 assassination attempt by the Taliban.

Political leaders have also raised their voices. Nigeria’s military ruler during a portion of the 1980s, retired Gen. Muhammadu Buhari, condemned Boko Haram’s “senseless violence” as he expressed his sympathy to the parents of kidnapped girls.

”That horrific video posted on the Internet is a clear manifestation of the mindlessness of the bigots. It shows them for whom they are, such men cannot threaten nor should they be allowed to violate our sovereignty. It is clear from what they profess that they are not followers of God. They do not mean well for our country and her citizens. I am a Muslim, I am versed in the teaching of Christianity and I understand both religions to seek peaceful co-existence of all humanity” he said in a statement.

Some of the world’s top Islamic scholars have denounced Boko Haram’s violence spree. The Islamic Fiqh Academy, based in Saudi Arabia and part of the Organization of Islamic Cooperation, said the kidnapping “contradicts all humanitarian principles and moral values and violates the provisions of the Quran and Sunnah.”

Meanwhile, the girls who escaped their Chibok kidnappers have been called back to school to compete their exams.