A father and son were killed, and three women and a baby abducted, in an attack in Nigeria’s northern state of Kano, in the largely Muslim area of Tudun Wada. At around 8pm on 15 August, armed men, believed to be local Muslims, attacked the house of Baba Kale Dankali, . . . Read More
May 18, 2017 Nigeria Bauchi, Boko Haram, Kaduna, Kano, Katsina, Plateau, Sharia Gloria Shehu is one of the people in north-east Nigeria set to benefit from the UN’s humanitarian fund targeting the devastation from the conflict with Boko Haram. Yesterday (17 May) the agency stepped up a call for more money, reminding that “the number of people close to sliding from emergency . . . Read More
February 22, 2017 Nigeria Borno, Chibok girls, Education, Kano, Katsina, Muhammadu Buhari, Nigeria, Rape, Terrorism, Women
One of Nigeria’s most prominent Muslim leaders has suggested that polygamy among the poor should be banned, saying that having masses of uneducated, poor children leads to terrorism. Muhammad Sanusi, the Emir of the northern state of Kano, who has four wives, said that polygamy itself is not wrong, but . . . Read More
November 24, 2016 Nigeria Bauchi, Bayelsa, Children, ECWA, Kaduna, Kano, Kidnapping, Nigeria, Sharia, Sultan of Sokoto
More details have emerged of the scale of abductions, forced conversions and then marriage of Christian girls in northern Nigeria. For instance, in the state of Kano in the last five years, over 40 Christian girls have been abducted and Islamised, and many married to Muslims. But locals say many . . . Read More
November 4, 2016 Blasphemy, Boko Haram, Hisbah, Imo, Jama'atu Nasril Islam, Kano, Muhammadu Buhari, Niger, Nigeria, Ramadan, Sabon Gari, Sharia, Sultan of Sokoto 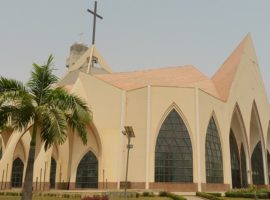 If ever there were a year that made plain the importance of religious freedom, 2014 was it, according to the just-released annual report by an American government advisory group. “By any measure, the horrors of the past year speak volumes about how and why religious freedom and the protection of the . . . Read More
March 27, 2015 Nigeria Elections, Igbo, Kano, Nigeria
An exodus of Christians from the mainly Muslim city of Kano, the commercial centre of northern Nigeria, is taking place because of fears of violence ahead of this weekend’s elections. Thousands are cramming onto coaches and heading to the east or south-west of the country. ‘Kano is closing for business . . . Read More
May 20, 2014 Nigeria Boko Haram, Chibok girls, Goodluck Jonathan, Hisbah, Jos, Kano, Nigeria, Sabon Gari, Sharia 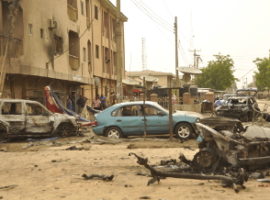 At least five people were killed May 18 by a bomb blast in the Christian district of Kano, in Northern Nigeria. That attack was followed by an even more deadly one on May 20, when two bomb explosions rocked the city of Jos, in Nigeria’s heartland. Two bomb blasts were reported, one . . . Read More