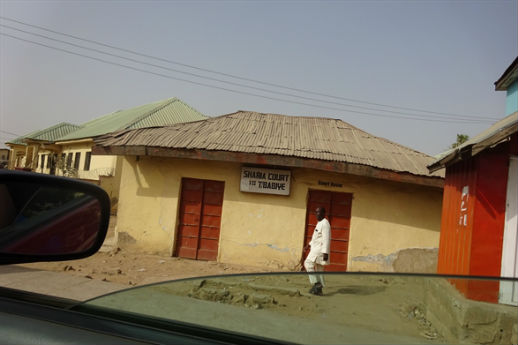 A Sharia court in northern Nigeria.Courtesy of Open Doors

Nigeria’s National Assembly is considering a change to the country’s constitution that would expand the scope of jurisdiction of the country’s Islamic Sharia courts of appeal. Currently, the constitution limits those appellate courts to matters concerning family law. If approved, the change would permit Sharia appellate courts to take up criminal cases, some of which carry the death penalty, arising from lower Sharia courts. Christian churches in Nigeria say the proposal is a step toward Islamizing Nigeria.

What the constitution says now

The Sharia Court of Appeal shall . . . exercise such appellate and supervisory jurisdiction in civil proceedings involving questions of Islamic personal law.

[Read the complete sections of the constitution here]

What the proposed new language says

That’s difficult to say with precision. The proposed language is contained in House Bill 530, but a copy of HB 530 is not included on the Nigeria National Assembly’s usual web page for posting bills. World Watch Monitor sources have not been able to obtain a copy. Nor have Nigerian news organizations published any portion of HB 530 beyond its title.

The sponsor of the proposal, Abdullahi Salame, a lawmaker from Sokoto State, told Premium Times that, if the change is approved, sections 262 and 277 would both read this way:

The Sharia Court of Appeal shall . . . exercise such appellate and supervisory jurisdiction in civil and criminal proceedings involving questions of Islamic personal law.

Another clue is the formal title of the bill:

What are Sharia courts?

Sharia translates to “the path leading to the watering place,” according to Encyclopaedia Britannica, which describes it as “a system of duties that are incumbent upon a Muslim by virtue of his religious belief.”

Nigeria’s constitution, adopted in 1999, allows states to create courts based on “customary law” systems. Twelve northern states, where Muslims make up a majority or plurality of the population, adopted Sharia common courts, nine of them statewide and three of them in areas with especially heavy concentrations of Muslims. Those courts deal with civil and criminal matters. One state, Zamfara, requires Muslims to use Sharia courts in criminal matters. The other states let Muslims choose between Sharia courts and the government’s non-Sharia courts.

Through sections 262 and 277, the constitution specifically allows for Sharia courts of appeal in those states that have set up Sharia common courts. The appeal courts are restricted to civil matters. Criminal matters appealed from Sharia common courts move into the government’s non-Sharia appellate courts.

What is Islamic personal law?

The constitution gives the Sharia courts of appeal the jurisdiction to review cases involving:

What is Islamic criminal law?

The proposed change to the constitution would give authority to Sharia appeals courts to consider “matters of hudud and qisas”:

Qisas provide the means for the victim or the family of a victim of violent crime to obtain retribution, up to death of the perpetrator. [Source: New York University School of Law]

How would this change to the constitution affect Christians?

Abdullahi Salame, who proposed the changes, says Christians would be safer because Muslims fear the eye-for-an-eye character of Islamic law more than they do the government’s penal code.

“With the passage of this bill, no Muslim will ever attempt even to harm, much less kill non-Muslims, because you know Sharia can attend to criminal cases and you will be dealt with,” Salame told Premium Times. “And, in Islam, when you kill a non-Muslim, you will be killed. These Boko Haram and other groups that hide behind any little crisis to attack Christians and other non-Muslims would be easily punished.”

The common Sharia courts — that is, courts below the level of the appeals courts — already have the ability to try cases involving hudud and qisas. The proposed constitutional change would allow the Sharia courts of appeal to hear criminal cases appealed from the common courts.

Not surprisingly, Salame’s view is not universally shared. Christians have opposed attempts to implement Sharia during the drafting of Nigeria’s various constitutions since 1960, when it gained independence, said Danjuma Byang, secretary of the Christian Association of Nigeria in the north-central states of Kwara, Kogi, Nasarawa, Benue, and Plateau, as well as the capital district.

“Nobody has forgotten the hot debates that took place in the Constituent Assembly of 1978, which drafted the 1979 Constitution about the place of Sharia in it,” Byang told World Watch Monitor. “Christian members kicked against the full implementation of full Sharia because non-Christians would fall victim of this law.”

Byang said he had documented, in a book he authored in 1988, several cases of Christians getting caught up in Sharia courts, in Kaduna and Niger states. “Sharia law was used to judge Christians, even though, in all cases, not one of them requested it. Even though they protested against it, they were still judged by Sharia law.” There have been more cases in the nearly 30 years since, he said.

“Muslim leaders have always argued that Sharia law is meant for Muslims only,” Byang said. “But Christians have always refused to buy the argument because in practice, non-Muslims have often been dragged before Sharia courts and have been adjudicated by a legal system repugnant to their faith.”

More than a dozen Christian associations released a joint statement 3 June that said the proposed constitutional amendment is “aimed at expanding the Islamic legal system across a Secular Nigeria State by the back door method using our law makers indirectly.”

It said the proposal is “[I]nsensitive and inconsistent with democratic and republican ideals of the Constitution and the Nigerian State,” and “a desecration of the sanctity of the FCT [The Federal Capital Territory, encompassing Abuja] as a symbol of national unity, which should be preserved.”

The joint statment also catalogued and condemned a wide range of government policies that the Christian groups said have amounted to a gradual Islamization of Nigeria.

Where would the change take effect if it’s approved?

Again, the inability to directly examine HB 530 is a handicap here. The title appears to indicate it would apply to the Federal Capital Territory, and to states that already have Sharia courts in place. Salame has said the same to news organizations.

States that have implemented Sharia courts in some places: 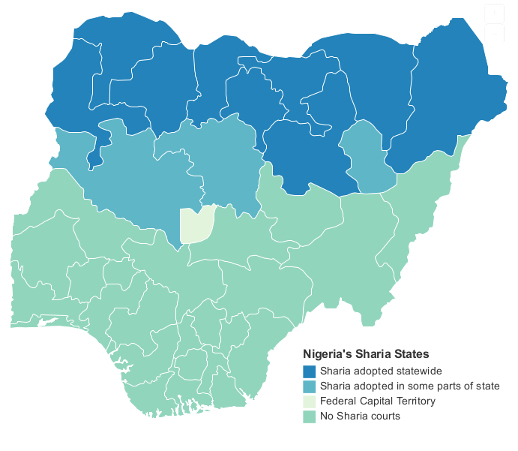 Presumably, the change also would apply to any Nigerian state that might adopt Sharia courts in the future.

What is the status of the proposal?

There is more intrigue here. The bill was introduced in the Assembly on 12 May with a perfunctory first reading, which is typical, and followed by a second reading on 19 May. Under normal circumstances, the second reading is when the debate over a bill occurs. The sponsor of the proposal explains the benefits of the measure. Other members of the Assembly speak for or against it. After debate, the Assembly either assigns the measure to a committee for closer examination, or kills it.

This time, however, Salame’s proposal to change the constitution sailed through the second reading without debate, and was assigned to a House constitutional review committee.

Christian organizations reacted strongly, upbraiding Christian representatives in the Assembly for allowing the measure to pass by unchallenged. News coverage zoomed in on Salame, who in turn said House Speaker Yakubu Dogara, a Christian, had advised him to say nothing about the bill in order to avoid controversy.

“The Speaker considers this bill one of the bills that do not require much argument. Because many people could misunderstand it,” Salame was quoted as saying by Premium Times. “At the committee, they will see the nitty-gritty of the bill. So it was the Speaker that did not allow us to publicly debate on it and he advised that we refer it to the constitutional amendment committee.”

There is still plenty of opportunity to debate the proposal. Changing the constitution requires a two-thirds majority vote of the House and ratification by the assemblies in at least 24 of Nigeria’s 36 states. Assuming the amendment is ratified by all 12 states that currently employ Sharia courts, it would need ratification by at least 12 further states that have not implemented Sharia.

Rev. Gideon Para-Mallam, a key mission leader in Nigeria as the regional secretary in English- and Portuguese-speaking Africa for the International Fellowship of Evangelical Students, was equally adamant.

”Christians are resolved and resolutely opposed to any such proposed bill and amendment,” he told World Watch Monitor. “This is an unwelcome development in the present political dispensation under President Buhari – and at any point in Nigeria. This proposed amendment is a needless provocation which could become a time bomb for this fragile country. Our country does not need such inflammatory political adventure in the name of Islamic Sharia bill.”

Anglo-American law has evolved into emphasizing the integrity of the process rather than the equity of the outcome. The Sharia, on the other hand, leans more towards the pursuit of a just outcome rather than the protection of the legal process.

— “The Politics of the Sharia in Nigeria,” Ali A. Mazrui, Director, Institute of Global Cultural Studies,

The different state governments, in their rush to introduce Sharia to score a political point, disregarded certain fundamental principles of the state’s responsibility toward its population and the generosity, compassion and forgiveness which Sharia advocates toward those accused of crimes were relegated to the background.

While Christians favour a secular government, implied by the constitution, Muslims argue that secularism becomes the religion of a secular state, an ideology with an absolute set of values.