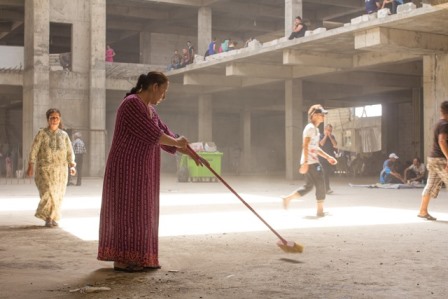 An Iraqi Christian Mikha Qasha, fleeing from Qaraqosh, has given a personal account of members of the Islamic State, IS, coming to his house and threatening him to leave, convert to Islam or face the sword.

Qasha told Mid-East Christian News, specializing in Christian minorities in the Middle East, that IS members gave him a week to think about it; the threat came with weapons pointed at his head.

Elderly and paralyzed, Qasha, was taken away from Qaraqosh by a friend -in his wheelchair. Eventually he found his grandson, who took him to the predominantly Christian suburb of Ankawa in the province of Erbil, the capital of the Kurdistan region.

According to MCN Direct, others who fled from a district in Nineveh, and from Qaraqosh and Bartella, said IS is now imposing a conversion deadline of one week for any non-Muslim. Qasha’s neighbour, a young man who fled the city this week, said he was hiding in his home with his father when IS members found them on August 17. They gave them a week, until August 24, to convert to Islam or be killed. 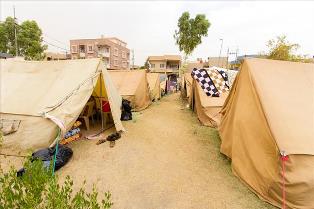 70,000 Christians have arrived in Ankawa, the Christian neighbourhood in Erbil and some 60,000 displaced people are in Dohuk, said Louis Sako, Patriarch of the Chaldean Catholic Church in Iraq.

Dohuk, mainly inhabited by Kurds and Assyrians, is in the north in the autonomous region of Iraqi Kurdistan while Qaraqosh, a town of about 50,000 people in Nineveh Province, sits between Mosul, Iraq’s second-largest city, and Erbil, the capital of the Kurdish region, to the east.

The Islamic State took over Mosul in June. At the time there were 3,500 residing Christians who fled east to Qaraqosh, which is often referred to as the Christian capital of Iraq. Of the 3,500 about 25 people decided to stay home in Mosul. Since then nine have converted to Islam, while the others are paying jizya – the Islamic tax for non-Muslims.

The UN has launched a major aid operation: UNHCR said tents and other goods will be sent to Erbil via air, land and sea beginning Wednesday, August 20.

Christian persecution ‘off the scale’ in Iraq, says Archbishop of Canterbury

The slaughter of Christians and Yazidis in Iraq is “off the scale of human horror,” said the Archbishop of Canterbury on August 18.

Archbishop Justin Welby said that IS members are “particularly savage…In a globalised world where even distant nations are our ‘neighbour’, we cannot allow these atrocities to be unleashed with impunity…The international community must document the human rights abuses in northern Iraq so that the perpetrators can later be prosecuted”. 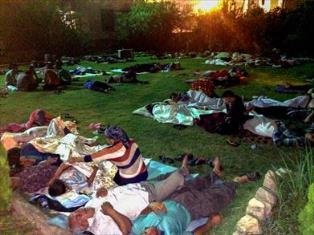 Also on August 18, Pope Francis appeared to endorse military action to stop Islamist militants from attacking religious minorities in Iraq. This is an exceptional statement as it goes against the Vatican’s standard guidance which is against the use of force.

Pope Francis said that he is willing to visit Iraq himself but has been warned against it.

“I am willing (to go there),” he said. “I said if it were necessary when we return from Korea we can go there. It was one of the possibilities… At the moment it is not the best thing to do, but I am ready for this,” he told Zenit news, a Catholic news agency.

Open Doors, an international ministry working with persecuted Christians, has been working through local Iraqi partners across Kurdish Iraq to distribute goods. Its partners have reported that the majority of the displaced people have fled from Mosul, Qaraqosh and other towns and villages on the Nineveh plain.

With such a large influx of internally displaced people, churches in Erbil are running out of space and houses have become full. A local worker told World Watch Monitor, “When the church is full, the people go into other buildings or the halls of the church. If these are full too, then they flow out into the gardens or courtyard of the church. Also unfinished concrete constructions, which have only a few rough floors, are taken by refugees as a place to stay. They are everywhere!”

Open Doors says that it is actively helping local churches and partners to provide basic goods such as hygiene kits and food packages.

Another local worker said “Most had to sleep on the ground. So I decided to try to meet their needs, not only with food, but also trying to provide mattresses and pillows. I quickly started counting the number of people who were there, and it was not only 13 families – as I was told – but more than 50! In total I counted about two hundred people.”

During that same weekend, a church team had organised distributions in and around Dohuk, helping nearly 500 families with food and hygiene parcels.

Those fleeing IS have lost their homes, witnessed killings and suffered sexual violence.

One worker spoke with several families who had fled within the past week.

“The families we met are related to each other and originally from Mosul. They had fled a little while ago to a village near Al Qosh. When the rumours came – about fighters of the Islamic State (IS) coming that way as well -they again had to flee. Now they are in Dohuk. It is terrible what they have gone through.

“Leaving Mosul they had to pass IS checkpoints. One of the women was humiliated at an IS women-only checkpoint when a female fighter pulled down her skirt because it was ‘too tight’. Until the day we visited her, four days later, she was still crying – terribly traumatised by that, on top of having to flee and all the other things she’s seen.”

Calm in the Storm

At a refugee camp on the grounds of a church in Erbil, some joy can be found among the masses of internally displaced people, despite the scorching hot sun where temperatures easily reach to 45 degrees Celsius (113 degrees Fahrenheit). 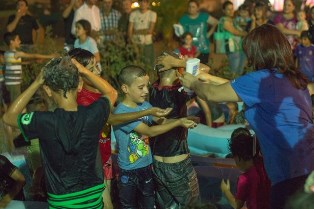 A volunteer reported “To my surprise, I was welcomed into the great stir of things in a refugee camp. A leader of the Chaldean church arranged some games for the men and inflated some little swimming pools for the children. The pools are filled with water so they can cool down a little bit, have some fun and keep up their spirits. At the same time we use some of the pools to wash the hands and heads of the children, so they also get a bath with soap every once in a while.”

“At the same time a group of people stands in line to receive shoes handed out by church workers.”

This group of church workers helps more than 360 families who are staying in Erbil, of whom 216 families live in the church courtyard. Every day they give out breakfast, lunch and dinner to more than a thousand people.

“Help is coming from a lot of different sides. A telephone company is giving free SIM cards away. People send mini-buses to the church to pick up women and their little children so they can shower at their homes. Children get toys to play with. The list of help is endless.”

While such small gestures are welcome – such as a Dohuk barber and his team of five offering a free haircut and a shave for those who’ve lost everything. The question on everyone’s mind remains – how sustainable is life like this long-term?