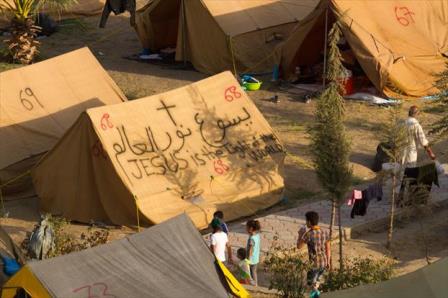 Tents in the yard of a church in Erbil. Pictured are some of the tents of the 216 displaced families who fled the violence of IS fighters.
August 16, 2014
World Watch Monitor

When IS captured Mosul on June 10th the most devastating part of its seizure was its outright targeting of all non-Sunni Muslim groups. This has resulted in a mass loss of life, forced conversions and seizure of homes for Iraq’s minority Christians, Shia Muslims, Yazidis and Turkmen.

Since then, IS has steadily moved north of Mosul into the Nineveh Plain, a predominantly Christian area. In total, more than 100,000 people have had to flee the villages and towns of Qaraqosh, Mosul and the Nineveh plain.

With many thousands of people internally displaced, temporary shelters are overflowing in Kurdistan. Limited resources and so many in need have made an already difficult situation worse.

At the same time reports are coming to light about continued acts of violence committed by IS, as well as of the cruelties resulting from IS’ takeover. Due to the extreme dangers and risks to locals, these reports are often from a single source and cannot be cross-checked.

The Assyrian International News Agency (AINA) reports that the bodies of George David and his son Saad David were recently found by their Muslim neighbour at their home in Bashiqa. The town is historically an Assyrian Christian village in the Nineveh Plain, but is now occupied by IS.

The neighbour noticed an unusual smell, so he entered their home where he found the bodies, and then buried them at a church. According to AINA, he suspected that since both the father and son were deaf and mute they may not have known to leave after IS entered the town.

Also in Bashiqa, the body of a 70 year old Assyrian Christian man was found slumped over in his chair at home.

According to AINA it is believed that all three died from starvation.

Christina
Khader
Ebada,
3 years-old,
abducted
from her
family
by IS at
a
checkpoint
in
Qaraqosh.Courtesy of AINA News

IS abducts a Christian toddler

AINA also reports that a three-year-old Assyrian girl, Christina Khader Ebada, was abducted from her family as they were trying to leave Qaraqosh.

AINA said that the girl was taken from her family at a checkpoint. IS had escorted the family along with other residents from their homes to the checkpoint where they told them to leave and never return.

Her mother said Christina was hysterical as a heavily bearded man separated them and took her away.

The Ebadas are one of several Assyrian families who chose not to leave Qaraqosh when the Kurdish forces withdrew and IS took charge on August 7. Christina’s mother was later interviewed on the local Assyrian TV channel, Ishtar TV.

Prior to IS’ occupation Qaraqosh was the largest Christian city in Iraq , since August 7 more than 50,000 Christians have fled.

Other incidents in Qaraqosh

AINA reports today (1st Sept) that 75 year-old Najib and his wife Dalal, 72, were too old and ill to leave Qaraqosh when it fell to IS on August 7, but that at the end of August they were forced to leave by IS gunmen.

On August 19, IS militants detained dozens of Christians still living in its Hamdaniya district, according to

They made phone calls to their relatives on August 26, saying that they were detained in St. Paul’s House for church services, but communication had not resumed at the time of publication.

Iraqi family continually on the run from Islamist extremists

A mother, aged about 30, has told aid workers in Erbil that this is the third time her family has had to flee Islamic extremists in the past eight years.

They were first threatened by Islamists while living in Baghdad in 2006. They were warned ‘You are a Christian, if you stay, we will kill you.’ So they fled, but the group followed the family’s car and pushed it over the edge of a flyover. Two of her relatives died, and she barely survived the crash, suffering severe head injuries, and deep wounds in her neck and face. Her two boys had minor physical injuries, but one of them was so traumatised he could not speak or walk for three days.

After the incident, the family moved to Qaraqosh and lived at peace until June when they learned that fighters of the Islamic State (IS) were closing in on their town. They fled again, not wanting to risk another attack. After three days in Erbil, they returned because they were told it was safe.

Weeks later, on August 8, they were yet again on the run after news of IS rebels closing in on Qaraqosh. This time they had less than three hours before the rebels were due to arrive so they had to flee with only the clothes they were wearing.

The mother said “If we stay, this will happen over and over again. First we wanted to stay in Iraq, it’s our home, we love this land, but it’s too much. We can’t live like this anymore.”

Her mother-in-law added “God will wipe away all the tears and reward us for everything we have lost, we will be compensated in heaven. This will always be our hope and faith!” 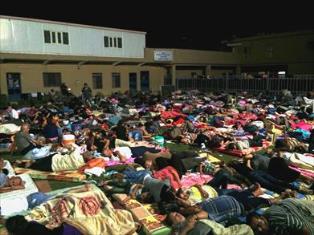 Displaced
Iraqis
sleeping
in the
courtyard
of a
church
in Erbil.
August 8, 2014
World Watch Monitor

All hope lost to ever return home

In another part of Iraq, IS members forced an Assyrian Christian woman and her elderly mother out of their home for the second time on August 20.

AINA, the women initially fled Mosul on July 19 but recently attempted to return after finding their camp for internally displaced people in Dohuk unbearable.

They returned home to Mosul on August 16 in hopes of getting some of the belongings they left behind with a Muslim neighbour, only to discover that this family had fled to Kirkuk after finding it impossible to live under IS.

The daughter said she was careful about keeping a low profile by only leaving home when fully veiled and to shop. However, only four days later, around 6pm, three IS members broke in and threatened them that they must convert to Islam, leave or be killed.

After refusing to convert they were taken to the IS Governor at a mosque in New Mosul where they were told to leave immediately – as he said “there is no place for infidels in the state of Nineveh.”

Since it was almost midnight the women begged to be allowed to stay until morning. Their request was granted but they were forbidden to go home as their house had already been seized by IS, and so had to sleep at a neighbour’s house.

Upon their return to the temporary camp in Dohuk, the daughter said she has no desire or hope of ever returning to Mosul.

Meanwhile on August 22, the Iraq Ministry of Justice announced that all real-estate sales in areas under IS control are null and void and will not be recognized.

The ministry issued the decree to ensure protected minorities, in particular Christians and Yezidis, will have their real estate protected against IS’ enforced transactions.

In an interview for Alsumaria News, Ministry spokesman Haidar al-Saadi said, “The Justice Minister Hassan al-Shammari has directed all real-estate departments to close real-estate records and not to transfer ownership of real-estate in areas that fall under the control of terrorist groups.”