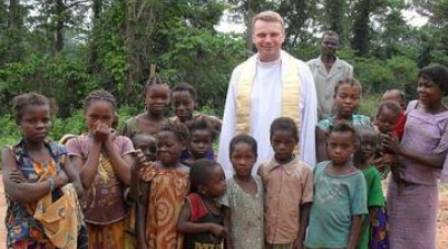 Fr Mateusz Dziedzic, has been living in CAR since 2009, where he runs nursery schools.Courtesy of Catholic Church in CAR

A Polish priest has been abducted by armed men in the Central African Republic, amidst rising tension which has claimed dozens of lives in recent days. Father Mateusz Dziedzic of the diocese of Tarnow, in Baboua, in the extreme west of the country close to Cameroon, was kidnapped on Oct 12 by eight members of a rebel group called the Democratic Front of the Central African People (FDPC).

”It was on Sunday evening, around 21.00, when a group of armed men broke into the parish compound and kidnapped Fr Dziedzic along with his assistant”, the Vicar General of the Diocese of Bouar, Fr Mirek Gucwa, told World Watch Monitor.

”From that moment, the kidnappers told them that they are hostages. But after negotiations, they took with them Fr Dziedzic, and left the other priest”.

Nothing has been damaged or stolen in the parish compound, he added.

The kidnappers demanded the release of their leader imprisoned in Cameroon, in exchange for Fr Dziedzic. The FDPC was initially allied with mainly Muslim Seleka rebels, but after its leader Abdoulaye Miskine fell out with the group, he fled to Cameroon, where he was arrested in Sept 2013.

Fr Gucwa has been regularly in touch with Fr Dziedzic, on the telephone, says he is in ”good health and well treated. But, after all, when you stay in the bush for a while, there are things that you are missing”.

Some medicines, drinking water and personal belongings were conveyed to Fr Dziedzic on Wednesday (September 15), through the kidnappers. The appointment to drop the package was kept – on the road between Baboua and Garoua Mboulaï.

Fr Mateusz Dziedzic, from southern Poland, has been living in CAR since 2009. Besides his pastoral responsibilities, he runs nursery schools among other social activities.

Fr Gucwa declined to comment on ”the current process”, aimed at releasing Fr Dziedzic, adding: ”the most important is that Fr Dziedzic is well treated”.

For Father Aurelio Gazzera, Bishop of Bozoum – who is currently in Bouar, the abduction of Fr Dziedzic does not come as a surprise.

”The rebels have kidnapped dozen of civilians, CAR and Cameroon Nationals, a few weeks ago but no one had moved. They thought perhaps that by kidnapping a European priest, they will attract more attention”.

Fr Gazzera, who has a wealth experience of mediation efforts with armed groups in CAR, feared that this affair may drag on a long time. But ”it depends on how the Cameroonian authorities will accede to the demand of the kidnappers”, he says.

On October 10, a group of ex-Seleka rebels attacked the St. Anne Parish in the northern town of Dekoa, 350 km from Bangui, killing 9 people. According to witnesses, the incident was triggered by an altercation in the market the day before, when several women, believed to be wives of ex-Seleka, were harassed by a mob. The market is located in the courtyard of the parish, which also hosts hundreds of displaced people. Once they found out, their husbands attacked the camp, killing 9 people. About 50 others were injured. French troops intervened and repulsed the attack, killing 6 attackers.

Three days later (on October 13), another priest was attacked as he was about to deliver a refueling to the Parish of Dekoua. Fr Aubert was stopped at a check point by anti-Balaka militiamen, 25 km from the capital Bangui, a Catholic source told World Watch Monitor. All the foods he brought in and a large sum of money were taken away.

In Bangui, a series of incidents targeting civilians, aid workers and peacekeepers have been reported since October 7. This outbreak of violence followed a grenade attack which claimed four lives, in the 4th District, say local sources contacted by World Watch Monitor. The attacker, believed to be a Seleka rebel militia man, was killed by an angry mob, prompting a reprisal attack by Seleka.

Despite the deployment of peacekeepers since Sept 15th, tension has escalated in Bangui and other parts of the country, prompting angry reaction from residents, exacerbated by ongoing violence.

”It appears clear now there is no will by the international community to bring peace in CAR”, remarks a church leader.

The recent violence caused displacement of many who had only recently returned home because they believed it was safe. Some 6,500 people were displaced by the latest outbreak of violence but that figure could be much higher, UNHCR reports.