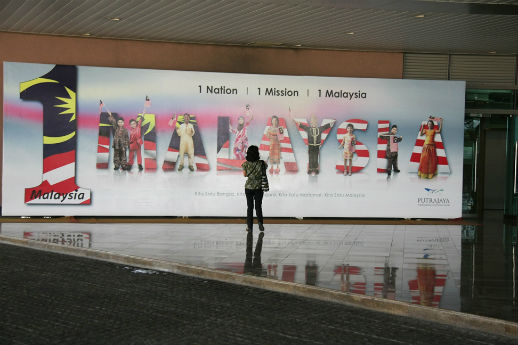 For Malaysian Christians, 2014 has been a year when they had to dig deep into their spiritual resources to withstand a sustained onslaught on their faith by Islamic authorities with the apparent collusion of state power.

There has been no let-up even in the week before Christmas. Malay Muslims were warned to beware the celebration of the birth of Christ because the festival is aimed at wooing them to the Christian faith.

The local branch of Hizbut Tharir, a global Islamic organisation that advocates the creation of an Islamic caliphate, issued the warning.

According to the news portal malaymailonline, the group, in its weekly newsletter issued at mosques on Dec. 19, claimed that “Christmas was a ploy to plant the seeds of religious pluralism into the minds of Muslims so Christianity can be considered as a religion equal to Islam”. The group also chastised Muslims who would wish their Christian friends a “Merry Christmas” as being “shameless”.

An Islamic non-governmental organisation ISMA, that propagates Malaysian Muslim solidarity, reiterated on Dec. 22 that it would be improper for Muslims to wish Christians a “Merry Christmas”.

The directives sit uncomfortably in a multi-racial and multi-religious country with a diversified and syncretic cultural heritage. Of the population of nearly 30 million, about 3 million is Christian and the Malaysian Constitution upholds freedom of worship.

After such messages, provocative outbursts against Christians subsequently posted on Facebook in turn prompted moderate Muslims to demonstrate support for the minority. Their sentiments were summed up by one direct response: “I’m a Muslim … may my Christian friends have a merrier Christmas.”

The official line, however, from the National Fatwa Council is that Muslims are barred from attending Christmas celebrations where Christian-associated symbols such as Christmas trees, Santa Claus-type attire and grottoes are displayed, or carols sung.

Members of the Malay supremacist group Perkasa on Dec. 19 ripped down a celebratory Christmas banner displayed outside the office of the opposition Democratic Action Party in the town of Ipoh, about 130 miles north of the capital Kuala Lumpur. The vandalism went unchallenged by police, but it was broadcast by the television arm of news portal Malaysiakini.

In a tumultuous year, one incident that particularly angered the Christian community and human rights groups was the decision by the Attorney-General not to prosecute Perkasa’s leader, Ibrahim Ali, for his threat in 2013to burn Bibles.

The Government’s senior law officer maintained that the reason not to prosecute Ali was because his threat “was not intended to cause religious disharmony, but was only to defend the sanctity of Islam”.

The biggest blow to Malaysian Christians in 2014 was the loss of an appeal in the Federal Court to revoke a government ban on the use of the word “Allah” by the Catholic newspaper the Herald. Malaysia’s highest court ruled that only Malay Muslims had a right to its usage, although the word precedes the birth of Islam.

The controversial ruling has led to two diverse interpretations: the protagonists in the case maintain that the verdict specifically applies to the Herald, while the Islamists insist that it applies across the country to all aspects of usage of Allah in Christian scripture and literature. The word, whose roots are in Hebrew, has been in use in the country for almost 100 years – long before Malaysia’s independence in 1957.

The church and the legal establishment say the ruling discriminates against Christians. The Sarawak-based Borneo Evangelical Mission made an impassioned plea to Prime Minister Najib Razak for the right to use Allah throughout the country since “religious freedom” is an inherent right under the Federal Constitution.

The year began with a raid by the Islamic authorities on the premises of the Bible Society of Malaysia in the state of Selangor, where they seized 330 bibles. These scriptures, for the use of indigenous races whose native tongue is Malay, use the word “Allah” to describe God.

As the year drew to a close, Christian joy at the news that the Bibles were returned wore off quickly when it was found they had been stamped with a message stating that the books were “strictly for non-Muslim usage only, and shall not be published or used in any part of the state of Selangor.”

In early December, police disrupted a church service in the town of Bangi, also in Selangor state. The worshippers were mainly people of Indonesian origin and the service was being conducted in Malay.

Later, hymn books containing the word Allah were seized from a priest in the southern state of Johore and the cleric detained under an Act of the Penal Code, which had been declared unconstitutional in 1988.

This police action was widely criticised by human rights groups in the country, who said Malaysia was fast-gaining unwelcome notoriety for its Bible-seizing activities.

Former Bar Council President Ambiga Sreenevasan called on the authorities to stop harassing Christians, to apologise to the priest, Cyril Mannayagam, and to return the 31 hymnals, titled “Praise be to God.” The books were returned a fortnight later.

In Penang, ruled by a party in opposition to the governing United Malays National Organisation, the Malay Chinese Chief Minister is being investigated for stating that “Allah” can be used by non-Muslims in the state. He is accused of “intending to insult and provoke a breach of the peace”. Christians and others pointed out that, in contrast, Perkasa leader Ali was let off for threatening to burn Bibles.

They point to arbitrary actions on the part of the authorities who openly appear to flout the law, and the constitutional right to freedom of worship, as disturbing and alarming in a country that had been known for multiracial harmony.

Militant Islamists also have begun to target moderate Muslim organisations, such as Sisters in Islam, which promotes the rights of women within the frameworks of Islam and universal human rights, as being too liberal. Increasingly, Muslims who question extremists are denigrated and, in some cases, dragged through the courts.

A senior Christian bishop, who asked not to be identified, said the global resurgence of Islam is having a detrimental effect in Malaysia. Zealots, he said, seek to be “pure and conservative” and want to impose Sharia and harsh “hudud” laws that prescribe mutilating limbs or death by stoning for theft and robbery.

The government of Najib Razak, the bishop said, is pandering to the Islamists because the political support for the United Malays National Organisation is in the predominantly Malay rural heartland. Within the party, he said, the prime minister is facing increasingly conservative opposition. In the past month he was forced to abandon his promise to repeal the colonial-era Sedition Act, under which his critics, including prominent Malay academics, have been charged.

“In this scenario of a weak Government, the radicals are trying to push their way around,” the bishop said.

He said the global church has yet to engage in radical re-thinking to respond to the rise of political Islam championed by groups such as the self-proclaimed “Islamic State” proclaiming a caliphate in parts of Iraq and Syria, and which has attracted Malaysian Muslim jihadis. “We don’t have a strategy,” the bishop said, quoting the words used by U.S. President Barack Obama to describe America’s approach in dealing with IS.

The rising Islamic extremism in Malaysia prompted a group of 25 eminent moderate Muslims to publish an open letter to the Prime Minister urging him to “champion open and coherent debate and discourse on the administration of Islamic laws in this country to ensure that justice is done.”