An argument between a taxi driver and his customer has led to the death of at least 16 Christians in Bangui, the capital of the Central African Republic (CAR).

A man known as Aladji hailed a motorcycle taxi and asked to be taken to KM5 (Kilometer 5), a Muslim-dominated district of Bangui. He was carrying a bag of grenades. When the motorcycle broke down, the driver stopped to fix it, but his agitated passenger pulled out a knife and tried to stab him. The driver overpowered Aladji and stabbed him to death; the body was later discovered at the Ali Abolo mosque in KM5.

After Aladji’s body was found, Muslims marched to the Christian sector of the city where they killed at least 16 – some were decapitated. Others were injured.

Authorities arrested 10 members of Seleka – the almost entirely Muslim rebel group – following the killings. Legal action against them has already started, despite reports in L’Hirondelle – the local newspaper – that members of Seleka tried to free them.

On Tuesday, February 17, members of Seleka drove to the centre of Bangui, where bystanders recognised one of their commanders and the driver of another Seleka general. The bystanders immediately started shouting and throwing rocks at their car and, during the fracas, they discovered the vehicle was carrying weapons. Security forces intervened to protect the two men from being lynched. 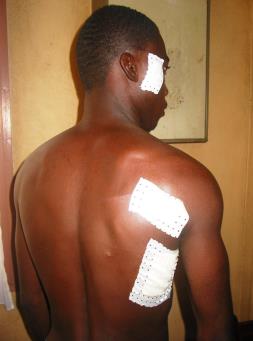 According to L’Hirondelle, the drive-by was a distraction by the Seleka, set up to create an opportunity to rescue the 10 men accused of killing the Christians in KM5. Another local paper, l’Agora, said the accused were to be rescued while they were being transferred into detention.

Two days earlier, on February 15, Father Narcisse Olimbi, and three passengers he was carrying lost mobile phones and money when his car was hijacked by an armed group.

The Archbishop of Bangui strongly condemned this latest act of violence: “We have recently observed that armed groups are targetting God’s servants.”

“I would say that those who are committing these acts have missed their targets. They are thinking that these people are just priests or aid workers, and they can easily take their vehicle [but they] are penalizing [their own] people,” he added.

Destruction in the north

Meanwhile, in the northern CAR province of Nana Grebizi heavily armed Muslim Fulani herdsmen attacked several villages and central parts of the provincial capital Kaga-Bandoro on February 15. During the attack they killed two Christians, tortured another and destroyed property belonging to Christians.

The Fulani herdsmen brought in cattle that they allowed to graze on farmland belonging to Christians. Soon after arriving they started fires and looted the local population. The blaze destroyed swathes of farmland, at least eight churches, several other mission centres and an unknown number of Christian homes.

The two men who died were Pastor Arouneka David and Sanze Gervais. Sources also reported that the attackers tortured Pastor Yanike Pierre. One man who was abducted was later released. but there has been no news of Kaga Bandoro’s neighbourhood chief, Kondremunji Philippe and his son, both kidnapped.

After Seleka commanders resisted efforts by UN peacekeepers to remove them from their administrative offices, Christians in Kaga-Bandoro fled into the bush fearing further clashes.

Local sources report that 2,000 people are taking refuge at the local Catholic church and other refugee sites. There are concerns that many of those fleeing from the local tension face hunger, lack of clothing and insufficient shelter.

“Many have lost everything they had”

“We want to carry on our daily activities without any problem, in peace,” said Enza Vincent, a local evangelical pastor. “But unfortunately, we are suffering here. People don’t have food, there is malnutrition everywhere; many of them have lost everything they had, their houses have been burnt. No help is coming.”

CAR has been in crisis since late 2012 when Seleka rebels seized power in a campaign characterized by the widespread killing of civilians, burning and looting of homes, and other serious crimes in which Christians were specifically targeted. In mid-2013, a movement called ‘anti-Balaka’ emerged as a means of self-protection, but they soon began committing large-scale reprisal attacks against Muslim civilians and others.

Seleka are associated with Muslims, and anti-Balaka with non-Muslims, of which the majority are Christians, bringing an apparently religious dimension to their conflict. Although it is all about politics and access to resources (minerals, wood, state funds) the religious identity of the main movements has played a prominent part. Anti-Balaka continue to dominate the South and West, while Seleka, with the Fulani and others, dominate the North and East.

Tensions between the two have been exacerbated by the power vacuum outside the capital, as a result of insufficient deployment of UN peacekeeping troops, and the incapacity of the interim government to restore order. Battles between the two movements have been holding local populations hostage.

Preliminary consultations for the national Forum of Reconciliation, scheduled by the July 2014 ceasefire agreement have, however, started. But some delegations have met fierce resistance from armed groups in the North and East regions of the country, particularly in Bambari and Kaga Bandoro.