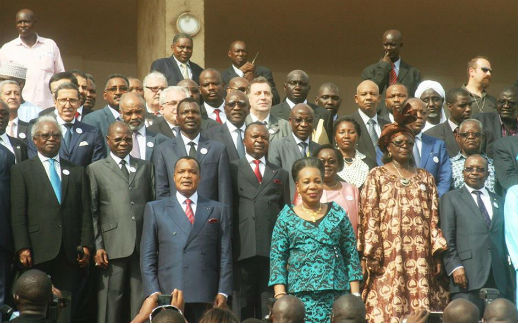 A week-long attempt to reconcile warring elements in the Central African Republic is underway in Bangui, the capital.

About 600 delegates — representing armed groups, political parties, government, and civil society — are grappling with the causes of the 2 ½-year cycle of deadly, often sectarian, violence, as well as with possible solutions and plans for the future of the country.

One early result: An agreement by the armed groups to release between 6,000 and 10,000 child soldiers and to stop underage recruitment, UNICEF said May 5 in Geneva.

Delegates to the forum include representatives of Christian and Muslim groups, and for Anatole Banga, a pastor and vice-president of the Evangelical Alliance in Central Africa, the forum looks like a last-chance meeting.

”Today, everyone wants peace,” he said. “There is a real will to turn the page of the past and enable the country to start again on new basis. ”

Landlocked and largely impoverished, the French-speaking Central African Republic has a long history of unstable, military governments since it gained independence in 1960. The most recent crisis began in early 2013 with a Muslim rebel uprising, which precipitated a backlash that has been deadly to Muslims. A July 2014 cease-fire pact has been frequently violated.

”Since the beginning of the crisis, the Church has spared no efforts to ensure that the crisis does not degenerate into a sectarian conflict. This forum offers us the opportunity to reiterate our commitment to peace and reconciliation in CAR,” Banga said.

More: Religious groups have played a key role in favor of peace and reconciliation in CAR 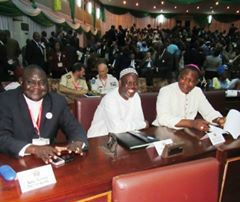 The Evangelical Alliance held a preparatory workshop to develop proposals, which will be presented by its delegates.

Preliminary consultations for the Forum had allowed people of all social and professional groups to voice their concerns and suggest solutions to end violence.

That’s what distinguishes it from previous forums, at which participants were not always representative of the people, Banga said.

”The church, jointly with civil society, has worked to ensure that the forum will not be monopolized by politicians. We want to the Central Africans to voice their concerns, so that this forum can be primarily a social gathering, not political,” he said.

”We all hope that, thanks to these preparatory efforts, the forum will lead to constructive and lasting results.”

Speeches dominated the May 4 schedule, and May 5 was given over mostly to procedural matters. A Rwandan delegation, including survivors of the 1994 genocide, shared the experience of their country’s reconciliation.

The ongoing violence has left an estimated 2.7 million people in need of aid — nearly 900,000 of whom have been forcibly displaced since the outbreak of violence, the U.N. High Commissioner for Refugees said in an April 27 press release.

“We must prevent the Central African republic from becoming a forgotten crisis,” said Claire Bourgeois, the UN’s Humanitarian Coordinator in CAR, in the release. “The current funding for the strategic humanitarian response does not allow us to ensure the protection of all these displaced persons or to provide the minimum of what is needed to meet the huge humanitarian needs.”

Meanwhile, the French military has been conducting an inquiry following the allegations of child sex abuse, involving French troops, between December 2013 and June 2014. The allegations emerged after a UN report leaked to a British newspaper.

Entitled “Sexual Abuse on Children by International Armed Forces” and stamped “confidential” on every page, the report details the rape and sodomy of starving, homeless young boys by French peacekeeping troops at a centre for internally displaced people at M’Poko airport in Bangui.