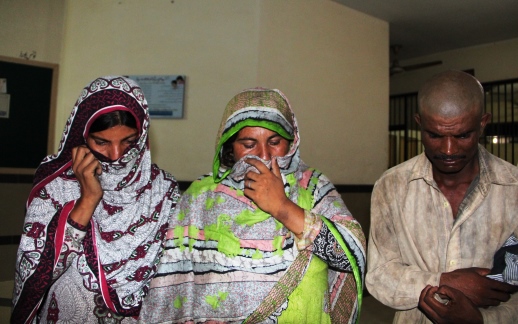 Rukhsana and other
family members were beaten and had their faces blackened by an angry mob, June 2015World Watch Monitor

A Christian father of four was beaten, had his head shaved, his face blackened, and was dragged through his Pakistan village before he was rescued by police June 30.

Awais Qamar’s wife, Rukhsana, and two other family members also were beaten and had their faces blackened with soot by a mob angered by the fact that the family had been using a salvaged advertising banner as a mat to cover their floor. The banner, containing the emblems of various colleges, also included a short verse from the Qur’an: “My Lord, increase me in knowledge.”

Qamar, 35, who also is known by the name Gharibu, which means “a poor man” in the local language, was boring for a new tube well about two kilometers away from his village Maki 460 in Farooqabad, about 50 miles northwest of Lahore. It was about 9:30 a.m., and a man in the local mosque had announced from its loudspeaker that Qamar had desecrated the Qur’an. Qamar was summoned to the village for “committing blasphemy.”

A crowd already had begun to converge in the village. A Christian neighbor of Qamar, Nazir Masih, tried to intervene.

“As soon as I had come to know about this issue I rushed to meet the people and assured them that Christians would teach Gharibu a lesson, but they should not take law and order into their own hands,” Masih told World Watch Monitor.

“The mistake was too big but the villagers should forgive it and start living peacefully again, as Gharibu was an absolute illiterate,” Masih said. “But they said that the sin was too grave and was unpardonable and the only remedy for desecrating the Qur’an is death.”

“I even offered them that Gharibu could be banished from the village, but they urged to kill him.” 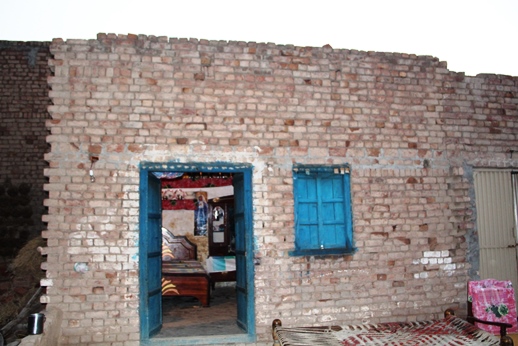 One-room house
where Gharibu and his family livedWorld Watch Monitor

Masih said two instigators of the violence — brothers Muhammad Riaz, 23, and Muhammad Niaz, 30 — shaved Qamar’s head and blackened his face, and blackened the faces of his wife, their daughter Farzana, and of Qamar’s sister-in-law, Rehana.

“Men were beating Gharibu while women were beating his wife, Rukhsana, and then the mob made a garland of shoes and put it in Gharibu’s neck and dragged him in the streets while beating him,” Masih said.

Even before the police arrived, they urged some of influential Muslims from a nearby village to intervene. One of those who stepped in, a man who asked not to be named, told World Watch Monitor that he employed both Qamar’s father, Siraj Masih, and brother, Ashraf.

“I had to intervene after I heard Ashraf’s wife, Rehana, was also being beaten up,” the man said. “Also, a police officer informed me that there was no issue of blasphemy and only illiterate villagers were making something out of nothing. I took Ashraf with me and reached where the crowd was beating and humiliating them. I told them that they immediately stop torturing them or else they should be ready to face consequences as the police were also on their way.”

Additional Superintendent of Police, Muhammad Jawad Tariq, said he was near Maki 460 village when he was alerted to respond to the violence. He arrived with another officer.

“The mob didn’t resist much and handed over these fellows to us,” Tariq told World Watch Monitor. “We just bundled them in police vans and sped from there.”

Qamar, his wife and the other vicitms were evacuated to a safe place, said District Police Officer Sohail Zafar Chattha. 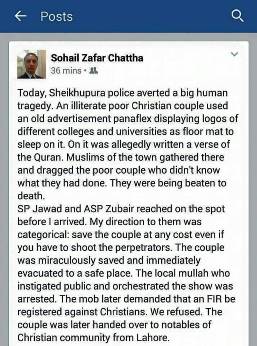 Chattha, who maintains a popular Facebook profile, posted a message to the social-media site saying that police who got to the scene before him “averted a big human tragedy.”

“My direction to them was categorical: save the couple at any cost even if you have to shoot the perpetrators,” he wrote on his Facebook post. He said police arrested a mullah who had incited the violence. His name has not been released.

The mob, however, still was demanding action against Qamar and his family. “Some of them were even raising slogans to throw out all Christians from the village and set their houses on fire,” Masih said. “Others were saying to socially boycott all the Christians and never hire them for labor.”

Chattha said police refused to file a report against the family. He said almost half of the police force of the district was deployed to bring the situation under control.

“The police will remain deployed in front of the church for some time,” he told World Watch Monitor. “If there will be a need, a permanent checkpost can be set up to keep peaceful environment. However, I have advised for Gharibu and his family not to return to the place as it could be jeopardizing their lives.”

Trouble between Qamar’s family and the two brothers whom Masih said had whipped up the mob stretches back earlier than the June 30 violence.

The brothers, who are barbers, earlier this summer placed a stall outside their shop – and in front of Qamar’s house — and sold ice from it, Masih said. Others would gather at the stall in the evenings and peer into the house and hurl abusive language. Rukhsana complained to the brothers’ mother, to little effect.

Meanwhile, Rukhsana had brought a used roll-up banner from Faisalabad where her parents lived, Masih said. On June 30, a visiting friend told her the banner carried a verse of the Qur’an. Rukhsana offered to sell the banner, and the friend went home to obtain the money. When she came back, she was accompanied by a man who slapped Rukhsana and took the banner, Masih said.

Chattha said police refused to file a First Information Report against the family partly because the state inspector general had given police orders to investigate blasphemy allegations personally before determining whether to file a report.

“We will still not let the people go off scot free who triggered this tragedy in the first place and those who blackened the victims’ face and beat them,” he told World Watch Monitor.

Rabia Ghani, project manager for the Pattan Development Organization, which works with members of Pakistan’s parliament on human-rights issues, applauded the police’s quick rescue of the victims and refusal to lodge a report against them.

“It’s the need of time to push governments to have standard operating procedures for such cases and SOPs on how police should deal with cases of religious minorities,” Ghani wrote in an email. “The police should identify specific actions and behaviors to not just ensure non-discrimination, but strict action, transparency, and equipped with knowledge of an adequate, sensitive and proper response.”