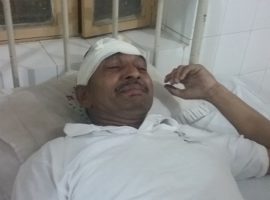 A Seventh-day Adventist church leader and his family were attacked over a dispute about the ownership of their property. Pictured is the church leader’s father, Robert Hussain, in hospital.World Watch Monitor   A Pakistani church leader has described how his family were hospitalised by a mob of more than 50 . . . Read More
July 19, 2016 Pakistan Farooqabad, Imran Khan, Pakistan, Pakistan Muslim League, PTI, Sheikhupura, Women 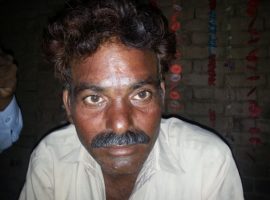 The father of a 16-year-old girl allegedly raped by her neighbour believes she has little hope of justice because the accused is well-connected politically in the local area. Nasar Masih believes the police will ultimately favour the suspect, who he believes was able to rape his daughter in expectation of . . . Read More
July 3, 2015 Pakistan Blasphemy, Faisalabad, Farooqabad, Lahore, Quran, Seventh-day Adventists
Rukhsana and other family members were beaten and had their faces blackened by an angry mob, June 2015World Watch Monitor   A Christian father of four was beaten, had his head shaved, his face blackened, and was dragged through his Pakistan village before he was rescued by police June 30. . . . Read More
May 22, 2012 Pakistan Blasphemy, Farooqabad, Pakistan, Punjab, Quran, Sheikhupura

Police in Pakistan have charged a young Christian man with “blasphemy” after he had an argument with Muslims over a billiards game in Punjab Province’s Sheikhupura district, his cousin said. Farooqabad Police arrested Sajid Inayat, 20, on Friday (May 18) and charged him with desecrating the Quran under the country’s . . . Read More