This little girl and her family were forced out of their home in Iraq by the Islamic State.Courtesy Open Doors International

States must pay more attention to violations of the rights of children and their parents, particularly minorities and converts, according to the latest report from the United Nations’ Special Rapporteur on Freedom of Religion or Belief.

In the report, which was presented to the UN General Assembly in New York on 22 October, Heiner Bielefeldt says that every child must be respected as a “rights holder.”

The report says that there is a “need to address urgently the situations of violence and discrimination that affect many individuals, particularly women and children, on the basis or in the name of religion or belief.”

It says parents have the right to “direct” their child in religious choices, rather than providing them with a “neutral” education, adding that more freedom of choice should be given in accordance with the “evolving capabilities” and “maturity” of the child.

“States are obliged to … facilitate the development of the appropriate infrastructure needed for religious communities, especially minority communities, to be able to pass on the tenets of their faith to the next generation.”

As regards conversions, the report criticises states that fail to recognise the validity of religious conversions or which prefer one religion over another.

“Cases of religious conversion of one parent have led to him or her being deprived of custody rights, often against the explicit will of the parents and the child and sometimes as a consequence of forced divorce being required by the State in the wake of one of the parent’s conversion,” states the report. 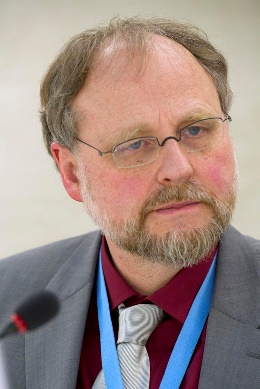 “In States that privilege a certain religion as the official State religion, parents converting away from that hegemonic religion run the risk of being alienated or even separated from their children … Official documents issued for children do not always reflect the new religious orientation of parents after conversion, thus leading different religions being ascribed to the parents and the children, often against the explicit will of both.”

“In some legal systems people from certain religious or belief backgrounds are even prevented from entering a legally recognized marriage, which might result in children being treated as ‘illegal’,” the report adds.

The report also highlights the vulnerable position of children in schools, where they can be exposed to involuntary religious instructions or even indoctrination.

Iraq’s President, Fuad Masum, recently expressed sympathy with non-Muslims in their opposition to a law which states that minors must follow the religion of a parent who adopts Islam.

Four Christian members of the Iraqi parliament called for a change in the law, calling it “unjust” to non-Muslims, as World Watch Monitor reported last month, but their proposal was defeated by 137 votes to 51.

As the civil law stands, non-Muslim children under the age of 18 become Muslim when either parent converts. The MPs proposed that the child’s religion remained the same until the age of 18, when he or she could choose to change religion if desired. The MPs stressed that the current law contradicts the Quranic principle of “no compulsion in Islam”, as well as Article 41 in the 2005 Iraqi constitution, which states that Iraqi citizens are “free in their personal, religious and doctrinal choices”.

Their proposal stated that the current legal wording is causing “considerable suffering” for Christians and other minority faiths. It gave the example of children coming from Christian backgrounds who have grown up learning Christian traditions and religious customs, some even working for the church, teaching in orphanages or joining monasteries. Changing the religion of Christian minors without their consent exposes them and their families to great personal and social stress, it said. The current law also causes problems when Christian minors who have become adults want to marry but discover that, without their knowledge, they are Muslim by law, so cannot marry a Christian without great social and legal complications.

On 4 November, minority religious groups including Christians staged a protest in front of the United Nations building in Erbil, holding slogans denouncing Article 26 of the national ID card law.

They submitted a memorandum, which stated: “Once again the concepts of democracy in Iraq are violated by the Iraqi Council of Representatives, which has recently approved the draft National Card Law’s paragraph II of Article 26, which [decrees] attaching non-Muslim minor children to the parent who embraces Islam.

“We strongly deplore and condemn the unjust Iraqi Council of Representatives decision, because this paragraph is a gross violation of the principles of democracy, co-existence, citizenship and equality in a country that claims to pursue democracy.”

Youssef Yaacoub, president of the National Union of Beth Nahrin, added: “We respect the Islamic law and respect its application on Muslims, who accept it willingly, but this should not be applied to non-Muslims.”