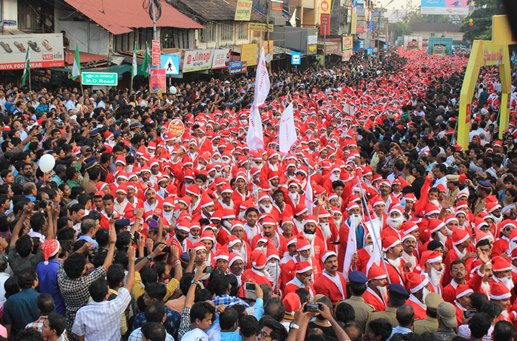 Thousands of Santa Clauses parade through the streets of Thrissur, Kerala state, in 2014.World Watch Monitor

Church leaders have joined critics of a controversial move by the government of India’s second-most populous state to hold “Good Governance Day” observances on Christmas Day.

“Holding programmes to promote Good Governance is good, but such a celebration should be avoided on Christmas Day. It is an unwanted distraction,” Cardinal Oswald Gracias, Archbishop of Mumbai and president of the FABC Federation of Asian Bishops Conferences, told World Watch Monitor.

Gracias, an adviser to Pope Francis, was responding to the move by Maharashtra state in western India, governed by the Hindu-nationalist Bharatiya Janata Party (BJP).

“There might be a strategy behind it,” Gracias said, when asked if he felt Good Governance Day was an attempt to undermine the Christian celebration in a nation where Christians account for 2.3 percent of India’s 1.26 billion people, four-fifths of whom are Hindu.

Christmas Day is already a public holiday in India. The Maharashtra government nonetheless announced on 4 Dec. its decision to hold good-governance observances on 25 Dec., which is also the birthday of former BJP leader Atal Bihari Vajpayee, India’s prime minister from 1998 to 2004.

In India, all holidays – both national and state level – are declared in advance, and both Christmas and Good Friday are included on the list. Since Sundays are holidays, Easter is not recognised as a separate holiday.

While the Maharashtra government declared that the official Christmas holiday has not been cancelled, the state asked its employees “to voluntarily conduct training programmes on the day on right to information, right to service, stress management, and ideas to run the government.”

Critics promptly derided the decision as similar to a move last year by the federal government – also led by the BJP – which prompted a national outcry and stalled Parliament.

“How can one celebrate Good Governance Day when the government is non-functional? We are not against celebrating the former PM’s birthday,” Sachin Sawant, spokesperson for the opposition Congress Party, told The Asian Age daily. 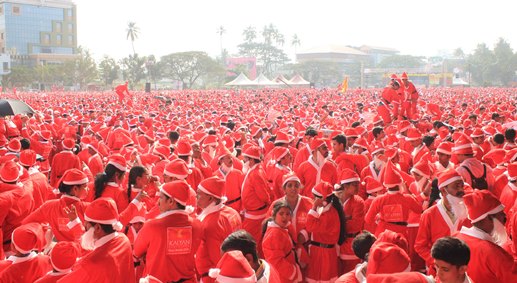 Nawab Malik of the Nationalist Congress Party also criticised the move. “Christmas is a religious festival and has been celebrated for over 2,000 years. How can the government celebrate the former PM’s birthday on the same day? This is hurting religious sentiments of the people,” he told World Watch Monitor.

“There is definitely a deliberate attempt to undermine the importance of Christmas,” Rev. Roger Gaikwad, general secretary of the National Council of Churches in India, told World Watch Monitor. “The move cannot be seen in isolation from what is happening in the country. The BJP government has been keen on suppressing the minorities, their culture and icons at different levels.”

The government in a secular nation such as India “should be sensitive, especially to religious minorities,” said Catholic Bishop Thomas Dabre of Pune – 150 kilometres south-east of Mumbai. The government’s message seems to be, he said, to let Christians celebrate Christmas while Hindus go to work.

“We want the Hindus also to be free to celebrate and share the Christmas joy with us,” the bishop said.

Dolphy D’Souza, an outspoken Christian activist in Mumbai, described the move as “unfortunate” and showing a complete “lack of sensitivity toward minorities”. It “raises suspicion about the government’s intentions,” said D’Souza, head of a movement called Police Reform Watch.

In smaller ways, Christians say Christmas is being snubbed even in the Christian heartland of southern Kerala state. The National Service Scheme camp for high-school students was scheduled in such a way to keep Christians students and teachers involved in the camp even on Christmas day, said Rev. George Paramel, education secretary of the Catholic diocese of Irinjalakkuda, in a statement. Enrolled students get special grades for their participation in NSS programs, controlled by the federal government.

“Since the NSS camp is scheduled from December 19th to 25th, the students can return home only on the Christmas afternoon. So, I wrote to the NSS coordinator and to Kerala chief minister to prepone the camp so that the students can return on the Christmas Eve,” Catholic school headmaster P.K. Antu told World Watch Monitor. But he noted that the NSS official said he was not authorised to change the dates of the camp.