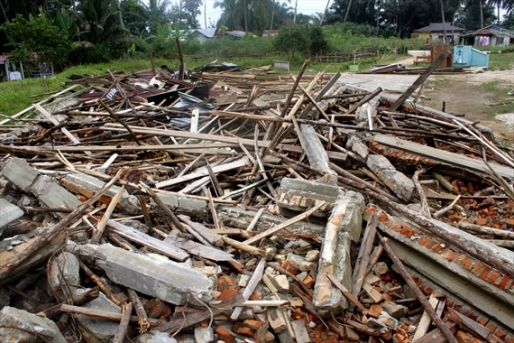 Ten churches were destroyed in Aceh in the month of October alone.World Watch Monitor

President Joko “Jokowi” Widodo on 23rd Dec promised a safe Christmas celebration throughout Indonesia. It’s the world’s most populous Muslim nation, but only one of its provinces applies sharia.

Ten churches were destroyed in this province – Aceh, in the Singkil regency – in the month of October alone, out of more than 30 churches nationally which were torched, destroyed, or forced to shut down in 2015.

In all, 11 churches were demolished in Singkil, most following a settlement between Aceh Singkil’s religious leaders under the local government’s consent, after clashes between Muslims and Christians led to a focus on the existence of still-unregistered churches. However, many churches say they have tried to register for years and faced numerous obstacles.

In the immediate run-up to Christmas, the Aceh Singkil Regency Chief, or Bupati, banned Christmas services on 25th – affecting more than 2,000 Christians from the destroyed churches. They were only allowed and promised security by the authorities (Bupati, police and military) if they held services on the 23rd Dec.

The recently-established Aceh Singkil Churches’ Communication Forum (Forsicas) met on 23rd Dec. and decided to hold services on the 25th at all the sites where their demolished churches used to stand. This was in direct defiance of the authority’s directives to either have the Christmas services on the 23rd or hold them on 25th outside Singkil’s border.

Since October, the majority of the Singkil congregants have been unable to share in corporate worship. Around 1,000 churchless believers were prohibited from raising temporary tents to hold Sunday worship services – for “security reasons” – and advised to go to churches in other villages.

In Aceh, church leaders must obtain permission from the local government if they want to hold Sunday services in tents. One of the torched churches, the Indonesian Christian Church (HKI), has recently been given a permit to do so.

Aceh Singkil’s authorities also emphasised that 13 remaining churches (those not on the authorities’ list for “closure” as a result of the inter-communal violence) were given permission to apply for a registration permit, and that they must do so in the next six months. Church leaders from those churches must now gather at least 150 identity cards from church members and another 120 from local Muslims.

The government also promised a worship centre for those whose churches have been destroyed, but many Christians are sceptical.

“Our leaders have applied for permits since our church was sealed in 2012, but the government hasn’t released the permits yet,” said a member of the Indonesian Christian Church, referring to a similar situation in May 2012, when 20 churches in Aceh were closed for the same reason. 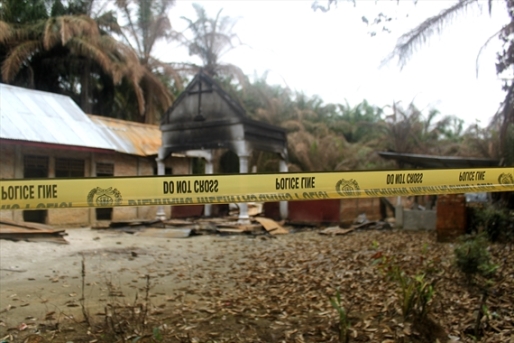 Three Christians have been arrested on suspicion of involvement in the Aceh Singkil interfaith clash on 13 Oct., when a Muslim man was shot dead – which sparked the church closures.

One of the suspects, who can only be identified using his initials, NT, from Dangguran village, was “randomly arrested” by the police just three days after the religious violence, according to a local source. Fearing more arrests, other men fled the village. “Now only women and children are left, living in fear and in need of food,” he said.

“The identification and arrest of suspected shooters in a very short time seemed dubious and served only to calm down the victim’s family and public tension created by the media,” said a staff member for Open Doors International, a charity which supports Christians in difficult situations.

As if responding to the public unrest, M. Ridwan was appointed on 21 Oct. as Aceh Singkil’s Police Chief to replace Budi Samekto, who had failed to anticipate the church attacks and arson on 13 Oct.

On 26 Oct., the Minister of Religious Affairs, Lukman Hakim Saifuddin, visited Muslim and Christian leaders in Aceh Singkil. In his short speech, he warned against vigilantes taking matters into their own hands and said that church demolition was not about religious intolerance, but the result of them not following regulations.

However, all of the churches demolished in Aceh Singkil had been built long before the Joint Ministerial Decree of Religious and Domestic Affairs was introduced in 2006, requiring religious buildings to obtain permits before being built.

The National Commissions of Human Rights stated in 2013 that over 80 per cent of worship houses in Indonesia are without a license, including mosques.

After a recent church closure in the capital city, Jakarta, Governor Basuki Tjahaya Purnama advised the government to alter its approach.

“Instead of banning people from worshipping, churches and mosques built before the decree should be assisted to obtain the license,” said Purnama, a Christian. 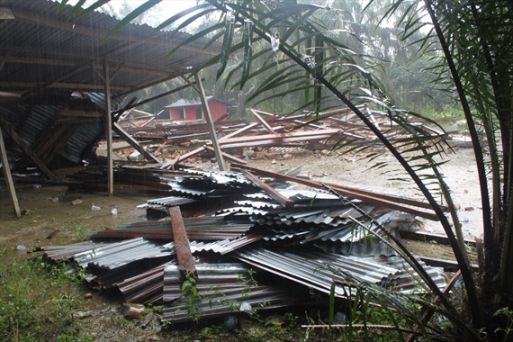 As in the aftermath of a religious riot in Papua in July of this year, Aceh Singkil’s violence stirred up a string of attacks on churches in other parts of the region and country.

The Protestant Church in West Indonesia (GPIB) in the Sabang regency suffered an arson attempt only three days after the riot.

On 22 Oct., the Batak Christian Protestant Church (HKBP) Keroncong Permai in Tangerang, West Java, was closed by the government for not possessing a license. For the same reason, a letter was sent to HKBP Syalom in Jambi province, ordering the destruction of the church. The congregation was given two weeks to carry out the demolition, before the government would take over.

A general sentiment of despair and disbelief looms over the Singkil villagers in Aceh. One of the Christians whose church was demolished on 19 Oct. said: “The church had been here for such a long time. Our government should have paid attention to churches with large congregations. Where will we go for services now?”

“I have lost my hope for a better Indonesia,” said a Muslim woman, who converted to Islam from Christianity after she married a Muslim, and wished to remain anonymous. “They who call themselves government and religious organisations have destroyed one beautiful thing: the garuda,” she said referring to the country’s symbol of harmony in diversity in the form of a mythical bird called “garuda”.

She said Christians and Muslims had lived in harmony for decades and respected each other’s faiths before the incident.

“But now, everything’s different,” she said. “Muslim neighbours wouldn’t pass by the church debris or even glance at their Christian neighbours. I don’t know if our relationship could ever go back to the way it used to be.” 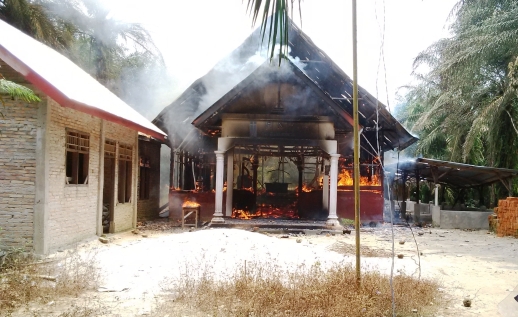 The first incident took place on 18 Aug. with the torching of the GKPPD Mandumpang by an unknown person (the third time this church had been torched in three decades).

A mob of Muslim radicals then torched HKI on 13 Oct., sparking religious violence that left a Muslim man dead and an estimated 8,000 Christians displaced. From 19-23 Oct., nine other churches were demolished.

Apart from these 10 unlicensed churches previously listed for closure, Muslim extremists demanded that two other churches, which were known for their big congregations, be demolished by 23 Oct. “Or else, the radicals will deploy around 7,000 people [to attack],” a local church activist claimed. The government gave in to the demand.

According to the agreement, the demolition would be done by the churches themselves. But in reality, Christians could not bring themselves to destroy their own churches, so officials took over. Church members wept as they watched civil police officers bringing down their worship houses.

“This [church demolition] is the best solution for all of us. I hope there won’t be another in the future,” said Aceh Singkil’s Regency Head, Safriadi Manik.

Indonesia ranks #47 on Open Doors International’s 2015 World Watch List, which ranks the 50 countries where it is most difficult to live as a Christian. Officially it is a secular country, despite hosting the world’s largest Muslim community. Aceh is the only province given special privileges to enforce sharia and as a result has become one of the toughest places for Indonesian Christians to live and exercise their faith.

“The topic of religion is basically dealt with on a regional level, constitutional guarantees like freedom of religion are not implemented … The government’s inaction creates fear,” said an analyst at Open Doors International. “That the local government has put an additional 13 churches in Aceh Singkil on a watch list shows that in 2016 more difficult news should be expected. But Christians do not only face trouble in this region. Coincidentally, around the same time, a church had to celebrate the noteworthy and sad hundredth anniversary of a worship service outside the presidential palace in September. The GKI Yasmin church in Bogor, 60 kilometres outside Jakarta, had applied for registration for their church and was denied by the administration. In the end, the Indonesian Supreme Court ruled that the church had kept all legal demands and consequently had to be allowed to worship in their building, which had been sealed off by authorities. But the mayor of Bogor and his successor are refusing to implement the court`s ruling. This shows that the Christians need more help than just rhetorical support.”