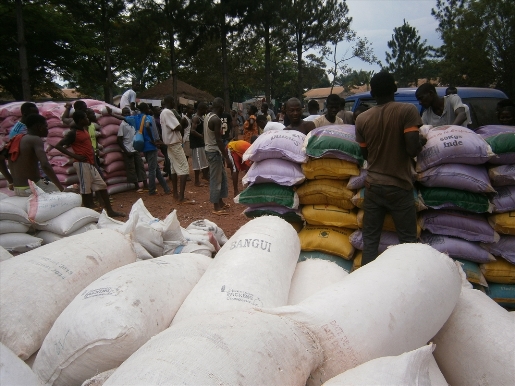 The Central African Republic is suffering from a continuing humanitarian emergency, and a now-serious threat of famine.Courtesy Open Doors International

Today’s inauguration (30 March) of a new President in the Central African Republic (CAR) brings hope for a new beginning, and a brighter future for the war-torn country.

After three years of political crisis, Faustin Touadéra beat Anicet Dologuélé in elections on 14 February, securing about 63% of the votes.

But the new government faces many challenges, such as reconciliation of the nation, helping it to recover from its continuing humanitarian emergency, and a now-serious threat of famine. The World Food Programme (WFP) reports that at least half the population (2.5 million people) is now facing hunger. Indeed, it says the number of people battling hunger has doubled from 2015, as CAR’s overall crop production in 2015 remained 54% below the pre-crisis average.

WFP says unless there is serious intervention, the crisis will deteriorate, but that it has secured only about half the money it needs until the end of July.

Helene Fisher, the ‘Women to Women’ programme leader of Open Doors International, which partners with churches in CAR, who has just returned from the country, confirmed the hunger crisis:

“It’s heart-breaking. Many of the dozens of women I talked with are single mothers; their husbands were killed or have left. Now they’re preoccupied with feeding their children. They told me how they’d had small animal holdings before the crisis, or had bought and sold enough basic commercial items to feed their families well. But now they’ve not been able to replace the ‘capital’ they had, after it was destroyed. And subsistence living on a poor diet of cassava is taking its toll on their children’s health and development”.

Touadéra, a well-known scholar and a Christian, had served as Prime Minister in the pre-crisis administration of President Francois Bozizé. His election brought an end to the administration of interim President Catherine Samba-Panza, which was plagued by allegations of incompetency and corruption.

The election of the new President has instilled some hope, reflected by Bishop of Bangassou Juan José Aguirre Muños: “At last we have a new president. Beyond the person who holds the office, what is important is that we have a new President who we hope will lead the country out of the abyss into which we sank three years ago.”

But it will not be easy. Touadéra stands at the helm of a country left in tatters after three years of brutal violence.

One of the biggest challenges the government faces is reconciling the communities polarised along religious lines through the crisis. Touadéra acknowledges that. He told the BBC: “The elections were important but they are not the only step out of this crisis. We have to create the conditions for dialogue between the two communities. We will do everything we can so that Central Africans can live together in Central African Republic.”

Although UN and French forces have made a lot of progress in restoring peace in CAR, tensions remain, particularly in the north and east. And even in the capital, fresh cycles of violence last September and October resulted in at least 130 deaths, with an estimated 430 people injured. The episode, which triggered the displacement of at least 30,000 people, contributed to the repeated postponement of legislative and presidential elections.

The Church has a role to play

Churches played an active role in preparations for the elections. “Both Protestant and Catholic Bishops organised conferences to help church leaders prepare their congregation for the elections,” noted an Open Doors researcher. “They were encouraged to turn out to vote in great numbers, to shun violence or anything that could jeopardise the process, and to vote according to God’s standards and not ethnic affiliation. Church leaders duplicated these seminars in churches. There were also media campaigns by Christians and NGOs that helped the process.”

Additionally, churches continue to play a role in relieving the pressures caused by the humanitarian crisis. Shortly before the elections, some 14,000 people were seeking refuge at Internally Displaced People’s (IDP) sites at churches dotted across the capital, Bangui, following the renewed violence last September and October.

Pastor Justin Ngomi’s family was one of 3,400 other families who sought refuge at the Evangelical School of Theology in Bangui (or FATEB, its French acronym). They fled there on 26 October, when Muslim extremists of PK5 attacked their Christian neighbourhood.

“They looted and burned down several houses, including mine. We ran from our homes empty -handed,” he said.

This was the second time Ngomi and his family had faced that ordeal; the first was in December 2012 when the crisis first broke out.

“As a shepherd without sheep, it is a horrible time for us. Still, we have faith in God and pray for the return of peace. Though we have fellowship with others who are displaced, we cannot forget our brethren who lost their lives, and also their buildings, because they are Christians”.

“We heard gunshots, explosions and loud shouting from several corners outside. People were running helter-skelter. I tried to go [next door] to find out what was happening, but there I found one of my neighbours with a gunshot in the belly,” he said.

Kette and his family also fled to FATEB.

“The very next day after we fled, we got news that our home had been burned down also,” he said.

The displaced didn’t only face hunger. Like Ngomi and Kette, many were struggling to deal emotionally with the violence they have been exposed to.

The UN Independent Expert on CAR has called on the international community to continue supporting the country.

In a statement to the UN Human Rights Council (HRC) in Geneva on 22 March, following her recent visit to CAR, Marie-Thérèse Keita-Bocoum said: “There have been great steps taken, but the next six months are vital and the international community must continue to support the country, otherwise there is a risk of backsliding.”

Keita-Bocoum also congratulated the reconciliation efforts undertaken notably by the Interfaith-Platform jointly spearheaded by the Catholic Archbishop, Mgr Dieudonné Nzapalainga, the President of the Islamic Community, Imam Omar Kobine Layama, and the President of the Evangelical Alliance, Rev Nicolas Guérékoyamé-Gbangou.