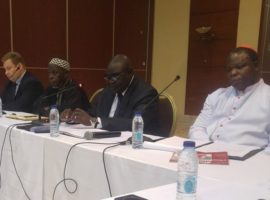 The rain that has fallen overnight has left a puddle in the church, and the pastor, Rev. Franco Mbaye-Bondoi, is worried that if the walls are not repaired before the heavy rains begin in two months, they may collapse. The dangerous cracks in the walls are the only signs left . . . Read More
April 12, 2018 Central African Republic Bambari, Bangui, Catholics, Central African Republic, Faustin-Archange Touadéra, Nicolas Guérékoyamé-Gbangou, PK5, Protestants, Seleka, UN, Women, Youth UN Secretary-General Antonio Guterres is in the Central African Republic (CAR) to draw attention to the world’s “forgotten crisis” and its heavy toll on aid workers and UN peacekeepers. The visit is happening a week after the UN Humanitarian Coordinator for the country told media that the deteriorating security situation . . . Read More