In Central African Republic, dozens of people are feared killed after suspected Islamist rebels attacked a group of civilians in the central town of Bria earlier this month.

Early reports suggested that between 12 to 14 people were killed during the attack on 4-5 September, but local sources contacted by World Watch Monitor said as many as 42 were killed, as details about the attacks are now emerging.

The massacre took place over two days, and it was a further two days until some youths were able to access the area to recover a dozen bodies.

“We received information that they had been killed, but no-one had the courage to immediately go and look for their bodies. It was only two days later [on 7 September] that some youths went and retrieved the corpses,” the source explained. “They brought them here and laid them in front of the MINUSCA (UN peacekeepers) office in the camp. They have since been buried.”

Other sources told World Watch Monitor that the victims were mainly women who were hacked to death while returning from farms to PK3, the predominantly Christian quarter of the town, to sell their farm products. Some of the victims also lived there, in PK3, the largest internally displaced persons (IDP) site in the Central African Republic, with an estimated 100,000 people, 80,000 of whom are IDPs, according to the UN.

Some of the victims had gunshot wounds, while others died of machete wounds. At least one of the women was pregnant. “All those women slaughtered! It is terrible,” lamented Gedeon, who lives in the IDP camp. “The situation is very tense here. Although it is relatively calm right now, there no movement, nothing.” 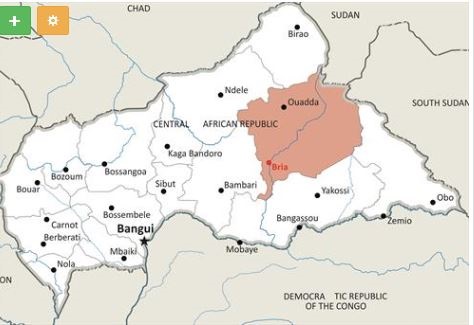 The massacre was attributed to members of the Popular Front for the Central African Renaissance (FPRC), one of the four factions of the now-disbanded Séléka rebel group active in Bria.

A week earlier (29 August) three ex-Seleka groups, including the FPRC and one Anti-balaka (vigilante) group led by Maxime Mokom, committed themselves to work for peace and political stability in CAR.

The agreement, known as ‘The Khartoum Declaration of Understanding of the Central African Armed Groups’, followed a two-day meeting for peace, brokered by Russia.

The meeting in the Sudanese capital took place at the same time as an official mediation effort led by the African Union (AU), with representatives of 14 armed groups, to finalise joint demands.

Despite the presence of UN peacekeepers, the town of Bria witnessed a wave of violence at the end of August following violent clashes between members of the FPRC and Anti-balaka vigilantes.

Since then, a relative clam has returned, but the movement of people, including humanitarian workers, is very limited.

One resident, speaking to a local radio under anonymity, said that between 29 to 31 August, ex-Seleka militants erected barricades on the road leading from the PK3 neighbourhood to the hospital.

A number of incidents, including armed robberies, kidnappings and other type of attacks against civilians, were reported. The Christian populations of the town said they had been particularly targeted.

“They [Seleka militants] don’t want to see any Christians here,” one church leader said. “They say all Christians are Anti-balaka, so if you are caught, you are gone. They falsely claim that even church leaders are heads of the Anti-balaka. Christians never go to town. If they do, they are threatened, arrested, and asked to pay fines before they are released. There is no way to move to town. They have barricaded all roads, and if you venture out, you are at your own peril. We Christians have nothing else to do, no food to eat, no place to go. We rely only on prayers. Please pray for us!”

“It is a very difficult situation for us here. We pray for God’s help for us,” another church leader in the camp said.

It was against that backdrop that the massacre of dozens of farmers took place. On Friday 7 September, an angry crowd (made up of women, community leaders and youths) transported the bodies of the victims to the headquarters of the MINUSCA.

The protesters accused the UN peacekeepers of not doing enough to protect civilians. A local aid worker told World Watch Monitor that they had lost trust in UN troops, who “tend to act as fire-fighters, waiting to count the death toll, despite the equipment – including aerial material – at their disposal”.

World Watch Monitor also earned that the massacre took place few kilometres away from the MINUSCA base.

On 13 September, a high-level meeting took place between religious and community leaders, representatives of armed groups and the MINUSCA, to assess the situation. But no decision has been made about the bodies yet to be recovered from the bush, and some fear an outbreak of disease.

The protesters – estimated to number 400 by the UN – were chanting: “We want FACA [the national army],” and saying that more would be killed if they were not protected. Their call was backed up by a local MP, representing Bria.

Speaking to media, Claude Andoche Ndénguéré-Gondy said he was saddened by the killings and called for the rapid deployment of the Central African armed forces to secure the city.

Central African Republic has witnessed an upsurge of violence in recent months, notably with attacks targeting churches and clerics in Bangui, the capital, and Bambari, the second main city of the country. Since January, four Catholic priests were targeted, with three of them killed in separate attacks. Security remains the key issue in CAR.