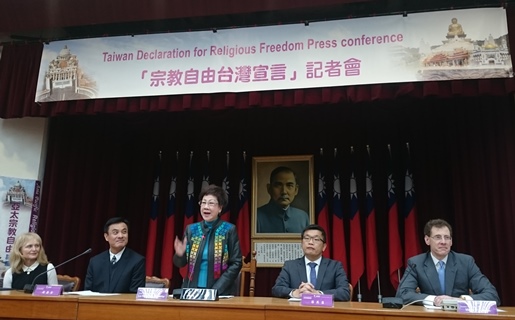 The first Asia-Pacific Religious Freedom Forum was held in Taiwan from 18-21 Feb, and hosted by former Vice-President of Taiwan, Annette Lu.World Watch Monitor

Persecution due to people’s faith has increased over recent years in the Asia-Pacific region, said speakers addressing the first Asia-Pacific Religious Freedom Forum, held from February 18-21 in Taiwan.

The conference, hosted by former Vice-President of Taiwan Annette Lu, was timed during Chinese New Year celebrations and right after the general elections in Taiwan.

A declaration, presented by the President of US-based Freedom House, Mark P. Lagon, affirmed a “commitment to establish and reinforce networks of advocates dedicated to promoting freedom of religion or belief in their respective countries and in the Asia-Pacific region, including the creation of both governmental and non-governmental mechanisms to promote freedom of religion.”

ChinaAid President Bob Fu, a former Chinese dissident himself, said the declaration was a roadmap “for those who wish for a free world”.

Participants came from 26 countries – including Pakistan, China, Cambodia, Indonesia, Malaysia, Thailand and Myanmar – to be part of the forum. They included representatives from charities and international NGOs which focus on freedom of religion, such as Open Doors International, which works with minority Christians worldwide.

No one nation or organisation can work alone to fight this rising tide of hatred. So there is need for a greater cooperation among those who want a peaceful world. Faith, hope, charity, love, mercy, liberty, peace and security can help to preserve these people.

“No society can build a future without providing freedom of conscience to its people. For this reason, free exercise of religion is the first guaranteed freedom in the United States,” she added.

Dutch politician and member of the European Parliament Bastiaan Belder said: “Freedom of faith is an inalienable gift from God to humankind – but societies try to deny it.”

The conference heard that the major threat to minorities used to come from intolerant groups, whereas today it tends to come from armies and states.

Republican Congressman Chris Smith, addressing the conference via a cyber connection, said that the world was facing an existential threat for people of faith. Christian populations in the Middle East and Muslims in Myanmar are on the run, he said, while anti-Semitism is rising across the world.

“No one nation or organisation can work alone to fight this rising tide of hatred,” he said. “So there is need for a greater cooperation among those who want a peaceful world. Faith, hope, charity, love, mercy, liberty, peace and security can help to preserve these people.” 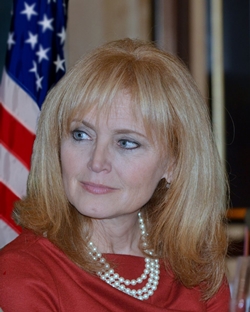 Norwegian parliamentarian Abid Raja said religion was a force that could either bring society into order, or disrupt it.

“Religion can really bring and sustain peace, but it can bring chaos as well,” he said. “So we need to see what type of future we want to give to our children.”

He said parliamentarians can play a vital role, saying “the International Panel of Parliamentarians for Freedom of Religion and Belief is striving to promote peace through religious liberty.”

The conference heard that the situation of Pakistan, Indonesia and Malaysia is similar in many ways – countries with constitutions that guarantee fundamental human rights, but whose state apparatus is not capable of providing these rights.

In Malaysia, its Chair of the Bar Council Human Rights Committee, Andrew Khoo, noted that innocent statements of piety enshrined in law become “monsters” and tools of discrimination, oppression and persecution over time. He said “peace” and “harmony” sound like beautiful words, but how they are actually practised is defined by the ruling majority – and not by the minority to whom they are relevant.

Indonesia’s Muhammad Imdadun Rahmat, of its National Human Rights Commission, also noted that the constitution of his country guarantees freedom of religion, but that, in practice, intolerance exists in Indonesian society.

Participants pleaded for attitudinal change rather than lots of fine words from state functionaries. They noted that states often use soft words, but that “hate speech”, which should be criminalised, is still common; that minorities face mass displacement; and religious conflicts are on the rise.

The forum demanded the preservation of religious diversity with universal values of freedom. Pakistani parliamentarian Aasiya Nasir said that no society could grow socially and democratically without religious liberties.

“Terrorism has become a universal phenomenon and we need to deal with it for our better future. Our country has recently effectively curbed the misuse of loudspeakers and so should other countries do too,” she said.

Repressive states will do whatever they can to sustain themselves. So freedom has to be fought for, and individuals of course pay the price for it. It also falls to the citizens of free governments to show love and solidarity with the victims of persecution.

Several participants were of the view that there is a great rift between academia and policymakers across the world, while NGOs must provide better research.

Pakistani-born Swedish politician Nasim Malik said that nations across the world have realised the need for peace and stability for development. He said the countries in the Asia-Pacific region should also realise this reality for their economic growth and prosperity. A similar viewpoint was shared by Brian J. Grim, President of the Religious Freedom and Business Foundation. Grim said that the global economy has become religiously diverse, so protecting religious freedom would strengthen the global economy as well.

UK Christian Democrat David Campanale presented the view that states are arbitrarily deciding when there is abuse of law – despite constitutional guarantees, and international standards available to them.

“Repressive states will do whatever they can to sustain themselves. So freedom has to be fought for, and individuals of course pay the price for it,” he said. “It also falls to the citizens of free governments to show love and solidarity with the victims of persecution.”

Campanale challenged the idea of a “value-neutral state”, stressing that the notion of rule-of-law in the United Kingdom’s constitution owes to its Christian roots.

“The sovereignty of the King was challenged for the first time under the Magna Carta, and he agreed to be subjected to the rule of law. The treaty between barons and the King was made by the-then Archbishop of Canterbury, Stephen Langton,” he said. “It is in the Old Testament that we see that the King is under the sovereignty of God; hence, the idea of rule of law and limited government comes from the Bible.”

The conference was hosted by ChinaAid and the Democratic Pacific Union, and sponsored by the Heritage Foundation, Taiwan Interfaith Foundation, Religious Liberty Partnership, Humanistic Culture and Education Foundation, International Religious Freedom Roundtable and the Lantos Foundation for Human Rights and justice.