Although the tiny East African nation of Eritrea has a population of just 6 million, Eritrea is one of the leading sources of refugees in Europe. There are many reasons for this, but chief among them is a lack of religious freedom.

The Eritrean government outlawed worship outside of Islam and the Orthodox, Evangelical Lutheran and Roman Catholic Church in 2002, driving all other Christian churches underground as they faced varying degrees of restrictions and attacks. Since then, thousands of Christians have been arrested and incarcerated without benefitting from a legal process. Among them are a number of prominent church leaders arrested in 2004, who remain incarcerated today, almost 12 years later. World Watch Monitor spoke with the family of one of these prisoners. 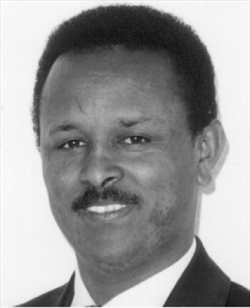 Haile Naigzhi, leader of Eritrea’s Full Gospel Church, was arrested during the early hours of 23 May, 2004. He was taken from his home to Police Station #1 in Asmara, then moved to Wongel Mermera – a dungeon-like prison in Asmara, where he still resides, alongside at least five other prominent church leaders (see list below). They have little hope of release any time soon.

For years following Naigzhi’s arrest, his wife and three children (names withheld to protect their identity) waited for his release. In 2013, his wife received credible information that the government wanted to arrest her and the children, so she decided to flee.

As World Watch Monitor reported last year, the journey out of Eritrea is fraught with danger. Movement in Eritrea is heavily controlled through an internal travel-pass system and checkpoints; anyone trying to cross the border can be shot on sight. If you make it past those first two hurdles, you reach the desert, exposed to the unforgiving elements and lawless human traffickers. Whatever destination you aim for after that could see you either crossing the Mediterranean on a rickety boat or dodging deportation from African countries with diplomatic and ideological ties to the Eritrean government.

World Watch Monitor cannot divulge the details of the Naigzhi family’s journey, nor where they ended up, but today they are settled in a new country, where they have been granted asylum.

“We feel safer here,” said Naigzhi’s wife. “We are able to freely serve God. I am also happy because the children are in a good school.”

But their 19-year-old daughter misses home. “Ever since we left our country, things have dramatically changed in a way we didn’t know they would. I knew the moment we left that we would have an uphill battle until we are able one day to go back home again. And it was all true.”

Naigzhi’s wife added: “I miss my husband dearly. It is very lonely for me.”

Their eldest daughter last saw her father when she was seven, whereas the youngest son (13) does not remember a time when they were all together.

The other boy, 17, last saw his father when he was five and confessed to also feeling homesick.

“I miss home, I miss my friends, and I miss our house,” he said.

“It is difficult, but we hold on to Jesus,” said Naigzhi’s wife.

Her daughter added: “We learnt that having a ‘bed-of-roses’ kind of life on earth is not actually God’s number one plan for us, but that everything we face in this world shapes our spirits into the beautiful spirit the Lord wishes to see in us. I am happy in every way and most especially to be the daughter of the Most High God. I am also happy to be the daughter of a prisoner for Christ. He is the best dad ever! God will make things perfect one day, and I trust Him with all my heart. He is faithful to keep His word.”

Eritrea is No. 3 on Open Doors’ 2016 World Watch List, which ranks the 50 countries in which it is most difficult to live as a Christian. No-one knows for certain how many Christians remain in the elaborate network of incarceration centres in Eritrea. Although there seems to have been a lull in arrests, pressure remains high on Christians and on society in general. Thousands are still intent on fleeing the country, the majority aiming for Europe. Hundreds have died trying.

Head of the Orthodox Church, removed from his position in 2007 after criticising the Eritrean government for interference in church activities. Two priests accompanied by government security agents entered the Patriarch’s residence and confiscated his personal pontifical insignia. He was replaced by Abune Dioskoros – a development orchestrated by the Eritrean government. Patriarch Antonios, who has never been charged with any offence, remains under house arrest and strict state surveillance.

Senior pastor of the Kale Hiwot Church. Arrested for participating in a Protestant wedding ceremony in Barentu on 9 January, 2005. Taken to Asmara Police Station No. 5, then subjected to 10 months of solitary confinement and hard labour at Sawa military camp. Released after six years, then re-arrested six months later, after a fleeing church member, who was being monitored, called him. Now back in prison in Barentu, where he has been for 11 years in total.

Senior pastor of the Full Gospel Church and member of the executive committee of Gideons International in Eritrea. When his vehicle was found abandoned in 2005, his wife and four children assumed he had been arrested. Believed to be in Wongel Mermera prison.

Leader of Eritrea’s Full Gospel Church, arrested at his home during the early hours of 23 May, 2004, and taken to Police Station #1 in Asmara.

Founder and senior pastor of Southwest Full Gospel Church, and member of the executive committee to the Full Gospel Church of Eritrea. Before he became a full-time pastor, Dr. Gebremeskel was also a mathematics lecturer and until 1999 was department and faculty head at the University of Asmara. Has a Ph.D. in mathematics from Chicago University. Taken from his home in Asmara Gejeret in May 2004. Wife and four children have not been able to visit him.

Anaesthetist and pastor of Massawa Rhema Church. Arrested on 3 June, 2004, five days after another pastor, Tesfasion Hagos (who has since been released and granted asylum in another country), visited his church and home. Arrested at a police checkpoint just before entering Asmara, as he was returning Pastor Hagos’ belongings to his home. Taken to the 2nd Police Station, where he was held for about two months, before being relocated to Wongel Mermera, where he remains. Unmarried.

Eritrea’s only psychiatrist. Also served as an Orthodox priest. Arrested in Nov. 2004 for allegedly being involved in the renewal movement within the Orthodox Church.

Expert theologian and Orthodox priest also arrested in Nov. 2004 for allegedly being involved in the renewal movement within the Orthodox Church.

Doctor and Orthodox priest also arrested in Nov. 2004 for alleged involvement in the renewal movement within the Orthodox Church.