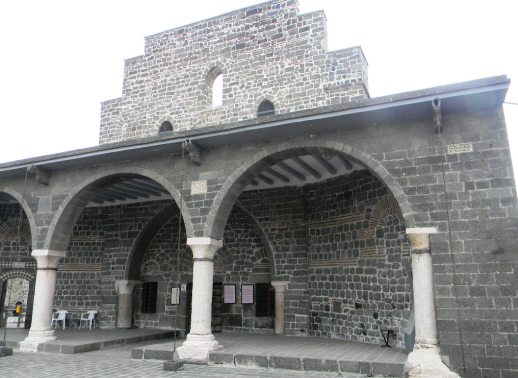 The 1,700-year-old Virgin Mary Syriac Orthodox Church in Diyarbakir was one of the churches seized.World Watch Monitor

After 10 months of urban conflict in Turkey’s war-torn southeast, the government has expropriated huge sections of property, apparently to rebuild and restore the historical centre of the region’s largest city, Diyarbakir.

But to the dismay of the city’s handful of Christian congregations, this includes all its Orthodox, Catholic and Protestant churches. Unlike the state-funded mosques, Turkey’s ancient church buildings – some of which pre-date Islam – have been managed, historically, by church foundations.

The new decision has effectively made the Diyarbakir churches – one 1,700 years old, another built only in 2003 – state property of Turkey, an Islamic country of 75 million.

Who are the Kurds?

Kurds make up an estimated 20% of the total Turkish population. The Kurds maintain the Allies promised them an independent state after World War II, which never happened. Since 1984, more than 40,000 have died in Turkey in the fight for autonomy. Over the past 10 months, the Turkish army have killed an estimated 5,000 PKK militants and lost 355 soldiers across the southeast, according to current government statistics. (The number of civilian deaths remains in dispute.)

Turkey’s southeast is heavily populated by Kurds – an ethnic Muslim group also extending across Turkey’s borders into Iran, Syria and Iraq, where Kurdish militias are prominent in all the regional fighting.

Fierce fighting, centring heavily on Diyarbakir, has escalated since the end of a two-year ceasefire between the Turkish armed forces and the militants of the Kurdish Workers’ Party (the PKK) in June 2015.

Churches affected and their historical significance

For much of the past 10 months, the small Christian communities of Armenians, Assyrians, Chaldeans and Turkish Christian converts have been unable to access their church buildings in Diyarbakir’s city centre due to the heavy fighting; several have suffered minor damages.

Few Christian houses of worship exist in Turkey’s southeast. Although it is the ancestral homeland of Syriacs and Armenians, well over a million of these ethnic Christians were massacred and sent on death marches during the final years of the Ottoman Empire at the beginning of the 20th century.

Diyarbakir’s Surp Giragos Church is the largest Armenian church in the Middle East. Sitting near the banks of the Tigris River, its large bell tower stands out as a symbol of Christianity’s once vibrant presence in the region.

First built in the 1600s, Surp Giragos was closed in the 1960s after the city became depopulated of Armenians. After the diaspora funded $1 million for its renovation, Surp Giragos reopened in 2011.

Very few Armenians still live in Diyarbakir. The church only holds services for major holidays like Christmas and Easter, when priests fly in from Istanbul to offer communion. The rest of the year it has remained open as a tourist attraction.

The new expropriation order, published in the government’s Official Gazette on 25 March, came from a council of ministers led by Turkish President Recep Tayyip Erdogan.

The government didn’t take over these pieces of property in order to protect them. They did so to acquire them.

The decision was based on Article 27 of Turkey’s Expropriation Law. According to Fatmagul Sari, the Minister of Environment and Urban Planning, the decision was made as a “last resort” to protect the area. In 2010, 330 structures in the Sur neighbourhood were demolished as part of an urban renewal programme.

The ruling has caused “disquiet” among Armenian, Syriac and Chaldean communities, according to the Turkish-Armenian daily, Agos. Multiple church foundations are preparing to appeal the decision. Archbishop Aram Atesyan of the Armenian Apostolic Church said he has demanded a meeting with Sari to ask the cabinet to correct the decision.

The Diyarbakir Bar Association is the first group to bring legal action against the decision. Any appeals must be filed within 60 days.

“Among the expropriated plots, there are structures belonging to public institutions … and places of worship and residences considered as historical and cultural heritage,” according to a statement in Agos. “This decision, which seems to be made by the request of the Ministry of Environment and Urban Planning without any reason or justification, is unacceptable within the limits of constitutional order.”

Despite sporadic violence, some of the churches are now beginning to hold Sunday services once again. But with the Turkish government as the de facto owner of the properties, they could be closed down at any time.

“They want to destroy the living spaces and houses of the people who have survived death and massacres in those places,” said Figen Yuksekdagi, co-chair of the pro-Kurdish Peoples’ Democratic Party (HDP).

She told a Turkish parliamentary group meeting on 29 March that nearly 90 per cent of the Sur district had been seized. “Where is the law and justice in this?” she asked. 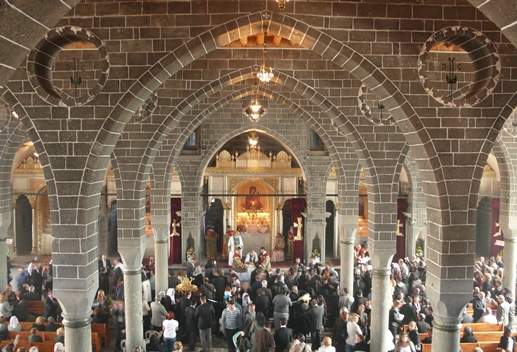 Worshippers celebrate the reconsecration of the Surp Giragos Armenian Apostolic Church in 2011, after it had fallen into serious disrepair. It once served as the metropolitan cathedral of Diyarbakir.World Watch Monitor

Gafur Turkay, a member of the Surp Giragos Foundation, told World Watch Monitor the government hasn’t told them when the church property would be returned. He is in discussion with lawyers about taking legal action. So far the foundation has not taken a public position on the matter.

Turkay is a grandson of a survivor of the Armenian genocide committed under the Ottoman Empire in 1915-1917. His family accepted Islam to escape persecution, but he has in recent years re-embraced Christianity and publicly identifies as an Armenian.

Perhaps most shocking was the expropriation of the Virgin Mary Church in the Lalabey neighbourhood. The 1,700-year-old Syriac Orthodox church is of enormous importance to Eastern Orthodoxy. It holds such holy relics as a piece of the cross and the bones of the apostle Thomas.

Fr. Yusuf Akbulut, the priest of the church, said that he is currently holding talks with the government to have the church property returned.

According to Adnan Ertem, head of the Directorate of Religious Foundations, the government seized these properties only to safeguard the historical district of Sur from further damage. But the authorities have set no timeline for the return of the church properties to their respective Christian communities.

Local municipal officials criticised the decision for lacking legal justification and its potential to cause enormous social and cultural damage to the city. Cultural heritage director Nevin Soylukaya called on property owners to take legal action against the government.

That is exactly what one Turkish cleric is thinking of doing. Ahmet Guvener, pastor of Diyarbakir Protestant Church, is considering opening a lawsuit. Barring success in Turkish courts, he said he could appeal to the European Court of Human Rights.

He considers the expropriation move a bid to take over the city’s church buildings.

“The government didn’t take over these pieces of property in order to protect them. They did so to acquire them,” he told World Watch Monitor.

Government officials argue that the decision was even-handed, since mosque properties were also expropriated in the move. These include the Kursunlu Mosque (an Armenian church converted into an Islamic building in the 16th century), the famed “four-footed minaret” at the 14th century Sheikh Matar Mosque, and the 12th century Hazreti Suleyman Mosque.

But in Turkey, mosques are already state property, since the government funds their construction and upkeep, and pays the salaries of their imams.

To Guvener, the expropriation shows Turkey’s preferential treatment of its mosques over its churches. He complained that the state is confiscating Christianity properties that were privately funded by local communities, while at the same time building large mosques in the United States.

Guvener was referring to the Turkish government’s funding of a massive mosque near Washington D.C., inaugurated on 2 April during Erdogan’s visit to the United States. The mosque is constructed in the style of imperial Ottoman architecture, with two large minarets.