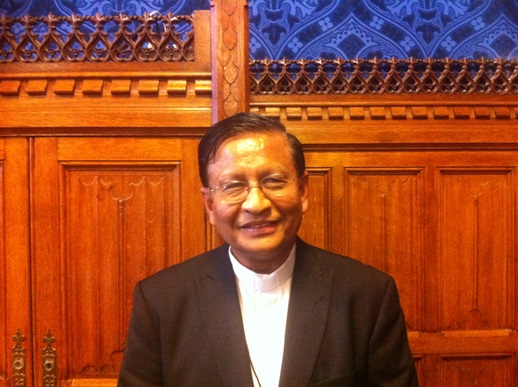 Myanmar’s first ever Catholic Cardinal has said protecting freedom of religion or belief for all is among the “biggest challenges” facing his country as it adapts to life after 50 years of “brutal” military rule.

“We desperately need to work to defend rights without discrimination, to establish equal rights for all people in Myanmar, of every ethnicity and religion,” said Cardinal Charles Maung Bo during an address at the UK Parliament in London yesterday (25 May).

“Freedom of religion or belief … is perhaps the most basic, most foundational human right of all,” he said. “True peace and real freedom hinge on an issue that has yet to be addressed: respect for Myanmar’s ethnic and religious diversity … Without the freedom to choose, practise, share and change your beliefs, there is no freedom.”

“The majority of the Kachin, Chin, Naga and Karenni peoples, and a significant proportion of the Karen, are Christians – and over the decades of armed conflict, the military has turned religion into a tool of oppression,” he said. “In Chin State, for example, Christian crosses have been destroyed and Chin Christians have been forced to construct Buddhist pagodas in their place. Last year, two Kachin Christian school teachers were raped and murdered. At least 66 churches in Kachin state have been destroyed since the conflict reignited in 2011.”

“Many have been killed in Myanmar’s ethnic and religious conflicts,” he said, “and hundreds of thousands have been displaced.”

The military has turned religion into a tool of oppression. Christian crosses have been destroyed and Christians have been forced to construct Buddhist pagodas in their place.

Cardinal Bo called on the new government, installed two months ago, to invite the UN’s Special Rapporteur on Freedom of Religion or Belief to visit the country, and warned against a set of new laws introduced by the outgoing government, known as the “Protection of Race and Religion Laws”.

He said these laws, which restrict the right to religious conversion and inter-faith marriage, “pose a serious danger for our country”.

“Such basic rights – whom to marry and what to believe – are among the most basic human rights, and yet these new laws restrict such basic freedoms,” he said. “These laws threaten the dream of a united Myanmar.”

Cardinal Bo also mentioned the threat of Buddhist nationalism, especially from the extremist “Ma Ba Tha” group, and said he was “deeply concerned” about a section of Mynamar’s Penal Code (Section 295) related to insulting religion.

“Although originally introduced in the colonial time with the intention of preventing inter-religious conflict, this law is now used to silence critics of extremist Buddhist nationalism,” he said. “Htin Lin Oo, himself a Buddhist, spoke out criticising the preachers of hate, saying that their message was incompatible with the teachings of Buddhism, and he was charged with insulting Buddhism and was jailed for two years. He was released last month.”

The Cardinal also highlighted the plight of the Rohingya Muslims, whose struggles he called “an appalling scar on the conscience of my country”.

“They are among the most marginalised, dehumanised and persecuted people in the world. They are treated worse than animals. Stripped of their citizenship, rejected by neighbouring countries, they are rendered stateless. No human being deserves to be treated this way,” he said. “Without [a solution], the prospects for genuine peace and true freedom for my country will be denied, for no-one can sleep easy at night knowing how one particular people group are dying simply due to their race and religion.” 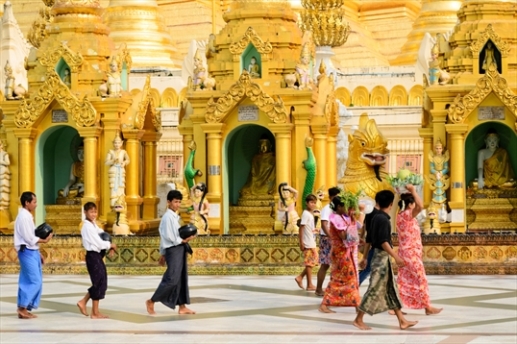 The Shwedagon Pagoda in the former capital, Yangon, is the largest Buddhist temple in the country.Open Doors International

Cardinal Bo said Myanmar is a “rainbow nation … a beautiful country made up of diverse ethnicities and religions”. He said the Catholic Church is representative of this, with followers from many different ethnic groups, and that the Church in Myanmar has long stood beside the marginalised.

“In all of this, where is the Catholic Church in Myanmar?” he said. “I can tell you with confidence that, at least until now, we are where the government is not. We are in the slums; we are in the camps for internally displaced people; we are working with our friends in the Buddhist and Muslim communities to promote inter-faith harmony; we are providing education, health-care and livelihoods; we are advocating for our people.”

In conclusion, Cardinal Bo called on the government to reject the new laws on race and religion; to stamp out Myanmar’s drug epidemic and alleviate poverty.

No society can be truly democratic, free and peaceful if it does not respect – and even celebrate – political, racial and religious diversity, as well as protect the basic human rights of every single person, regardless of race, religion or gender.

He said the government should follow the example of Jesus – “to give ourselves so that others may be free”.

“Against the fundamentalisms of hate, we must create a counter-fundamentalism of love,” he said. “My country is emerging from a long night of tears and sadness into a new dawn. After suffering crucifixion as a nation, we are beginning our resurrection. But our young democracy is fragile, and human rights continue to be abused and violated.

“We are a wounded nation, a bleeding nation. For ethnic and religious minorities, this is particularly true, and that is why I conclude by emphasising that no society can be truly democratic, free and peaceful if it does not respect – and even celebrate – political, racial and religious diversity, as well as protect the basic human rights of every single person, regardless of race, religion or gender.

“We are a rainbow nation, a nation of many different ethnicities, cultures, languages and religions. That is its beauty and it is something to be protected, defended, cherished and strengthened.

“I believe, truly, that key to inter-religious harmony and peace is that most basic of human rights, freedom of religion or belief for all.”