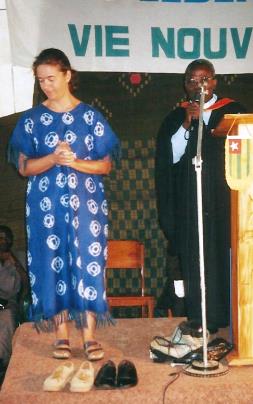 Beatrice Stockly, left, in Timbuktu 2000. She was first kidnapped in 2012World Watch Monitor

UPDATE (17 June): Al-Qaeda in the Islamic Maghreb (AQIM) has released a video, purporting to show that a Swiss nun kidnapped in Mali in January is alive and in good health.

The three-minute video, posted on social media yesterday (16 June), shows a veiled Beatrice Stockly speaking in French, saying that she has been detained for 130 days but is in good health and has been treated well, although it has been very hot. She concludes by thanking her family and the Swiss government for all their efforts to secure her release.

Previous report (15 February): Al-Qaeda in Africa has claimed the kidnapping of the Swiss missionary Beatrice Stockly, who was abducted in Mali in January.

In an eight-minute video, in which Stockly appears dressed in a black hijab, a masked speaker with a British accent claims responsibility on behalf of Al-Qaeda in the Islamic Maghreb (AQIM).

“Beatrice Stockly is a Swiss nun who declared war against Islam in her attempt to Christianise Muslims,” the speaker said.

The conditions of her release include setting free AQIM fighters jailed in Mali, and one of their leaders detained at the International Criminal Court at The Hague. Switzerland has demanded her unconditional release.

AQIM, which is based in the Sahara Desert between Mali, Niger and Algeria, was involved in the January attack in Ouagadougou, the capital of neighbouring Burkina Faso, which left 29 dead, including a US missionary and six Canadians visiting the country on behalf of a church. Last week AQIM released Jocelyn Elliott, an Australian Christian woman kidnapped with her husband in northern Burkina Faso on the same day as the attack in the capital. The Islamist group said in an audio recording that it released Mrs Elliott so as “not to make women involved in the war”.

Stockly was taken from her home in Timbuktu by armed gunmen on 7 January. It was the second time she had been kidnapped by Islamists. The most important condition of her release, the speaker in the video said, was that she did not return to any Muslim land preaching Christianity. The Swiss government had warned her not to return to Mali after her release in 2012.

A Swiss missionary abducted for 10 days in 2012 has been kidnapped again in Mali’s northern city of Timbuktu, sources tell World Watch Monitor.

Beatrice Stockly was taken from her residence before dawn on 8 Jan. by armed men, who arrived in four pickup trucks, according to the sources, whose names are being kept confidential for their safety.

No group has yet claimed responsibility for the kidnapping. Militant Islamist groups are active in the region, where two attacks within the past seven weeks, one of them at a Christian radio station just before Christmas, have left 25 people dead.

A local church leader, who claimed to have previously worked with Stockly, told World Watch Monitor the missionary settled in Timbuktu in 2000, working for a Swiss church, before starting work alone, unaffiliated with any church.

He said Stockly is in her forties and leads an austere life, selling flowers and handing out Christian material. She was described as sociable, particularly among women and children.

Her home is in Abaradjou, a popular district of Timbuktu frequented by armed jihadist groups. She was taken from that same residence in April 2012, when northern Mali was occupied by armed Islamist groups. She was released 10 days later, following mediation led by neighbouring Burkina Faso.

During the 2012 occupation, Christians, a minority in Mali, have paid a heavy price. For most of the year, armed Islamist groups ruled the region, banning the practice of other religions and desecrating and looting churches and other places of worship.

Thousands, including many Christians, fled and found refuge in the south, or in neighbouring countries such as Niger and Burkina Faso. Others fled to Bamako, the capital, and other safer towns in the south.

Unlike other Christians, Stockly remained in the city. At her mother and brother’s urging, she returned to Switzerland after her 2012 kidnap, but soon returned, saying, ”It’s Timbuktu or nothing”.

The Mali government and the predominantly Tuareg rebel groups signed a peace agreement in June 2015, with limited impact. Jihadist groups have regained ground and intensified attacks, targeting Mali security forces and UN peacekeepers. Their scope has spread to southern regions previously spared by their incursions.

On 17 Dec., three men were killed when an unidentified gunman opened fire outside Radio Tahanint (Radio Mercy in the local dialect), which is closely linked with a Baptist Church in Timbuktu. Hamar Oumar Dicko and Samuel Dicko worked for the station; Abdal Malick Ag Alher was a visiting friend.

Dr. Mohamed-Ibrahim Yattara, President of the Baptist Church in Mali, told World Watch Monitor at the time that Christians were “shocked to see what happened”.

“We are trying to find out what happened, but for now we don’t have any explanation,” he said.

“It’s a Christian radio station that was broadcasting messages of peace lately. One of the young men who was shot last night, he had just finished broadcasting and his last words were about peace.”

“Insecurity is everywhere in Mali,” Yattara said. “The situation is very frail, but we didn’t see a particular threat to the community.”

About one month earlier, terrorists killed 22 people at the Radisson Blu hotel in Bamako. The government imposed a state of emergency that expired on 22 Dec., then extended it to 31 March.

It is thought that the abduction of Stockly is the first of a foreigner since the kidnapping and killing of two French journalists, Ghislaine Dupont and Claude Verlon, in the northeastern town of Kidal in November 2013.