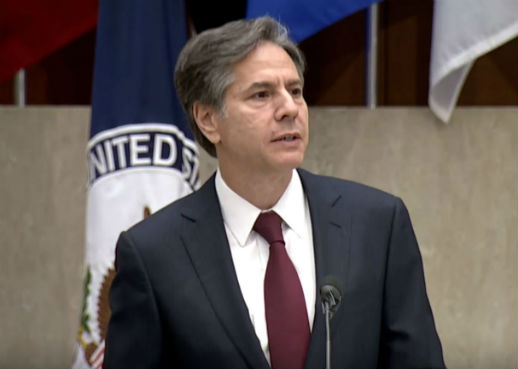 Two years after being driven from their homeland by the so-called Islamic State, displaced Iraqi Christians continue to endure desperation, their leaders said 28 July in Washington, D.C.

“What I saw as a bishop and as a pastor was a great loss of hope,” said Mar Awa Royel, a bishop of the Assyrian Church of the East, about his time with Christians who fled IS to the relative safety of Iraq’s autonomous Kurdistan region. Royel made his remarks during the public portion of a two-day conference held by the Religious Freedom Project at Georgetown University’s Berkley Center for Religion, Peace and World Affairs.

“What impresses me and the churches working on the ground is the human aspect of this; that there is no respect for human life,” Royel said. “Two years after [Christians and Yazidis] were first displaced, our communities are still in survival mode. And that’s not a good thing.”

Many Assyrian Christians, indigenous to the region, have lived in cities such as Mosul, Iraq, for more than a thousand years. Royel, who presides over diaspora in the Diocese of California, said many of his Church members want to remain in their homeland, but right now that’s impossible. IS attacks have left their communities in ruins, destroying both physical and economic stability.

Two years after the IS rampage across northern Iraq, “there is still an urgent need for food. Many families have no work and their supplies are running out. Even if someone gets a job in Kurdistan they often won’t get paid,” said Father Behnam Benoka, founder of Mart-Shmoni charitable clinic and the Humanitarian Nineveh Relief Organization, serving displaced people in the Ankawa suburb of Iraq Kurdistan’s capital, Erbil.

The conference goal was to “inform policymakers about the continuing travail of religious and ethnic minorities threatened by ISIS, and to galvanize long-term thinking about addressing this crisis.”

Royel recommended creating an international coalition where all persecuted minority groups can engage in an open dialogue. Amid the current cacophony, little dialogue takes place. A formal structure will

Knox Thames, the US State Department’s Special Advisor for Religious Minorities in the Near East and South and Central Asia, said the “protection of religious and ethnic minorities in Iraq and Syria is a foreign policy priority of the United States”.

“The best way to defeat Da’esh and its ideology of hate is by protecting what they have tried to exterminate: religious and ethnic pluralism,” he said, using the English pronunciation of the Arabic acronym for IS.

David Saperstein, US Ambassador-at-Large for International Religious Freedom, told the 250 delegates to the Georgetown conferencethat evidence gathered during the public part of the conference on “Threats to Religious and Ethnic Minorities under the Islamic State” would be “vital to our deliberations” at the closed-door portion of the two-day conference, 29 July.

From the archive: New urgency for an old idea

Now is the time, advocates say, to carve out armed, self-governed spaces within Iraq, to protect Christians and other minorities, and provide some reason for despairing refugees to remain in their homeland.

Read about it here

Saperstein said the first step to restore stability is to destroy IS. Success in the war against terror groups in the region means they now retain only 50 per cent of the territory they once had; their oil reserves are down by 30 per cent and thousands of militants have died in air strikes, he said.

However, Anthony Blinken, US Deputy Secretary of State, told the conference that, as IS appears to collapse in the region, the world will see more attacks on civilians, as the extremist group tries to “adapt by encouraging indiscriminate attacks in as many places as possible”.

Speaking on re-establishing the rule of law in the region, Blinken said security forces and institutions must “reflect the diversity of the country”. Security formations must be organized “from Iraq’s religious minority communities, including from Shabak, Yazidi, and Christian communities that are incorporated into this, be it Peshmerga or Iraqi Security Forces, to serve as the future local security forces and police that minority groups will look to in order to feel safe and secure” he said. (Link to video here)

The conference, which was supported by the U.S. State Department’s Office of International Religious Freedom, together a range of religious, governmental, and NGO representatives from more than 25 countries.