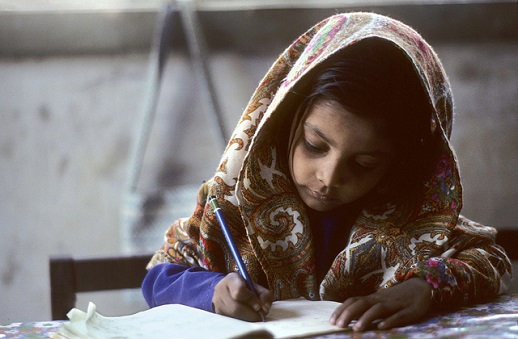 A young girl does her school work in Karachi, Pakistan, in a 2011 photo.UN Photo / John Isaac / Flickr CC

A report by Pakistan’s National Commission for Justice and Peace (NCJP) says the government has failed to keep its promise to eradicate religious “hate material” from textbooks used in schools.

When a Taliban attack on the Army Public School in Peshawar in Dec. 2014 led to the loss of least 141 lives, including 132 students, it brought about a policy change in Pakistan. The government introduced a 20-point National Action Plan to discourage religious extremism and to provide a counter-narrative to promote religious harmony in the country, saying an “end to religious extremism and [the] protection of minorities will be ensured”. However, the NCJP report, “Freedom from Suffocating Education”, claims that no curriculum reforms have been adopted at the school level, aside from the production of a few booklets.

This backs up the findings of another recent report by the US Commission on International Religious Freedom, which concluded: “The trend toward a more biased curriculum towards religious minorities is accelerating. These grossly generalized and stereotypical portrayals of religious minority communities signal that they are untrustworthy, religiously inferior, and ideologically scheming and intolerant.”

The NCJP report (in Urdu), which focused on textbooks used in the 2015-16 school year, noted that “hate material” previously identified had not been removed from the curriculum. It also noted that Pakistan’s Sindh Assembly had failed to keep its promise to include the complete text of “Father of the Nation” Quaid-i-Azam Mohammad Ali Jinnah’s speech of 11 Aug. 1947, in which he said:

Only “a small portion of the speech” is included in textbooks, it noted.

On 14 Dec. 2014, two days before the Peshawar school tragedy, the Punjab home secretary briefed the Supreme Court of Pakistan about curriculum reforms. He said students would be taught that “we are all members of the one human race, with similar challenges, and we cannot confront these challenges without forging a common alliance … The message of all faith is common and for benefit of the entire humanity.”

“No person attending any educational institution shall be required to receive religious instruction … other than his own,” states Article 22(1) of Constitution of Pakistan. However, Cecil Shane Chaudhry, the general secretary of the NCJP, told World Watch Monitor: “Non-Muslim students opt to study Islam so that they are not stigmatised in the classroom.”

Chaudhry added that good marks are easily obtainable in Islamic Studies, rather than the more general subject of “Ethics”. “Ethics textbooks are not available in the market and, in schools, no teachers are available to teach this subject,” he said. “Also, Ethics books are written from an Islamic viewpoint and the students who select Ethics are stigmatised by teachers and students.”

The NCJP study also questioned policymakers on this subject, saying: “If Ethics can be a substitute for religious studies for non-Muslim students, then why can’t it be equally beneficial for Muslim students?”

Meanwhile, in the province of Khyber Pakhtunkhwa, the conservative Jamaat-e-Islami party has from primary school textbooks, such as pictures of unveiled females or any depictions of the Christian faith.

The NCJP study cited several passages from textbooks that teach falsehoods about other religions, or criticise or encourage animosity towards them:

• The Punjab Textbook Board’s Class III (ages 7-8) book on Urdu teaches that Islam is “superior” to all other religions.

• The Sindh Textbook Board’s Class VII (ages 11-12) book on Islamic Studies teaches: “Most of the [other] religions of the world claim equality, but they never act on it.”

• The Punjab Board’s Islamic Studies textbook for Class VIII (ages 12-13) reads: “Honesty for non-Muslims is merely a business strategy, while for Muslims it is a matter of faith.”

• For Class VI (ages 10-11), the Punjab Board’s Islamic Studies book says: “For the person who is not in financial need, is not governed by a tyrant and still does not perform [the pilgrimage to Mecca], it does not make a difference whether he dies as a Christian or a Jew.”

• The Punjab Board’s Class VI book on Islamic Studies says: “Though being a student, you cannot practically participate in jihad, but you may provide financial support for jihad.”

• The Punjab Board Class V (ages 9-10) Social Studies book says: “Religion plays a very important role in promoting national harmony. If the entire population believes in one religion, then it encourages nationalism and promotes national harmony.”

• “The better a Muslim we become, the better a citizen we prove to be,” says the Punjab Board’s Class IV (ages 8-9) book on Urdu.

Every textbook continues to use the Urdu word “Isai” (derived from “Isa”, the Arabic word for “Jesus” used in the Qur’an) for “Christian”. As World Watch Monitor has reported, the word now carries strong overtones – from colonial times – with the “unclean” demeaning occupations done by the lowest castes.

History is a subject of particular contention in the report. Pakistani textbooks refer to centuries of “Islamic rule” and “jihad” in the Indian subcontinent. However, Pakistani historian and author Dr. Mubarrak Ali told World Watch Monitor: “It is wrong to say ‘Islamic rule’ or ‘Hindu rule’. The Indian wars were political conflicts and not religious conflicts. The political conflict in the Indian subcontinent is seen as a religious conflict, which is why history is described in a binary opposition. We want to see history in black and white, while multiple facts decide one incident.”

Here are some of the other contentious or inflammatory passages cited in the report:

• The Pakistan Studies book from the Punjab Board for Class IX (ages 13-14) students says: “The free status of Islam and Muslims was hurt with the establishment of British rule. Muslims under non-Muslims remained enslaved and coerced.”

• The Sindh Class VIII book on Social Studies says: “The influence of Christian priests increased greatly [during British rule]. Christian priests were able, with the help of their government, to openly preach their religion.”

• The Class VII Baluchistan Textbook Board book on Urdu says: “The British … feared the Muslims, being the true inheritors of the rule of India, could become a danger for them anytime.”

• “Another book shows that the accusations against [Mughal Emperor of India] Aurangzeb of bias towards Hindus are purely a fabrication of the narrow-minded Hindus and treacherous British,” says the Punjab Board’s Urdu textbook for “matriculates” (ages 15-16).

• The Class V book on Islamic Studies by the Punjab Board states: “The Muslims ruled the Indian subcontinent for about thousand years with magnificence, but they did not forcibly convert a single Hindu. If they had willed, then today there wouldn’t even be a trace of them in the subcontinent. But Muslims showed great tolerance and even raised Hindu to high positions.”

• The Punjab Board’s Class VI History book reads: “Most of the population of Delhi consisted of Hindus who considered Muslims strangers. They … were always busy in thinking about getting free from the rule of Muslims. Hindu landlords used various excuses to not pay land revenue and even sometimes descended into revolt. The Hindus were so much encouraged by [Emperor] Akbar’s pro-Hindu policies that they started demolishing mosques and shrines and started building their temples in their place. Wherever Hindus were in majority, they brutalised Muslims.”

• The History textbook for Class VIII students, published by the Khyber Pakhtunkhwa Textbook Board, reads: “Sikhs used to do many brutalities to Muslims and did not allow them religious freedom … The British did not trust Muslims and the policy of injustice and brutality hurt economic and educational conditions of Muslims. And the discriminatory attitude of Hindu landlords further made their condition worse. Under the influence of Hindus, they adopted several heresies.”

• The Punjab Board’s History textbook for Class VII states: “In those days, Sikhs ruled the Khyber Pakhtunkhwa. Sikhs had made the life of Muslims terribly difficult. Syed Ahmed Shaheed decided to wage jihad against Sikhs.”

• The Punjab Board Social Studies book for Class VII says that Bangladesh became its own independent nation in 1971 – no longer East Pakistan – due to a conspiracy of “enemy countries of Islam”.