The three top faith leaders of the Central African Republic (CAR), who’ve won international recognition for efforts to end conflict in their country, have welcomed the appointment of a prosecutor for a Special Criminal Court.

CAR has been beset by religious and ethnic conflict between mainly Muslim Séléka rebels and mainly animist “Anti-balaka” (anti-machete) vigilantes since Séléka seized power in a coup in March 2013 which has claimed thousands of lives with hundreds of thousands displaced.

In January 2015 a UN commission reported that crimes against humanity have been committed by all parties, confirming previous findings by the International Criminal Court in September 2014. They include murder, torture, rape, attacking personnel or objects involved in humanitarian aid, pillage, and the use of child soldiers under the age of 15.

Now the appointment on 15 Feb. is a “significant step in the right direction”, Rev. Nicolas Guérékoyamé-Gbangou, chairman of the “interfaith platform”, told World Watch Monitor.

“We’ve always said that we cannot achieve peace without justice. It is important to determine the responsibilities of each different actor before arriving at forgiveness and reconciliation,” he said.

“Impunity has fuelled a cycle of violence. For more than three decades, and even since independence in 1960, true justice has never been done to appease the hearts and comfort those who have suffered injustice in this country.”

Warlords suspected of committing past and ongoing atrocities have never been held to account.

“It’s important to put an end to this scourge of impunity,” added Rev. Guérékoyamé-Gbangou, President of the country’s Evangelical Alliance. “We believe that this appointment is in line with our concerns and requirements”.

“While the mandate for the court dates back to 2003, it could be crucial to ending the impunity that has driven the recent conflict,” he said. “Further staffing of the most qualified individuals, without delay, is now needed so that the court can proceed with investigating and prosecuting the crimes.”

It was in June 2015 that interim president Catherine Samba-Panza brought a law creating a Special Criminal Court to investigate and prosecute grave human rights violations committed since 2003. It’s to have 27 judges, 14 from CAR and 13 from other countries, to provide expertise in the prosecution of international crimes.

Its new prosecutor, Toussaint Mukimapa, is from neighbouring Democratic Republic of the Congo (DRC), which has itself been ravaged by violent unrest in recent years. More than 6 million have lost their lives there in what the BBC described in 2013 as the world’s bloodiest conflict since World War II: “…a conflagration that has sucked in soldiers and civilians from nine nations and countless armed rebel groups, has been fought almost entirely inside the borders of one unfortunate country – the Democratic Republic of Congo”.

Mr Mukimapa, was formerly the Attorney General of the Armed Forces of the DRC – a role that enabled him to accompany UN agencies and NGOs in supporting the courts.

In 2015, he initiated a process in DRC to speed up the prosecution of international crimes within the ICC, participating in the transfer of warlords Thomas Lubanga and Germain Katanga, both convicted by the ICC, and Mathieu Ngudjolo Chui, who was acquitted.

His appointment also marks a step towards the establishment of an African-based system of justice, said Rev. Guérékoyamé-Gbangou.

“We believe that Africans should take responsibility,” he said. “It’s not only Europe or the West that can come and do justice to us. Africans should be able to judge African affairs because there are Africans who used to carry out justice in the framework of traditional justice.

“Africans appointed to fill these positions of responsibility must therefore live up to the trust placed in them.” 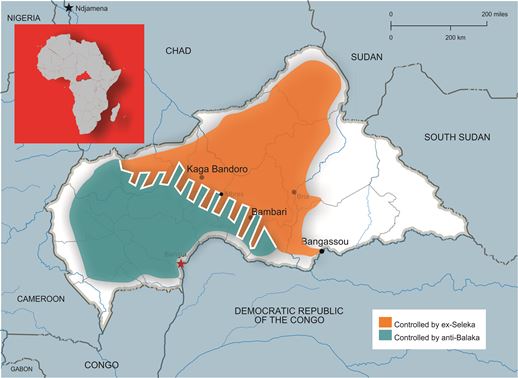 Though CAR is gradually regaining stability, entire regions in the north and north-east are still occupied by armed groups. More than 20,000 in Bambari (central CAR), were forced to flee into the forest because of the fighting between two rival factions born from the disintegration of Séléka: the Popular Front for the Rebirth of CAR, and Unity of the CAR People.

Ex-Séléka rebel groups have either formed alliances or fought each other, depending on circumstances, for the control of economic activities – including the exploitation of mines (such as gold in the Bambari area), extortion along main roads, cattle rustling and smuggling. So-called Anti-balaka self-defence groups (created to fight Séléka) have also entered into alliances and rivalries for essentially economic and criminal reasons.

The capital, Bangui, has not been spared the rebels’ activities. A recent outbreak of violence on 7 February left a pastor, Jean-Paul Sankagui, dead and three churches demolished or burnt down. Sankagui, 67, leaves a widow and 12 children.

His funeral, at the Omnisport Stadium, was attended by thousands, including the Prime Minister and the President of Parliament, the highest ranking Muslim politician in CAR.

Hundreds of other Muslims also attended the ceremony and expressed their sorrow for the late pastor, known for his commitment towards peaceful co-existence between Christians and Muslims. They also condemned the presence of ex-Séléka rebels, who, they said, are preventing the return of peace in PK5’s Muslim neighbourhood.