A pastor in northern France has described her church’s ministry to Middle Eastern migrants in a nearby camp as “the mission field coming to you”.

The church’s leader, Pastor Lydie Granger, said that among the estimated 1,400 migrants living in the camp outside Dunkirk were around 40 Iranians who had already converted to Christianity, and others who had become Christians since attending her church.

Volunteers from the Dk Live church visit the nearby state-regulated migrants’ camp daily, offering friendship and listening, bringing clothes, trainers and sleeping bags, and even taking to hospital migrants injured in failed attempts to board England-bound lorries.

The camp has grown since the closure of the Calais camp known as the “Jungle” last October, and is home, at least temporarily, to Iraqi Kurds, Iranians, Afghans and even Vietnamese, all of whom are waiting for the opportunity to be smuggled across the Channel to Britain at a cost of several thousand pounds per head.

“We met an Iranian group, non-Christian except for one who could translate, but very interested [in Christianity],” recalled Ms Granger. Over six months, “all of them became Christians”.

She acknowledged that some of them may have had mixed motives: “In that group you had some very true conversions and maybe two to make their applications easier.”

Mrs Granger knows that the migrants may be there one week and gone the next, or may attend her church for months on end. To accommodate this new section of the congregation, the church runs weekly Farsi Bible studies, and, during the Sunday service, one worship song is sung in Farsi, to the delight of the migrants who attend.

A bookstand by the door of the church displays Bibles in Farsi, Arabic and Vietnamese. The church organises lifts from the camp to the church and back, and puts on hot a meal after the mid-week Bible study and the Sunday service. 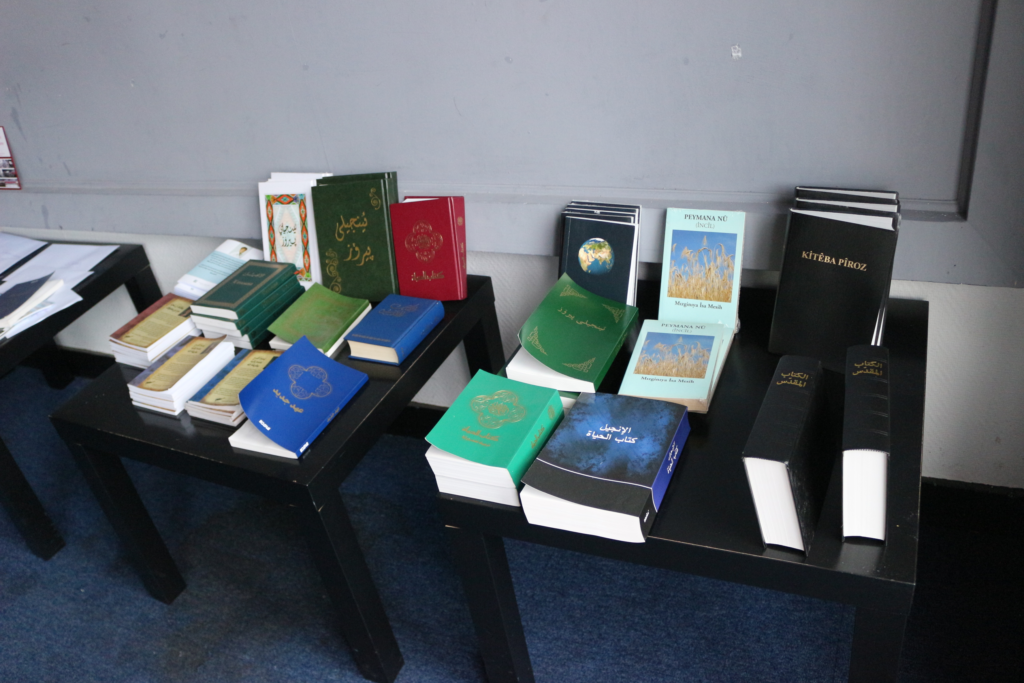 One Iranian migrant who attends, Ramin, 35, ran an underground church in his home in the city of Shiraz after becoming a Christian five years ago. It would be attended by between three and 20 people. He was brought up Zoroastrian and initially rebuffed a friend’s invitation to attend a “house church”.

“One day I gave in. I went – and during the prayers I fell asleep. Afterwards, I was changed,” he said. “My work changed – I used to manage a bookshop and play as a wedding musician. After I became a Christian, I couldn’t get any work and became a taxi driver. But I felt at peace.”

He said he felt God saying: “‘Change, Ramin, please change.’ I would drink beer and vodka and go out dancing. I had three cars. I felt Jesus say, “‘Ramin, please stop.'”

Ramin said there followed a domino effect of family and friends wanting to become Christians.

“After that, I spoke to my wife. And my wife spoke to her sister, her sister spoke to her husband, her husband spoke to his uncle … many family and friends became Christians and they were in our house a lot to pray, and I was happy,” he said.

Asked how he trained as a pastor in a country where converting to Christianity is illegal, he said he used resources published by UK-based Elam Ministries, and took part in phone-ins on Farsi-language Christian television channels SAT-7 and Mohabat TV.

Ramin fled with his wife and daughter after he was repeatedly arrested. He said police beat him, threw hot water over him and deprived him of sleep. His nine-year-old daughter was expelled from school. The headteacher rang him and complained that she “was always talking about Jesus”.

He said England is his hoped-for destination because there is a Farsi-language Bible college he wants to attend there.

Sara, 43, from the south of Iran, became a Christian two years ago after having a dream of Jesus “on the cross … and sunshine, light shone out from it.”

As a young child she saw a film about Bernadette of Lourdes, who is venerated by the Catholic Church. “I liked Jesus and Mary [from the film], but every time I asked, ‘Who is Jesus? Who is Mary?’ I got no answer. People would say ‘He is the same as Muhammad.’ But my father, a former colonel in the army, had a library of 2,000 books at home, and there I read the Bible. That was 12 years ago. But my father would shout at me for reading it. I didn’t like Muslim prayer – five times a day, in Arabic. My parents were very devout. I liked reading the Bible. I read but I didn’t understand. Just one word – I felt Jesus say, ‘Just understand forgiveness’. I needed a teacher. But then, there was no Internet, you couldn’t look on your mobile phone to find a church.”

A woman invited her to an underground church, and Sara invited her husband. However, she and her husband decided to leave when she received a phone message telling her that the secret police were coming for people who attended the underground church, that two people had already been arrested, and that she should erase the message and leave her house.

“They questioned my father and cancelled his pension,” she said quietly. Her parents have both since died and she said she thinks their reprimand by the authorities caused their health to deteriorate. More tragedy followed: during the journey from Iran to France, she miscarried at four months.

Hadi, 31, became a Catholic five years ago and attended one of the country’s few underground Catholic churches. He left Iran after his family rejected him, and paid £2,000 (around $2,400) to get from Iran to Germany, via Turkey, Macedonia, Serbia and Slovenia. He got baptised in the southern German city of Nüremberg, but was fined by police after an altercation with a friend. He said that when the judge considered his application for asylum, “my baptism papers were missing because they were not ready”. Once his application was rejected he decided to head for England, but he said he needs to raise £4,000 to be smuggled there.

Mrs Granger reflects: “I’m very open to the stranger: I do missions in Africa, I go to Algeria, I just love people. We need people in churches to love people and be open.” With conflicts, poverty and climate change creating migrants and refugees who end up in northern France, she said “I’ve had to say to the church, ‘The world is changing and, if we don’t accept that, we’re going to be in big trouble'”.

The Christian presence hidden in Iran is becoming visible in the migrant camps of Europe – as are Muslims interested in the churches that are helping them – which challenges her church to work cross-culturally. “This is not going out to missions, this is the missions coming to you,” she said.