An influential US government commission that monitors religious freedom around the world is urging President Donald Trump and his new administration to take concrete steps to make advocacy of universal religious rights a priority in American foreign policy.

“Our foreign policy should not simply be about US self-interest – you know, national security and trade. It should also be about the ideals and values for which this country is known,” said Rev. Thomas Reese, chair of the US Commission on International Freedom (USCIRF). The Jesuit priest added, “We also believe that promoting religious freedom around the world is in our national self-interest.”

Commission Vice-chair Daniel Mark, a professor of political science at Villanova University in Pennsylvania, called on Trump administration officials to ensure that international religious freedom “never be overlooked or relegated to second-tier status” in US diplomatic engagements. “All people have the right to freedom of religion or belief – all people, in all places, at all times, to believe or not believe,” he said.

“The blatant assaults have become so frightening – attempted genocide, the slaughter of innocents, and wholesale destruction of places of worship – that less egregious abuses go unnoticed or at least unappreciated”

The officials made their remarks during a briefing in Washington DC on Wednesday (17 May) to discuss USCIRF’s 2017 annual report, which documented violations of religious freedom in more than 35 nations during 2016. The annual assessment detailed a “worsening” situation for the exercise of belief in many parts of the world.

“The blatant assaults have become so frightening – attempted genocide, the slaughter of innocents, and wholesale destruction of places of worship – that less egregious abuses go unnoticed or at least unappreciated,” the report asserted, adding that “many observers have become numb to violations of the right to freedom of thought, conscience, and religion.”

Founded in 1998, USCIRF is an independent, bipartisan commission of the federal government that monitors the right to freedom of religion and belief abroad. Its commissioners are appointed by the president and members of Congress from both political parties. USCIRF has no legislative powers, but assesses American policy and makes country-specific recommendations. 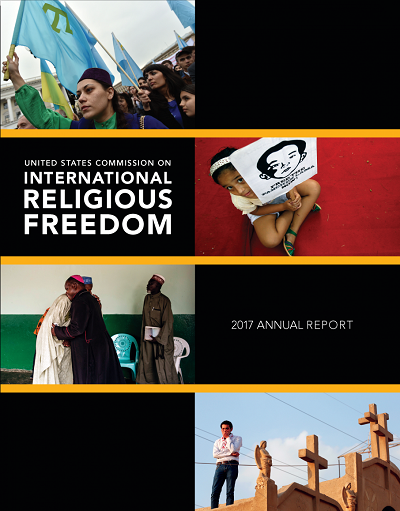 As World Watch Monitor reported at its launch in April, this year’s report for the first time included Russia on its list of the world’s worst oppressors of religion, known as “countries of particular concern”.

“The Russian government has shown itself to be a systematic, ongoing and egregious violator of religious freedom,” said Mark, citing Russia’s crackdown against Jehovah’s Witnesses and other religious minorities. “The United States, through the Department of State, needs to recognise this fact and send a clear message to Russia that we will not abide its continued campaign of attack and intimidation against freedom of religion or belief.”

With many administration positions still unfilled, commission members called on Trump to quickly appoint “a well-qualified and experienced” person to be the next Ambassador-at-Large for International Religious Freedom. The prominent diplomatic role was created in 1998.

“We need a strong voice in the State Department in the role of Ambassador for Religious Freedom,” said Reese.

In addition, commissioners urged US diplomats to be more proactive in raising specific cases of persecution. USCIRF has launched a new “Prisoner of Conscience Project” to highlight individuals imprisoned because of their beliefs. Commission members have selected particular prisoners and will advocate for each of them.

Reese selected Patriarch Abune Antonios, the 89-year-old leader of the Eritrean Orthodox Church, who has been held incommunicado in Eritrea for what will be ten years on 27 May.

Other USCIRF members are advocating for Nguyen Cong Chinh, an Evangelical pastor detained in Vietnam since 2011; Baha’i leaders imprisoned in Iran; a Saudi blogger who was imprisoned and flogged for encouraging religious debate; and the Panchen Lama of Tibetan Buddhism, who disappeared in China in 1995.

According to election exit polls, more than 80 per cent of white Evangelicals voted for Mr. Trump. USCIRF’s Reese urged them to use their clout to lobby about international religious freedom.

“I would encourage all those religious people, especially Evangelicals who voted for Mr. Trump, to tell him that this is their issue. This is something that is important to them, and they don’t want him to forget about it now that he’s president,” Reese said.

Last week, US Vice-President Mike Pence assured the World Summit in Defense of Persecuted Christians, organised by evangelist Franklin Graham, that the Trump administration is committed “to defend[ing] Christians, and those of all faiths, whose freedom of religion is threatened.” The Summit was assured that the next US Ambassador-at-Large for International Religious Freedom would be announced very soon.