A Sudan People’s Liberation Movement rebel soldier in South Kordofan state, where thousands of people fled in 2012 to escape fighting between the rebel group and the government’s armed forces.

Rights groups have urged the United States to refrain from removing Sudan from its list of State Sponsors of Terrorism.

“New circumstances have emerged in Sudan that make US efforts at full normalisation dramatically ill-timed,” said the Washington DC-based Enough Project in a recent report.

The NGO, which focuses on Africa’s conflict zones, said that while domestically Khartoum maintains “warm relationships” with “groups that advocate violence and have destructive, intolerant, extremist religious ideologies”, internationally it has facilitated further destabilisation of other countries in the Sahel area, the Horn of Africa and the Middle East through movement of arms and sales of military services. 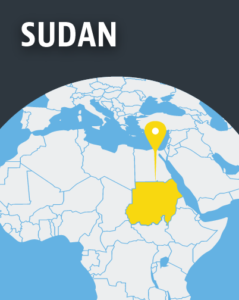 The report, published in February, also criticised the Sudanese government’s treatment of Christians. As World Watch Monitor has reported, church leaders have been detained, church buildings demolished, and other church property sold to investors.

According to Steven Harris, Policy Director of the Ethics & Religious Liberty Commission of the Southern Baptist Convention, if there has been any progress, it “occurred within a broader trend of human rights violations, toleration of extremists, and religious intolerance – an intolerance that was on full display even as the United States was reviewing the country’s behaviour in view of sanctions reconsideration”.

Sudan has been on the US’s list of State Sponsors of Terrorism since August 1993, and has as a result faced sanctions including restrictions on US foreign assistance, a ban on defence exports and sales, and controls over exports of dual-use items.

In October last year the US said it would lift the economic sanctions “in recognition of [Sudan’s] positive actions” in fighting terrorism, expanding humanitarian access and reinforcing a cease-fire in conflict areas.

Rights groups and lawmakers protested against this decision, saying there had been little progress on human rights including religious freedom.

Aid workers have also raised concerns about taking Sudan off the list, according to the IRIN news agency, saying they doubt that the changes they have seen in Khartoum’s bureaucracy are a sign of a permanent change of direction within the government and are afraid that a further lifting of sanctions will stop any new cooperation, “especially if it is soon removed from the [list], opening the way to debt relief and foreign investment”.

“The way we all see it here is that access improvements [of humanitarian aid reaching the population] are a temporary measure to appease Western governments – there’s not been a core change in the government’s behaviour,” an aid worker based in South Kordofan’s Nuba Mountains told IRIN. “Once they get what they want, it’s going to go back to what it was.”

But bilateral talks have continued and last week the Special Advisor in the Office of the US Special Envoy to Sudan and South Sudan, Andrew Burnett, was reported to have “praised Sudan’s cooperation on issues of the second phase particularly those pertaining to religious freedoms, North Korea and positive efforts to achieve stability in South Sudan” during a visit to Khartoum. Britain was also reported to have pledged its support for removing Sudan from the list.

‘Discreet and systematic persecution of Christians’ in Sudan

“We need to put the brakes on the rush to normalise relations with Sudan before there is substantial reform,” said Maddy Crowther, co-executive director at the London-based NGO Waging Peace.

“Individual member states have a responsibility to balance their own internal priorities – for instance Britain’s need to find new post-Brexit partners – against those of Sudan’s people, who deserve to be governed without the use or threat of coercion… Now that the US is dangling the carrot of removing Sudan from the State Sponsors of Terrorism list, humanitarian access and human rights benchmarks should take centre stage,” she told IRIN.

In January the US Secretary of State re-designated Sudan as a ‘Country of Particular Concern’ for “systematic, ongoing, and egregious violations of religious freedom”.

The country ranks number 4 on the 2018 Open Doors World Watch List of the countries where it is most difficult for Christians to live.