The remainders of a car after it was hit by a mortar in an attack by ADF militias on two villages near Beni, eastern DRC, on 11 November.

Two Congolese pastors were among the seven Christians killed in attacks by an Islamist militant group in eastern Democratic Republic of Congo earlier this month.

Six Christians, including Rev. Kausa Kaule Yosua and his daughter, 27-year-old Masika, were killed in the 10 and 11 November attacks by members of the Allied Democratic Forces (ADF) on two villages near Beni, in the northeast of the central-African country. They also kidnapped 13 people, adults and children, a local source told World Watch Monitor. 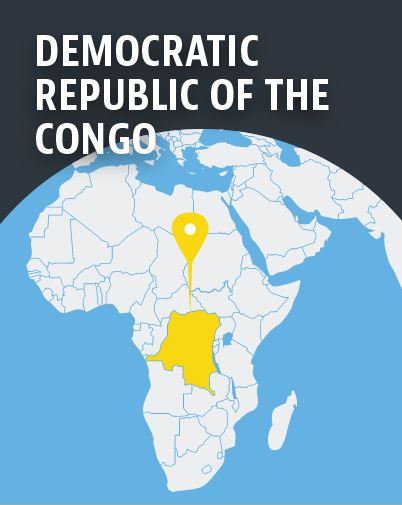 Among those kidnapped was a pastor, Rev. Josias Kapanga Katembo from Boyikene village, whose body was later found in the forest, bringing the death toll to seven.

On the evening of Saturday 10 November, militants entered Mayimoya, 45km from the city of Beni, where they raided the church compound and nearby homes of Christians.

“At about 10pm they [the militants] got into the pastor’s house and attacked his daughter with machetes. When she started screaming for help, her father came out to see what was happening and to rescue her. They shot him dead, and then shot her dead too. One of his grandchildren remains missing,” a church leader in neighbouring Eringeti told World Watch Monitor’s source.

“I was in my house when they attacked,” a survivor said. “From my window I could hear the attackers discussing that the area where they operate belongs to the Muslims, and not to Christians, and that every Christian found in it is an enemy.”

In the attack three children between eight and 13 were also killed. One of them, a boy named Kambale, was related to the pastor. The other two children have not yet been identified as their parents fled Mayimoya during the attack, said World Watch Monitor’s source.

The victims were buried on Sunday, 11 November, at the CECA20 church mission compound in Oicha, 30km north of Beni.

Seven Christians, including four children and three men, are still missing after they were reportedly forced by ADF members to carry away the things they looted from Mayimoya.

Late the following day, 11 November, pastor Josias Kapanga Katembo, 44, of the 8e CEPAC church in Boyikene, 6km northeast of Beni, was kidnapped together with two of his four children and three other Christians belonging to his church, when militants descended on their village, a local source told World Watch Monitor.

Twelve houses and a vehicle were set on fire by the attackers, who entered the village in military uniform.

“The attackers barricaded the road leading to the area of Bell Air and burned down homes situated close to the church … The attackers got in like soldiers on patrol and those who saw them could easily notify inhabitants on the other side of Bell Air. But the church area is situated on the edge of town next to the forest on the east, and it was difficult for them to escape,” the source said.

A family member of a woman who was killed in the attacks carries a cross for the grave as fellow mourners follow with the coffin to the burial site on 12 November.

Pastor Katembo’s wife, Rebecca, 34, was also killed when she tried to flee as militants set fire to her home. The whereabouts of their other four children is still unknown.

A church leader in Beni told World Watch Monitor’s source the attackers in Boyikene did not burn the homes of Muslims: “Before the pastor’s house the house of a Muslim is situated – it is between two houses inhabited by Christians. The attackers skipped that house but torched down the two others which belonged to Christians.”

The violence has caused civilians to flee the area. “The people have fled in great numbers to places like Orientale and Ituri provinces, to Butembo, and some have even crossed the border to Uganda. Please pray for God to help us,” said a spokesperson for a local Christian NGO caring for displaced people in Oicha.

In September, ADF, in a surprise attack, managed to reach the centre of Beni, as reported by World Watch Monitor.

The Congolese army, backed by UN forces, fought the ADF group and in an offensive near the city on 14 and 15 November seven UN-peacekeepers and 12 Congolese soldiers were killed.

The World Health Organization also had to suspend activities in response to a major Ebola outbreak in the area.

‘If Bin Laden’s disciples are seen as terrorists, why should we wonder about the ADF in DRC?’

For the past two decades the Uganda-born rebel movement has taken root and has been blamed for more than 2,500 civilian deaths in three years in eastern DRC.

However, as Nicaise Kibel’Bel Oka, editor of the DRC-based magazine Les Coulisses, or Behind the Scenes, told World Watch Monitor last year, ADF has become known as Muslim Defence International and it has been obtaining the support of jihadist organisations in Africa and beyond.