Nigerian Wanhena Sheku was working alone on her farm when a group she identified as Fulani herdsmen attacked her in mid-October, 2019.

“They told me to place my left arm on a wooden log before they hacked my hand off. Then they took my severed hand and ran away. I managed to make it to my village before collapsing from loss of blood. Fortunately they took me to hospital in Makurdi. But what harm was I doing? And I’m breastfeeding: how can I manage with only one hand now?’

Makurdi is the capital of Benue State and quite near its northern border with Nasarawa State. Wanhena’s village was on that border; the area is known as the ‘bread basket of the nation’.

Mrs Sheku’s attack is just one among 21 pages of incidents of violent attacks which took place across the north and Middle Belt of Nigeria, Africa’s most populous nation, between 1 December, 2019 and 11 April, 2020. This data set, compiled from the Armed Conflict Location and Event Data Project (ACLED), a Washington based non-profit organization, comprises deaths and attacks perpetrated by all groups.

Benue State Governor Samuel Ortom said yesterday that 180,000 people are currently Internally Displaced (IDPs for short) living in 8 camps across his state. Another half a million are living with relatives because they’ve been driven out of their homes, or out of fear of attack.

Meanwhile ACLED data finds, for instance, that in north-east Nigeria, the extreme Islamist militants Boko Haram – whose impact has now spread across the Lake Chad region into several neighbouring countries from its start in 2009 in Maidugiri – has killed more people than Islamic State killed in Iraq and Syria combined.

This number of 27,000 dead at the hands of Boko Haram over the past ten years is in the latest – and most detailed and comprehensive – new report tracking the violence occurring across Nigeria. Figures cover both violence perpetrated by Boko Haram and (less well-known internationally but just as deadly) that carried out by mainly-Muslim Fulani militant herders on mainly-Christian farmers, and at times vice-versa.

Meantime over the past 20 years, nearly 19,000 people have been killed by extremist militant Fulanis, with over 43,000 Nigerians – the vast majority women and children – killed by Boko Haram over the same period. (Boko Haram mainly started using violence from 2009 onwards).

In addition to Boko Haram, “Fulani militias in central Nigeria are also committing crimes against humanity and genocidal massacres against Christians,” Greg Stanton of Genocide Watch says in the report: “What is mistakenly portrayed as a conflict between herders and farmers is actually a genocidal war between ethnic groups that previously co-existed, ignited by Islamic extremists with modern weapons.”

The researchers go to some lengths to explain how they merged, compiled, extrapolated and edited the data, explaining that “We expect a 10-12% error based on numerous duplicates, sources, reiterations of reported incidents, deaths, sources, etc”.

“Overall, Boko Haram/lSWAP [Islamic State in West African Province, which broke away from Boko Haram] and Fulani militants are conducting a genocidal slaughter in Nigeria. While it is straightforward to ascribe blame to Boko Haram/ ISWAP leaders, the latter are being led, either directly or indirectly, by covert individuals, or through veiled public pronouncements. We are not condemning the entire Fulani population, as we know that there are nonviolent Fulani and those who are Christians. We desire to present a balanced report on the acts of Fulani militants as well as those who are killed. Our research with individual Fulani cite a militant faction that takes orders from someone, but there is a source limitation on where these militants live or an incapacity to expose those who are providing directives”.

The major new development offered by this report (one of a number published recently seeking to focus global attention on a crisis only now beginning to receive international attention) is that it seeks to show in maps, data and graphics the deterioration of security countrywide over the past two decades.

The UN’s Special Rapporteur on Extrajudicial, Summary or Arbitrary executions, Agnes Callamard, after her September 2019 visit to Nigeria, describes “a pressure cooker of internal conflicts and generalised violence that must be addressed urgently….

“Weak rule of law and its brewing crisis”, she said, “are intertwined with, result from, and come on top of, a nation-wide population explosion and increased rates of extreme poverty which characterises the reality for roughly half of the Nigerian population. This is exacerbated by the spreading environmental degradation and desertification evident throughout West Africa. It is also fed by the increasing proliferation of small and military-grade weapons made readily available as a result of regional instability and originating, according to some reports, from as far as the Libyan conflicts”.

In January, the UK-based Conflict Armaments Research (CAR) organisation published a report which showed that European shipping companies “have unwittingly transferred large-scale weapons shipments orchestrated by traffickers [criminal gangs] based in both Nigeria and Turkey. Of 148 weapons seized by Nigerian security forces during the escalating conflict between farmers and herders in Nigeria’s Middle Belt, ten were high-powered pump action shotguns brought into Lagos concealed in shipping containers billed variously as carrying steel doors and washbasins”.

Conflict Armament Research’s work also found Iraqi assault rifles similar to ones used by an Al-Qaeda-affiliated jihadist group operating in Mali. Researchers said the weapons all had their serial numbers erased in the same way, indicating that the same illegal supplier was operating in both countries.

CAR’s study further identified, among the 148, three Polish-made AK-47s sold during the Cold War to Colonel Gadaafi in Libya. The report identifies the ‘smoking gun’ long reported by locals in the Middle Belt, but which they have found hard to formally prove to policymakers.

CAR’s Head of Regional Operations in West Africa, Claudio Grammizzi, said the arms flows showed that fighting between herder and local communities in Nigeria is “not simply a local affair…These weapons are coming partly from beyond Nigeria’s borders. Preventing their rapid replacement requires efforts by law enforcement beyond the Sahel, as well as targeted interdiction of new arms being trafficked from Europe and Western Asia”.

As World Watch Monitor reported in February 2017, the international links are what the Kaduna State governor confirmed when faced with a spate of attacks. Governor Nasir El-Rufai said foreign elements, from Niger, Mali, Senegal, and Cameroon among others, were to blame: “The attackers are foreign Fulani herdsmen, who were avenging past attacks on them and their livestock”. El-Rufai also admitted to paying them money to stop the killings.

The ‘Silent Slaughter Nigeria’ report authors say, under US law, this Governor could now be investigated for ‘funding terrorism’.

(The Nigerian Minister for the Interior, Abdulrahman Dambazau, described the violence at the time – spring 2017 – as merely criminal rather than religiously motivated. He said the attackers do not discriminate along religious and ethnic lines).

In October 2018, President Buhari promised – on a visit to southern Kaduna, which has seen endless violence over the past decade or more – the federal government’s resolve to prosecute the perpetrators. However, locals continue to plead for central government to respond.

A local journalist, Reuben Buhari, reported that last week, 11-20 July, 64 people had been killed in southern Kaduna in a string of villages in a way that he saw as ‘systematic’ across a traditionally Christian area:

19 July: 18 killed, 30 injured and/or displaced in attack on wedding reception

Locals say that there is a clear disparity between the number of Christian villages and communities attacked (and sometimes still occupied by the attackers several months, even years after the original incident) and the number of Muslims killed.

ICON and PSJ’s detailed research sets out to show the intensity of the crisis across the Middle Belt and the rest of Nigeria with its data tools.

One of the report’s most striking features is the increases in numbers primarily shown on its maps; especially those over the past 5 yrs (to 31 January 2020).

The other striking thing about this huge detailed report is the way it has tracked the spread and growing intensity of the violence perpetrated by militant Fulani herdsmen. The maps below give visual representation of the endless written accounts of such incidents. 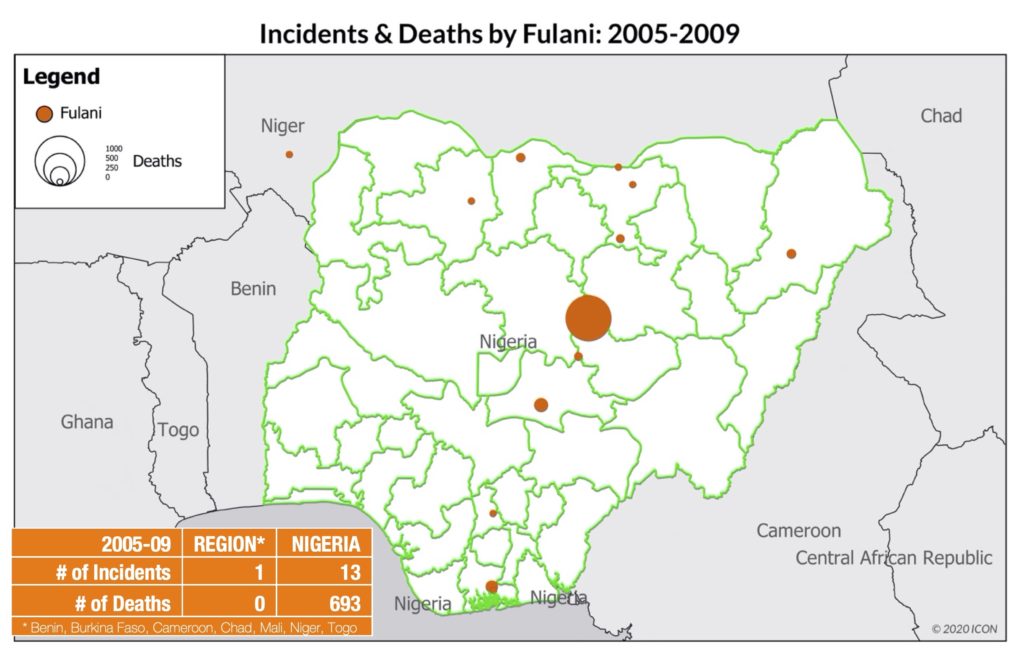 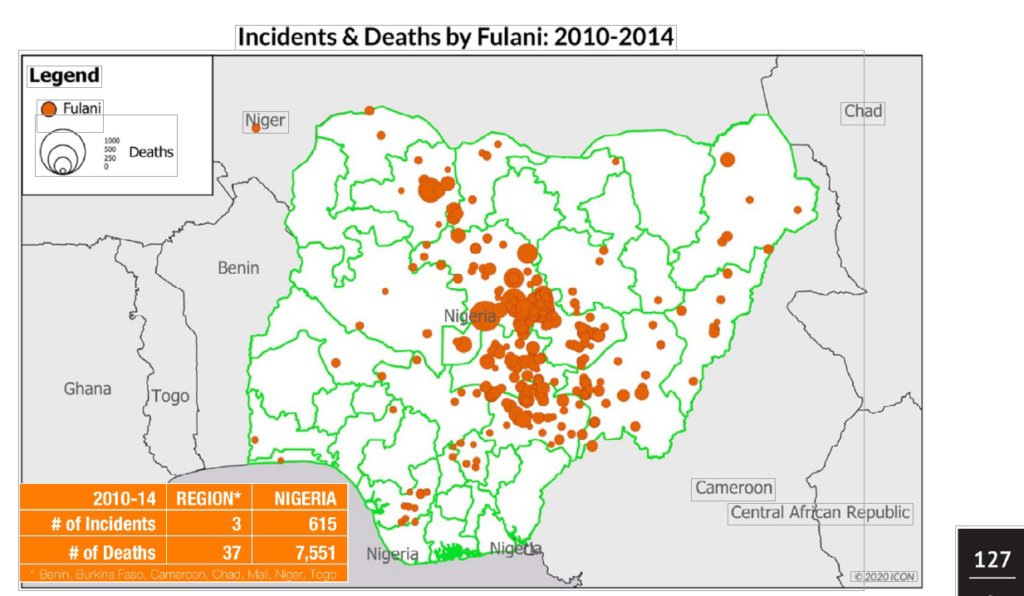 ( from Map data TOTAL of 18,734 people have died at the hands of extremist Fulani militias over the past 20 years).

There are similar maps detailing the number of incidents and deaths attributed to Boko Haram and other extremist Islamist groups such as ISWAP.

The ‘Silent Slaughter Nigeria’ report also draws on and publishes detailed extracts of information compiled by State governments; this is unusual in NGO reports that WWM has seen so far from Nigeria about the herders-farmers issue.

It includes a report from the Governor of Benue State Samuel Ortom’s Emergency Management Agency presented to the UN Country Team, donors and development partners in February 2018. Key facts to emerge from that were that – not surprisingly for the nation’s ‘bread basket’ – 75% of those employed in Benue are farmers. Of those killed by militant Fulani herdsmen between 2011 and 2018, half were farmers.

This crisis led to Governor Ortom signing ‘grazing laws’ in November 2017, but their introduction did not bring an end to violence.

The ‘Nigeria’s Silent Slaughter’ report also includes a report by the Secretary to the State Government of Taraba State from June 2019, which includes a list of all incidents 2015-18; it shows photo compilations from villages (including gruesome pictures of burned bodies) and church denominations, including a number of Anglican dioceses.

“Our leaders who are in power have the responsibility to protect their citizens but they are not protecting Nigeria’s poor,” Anglican Archbishop Ben Kwashi, of Jos Diocese in Plateau State, is quoted in the Foreword. “All the protection is on the rich people and this is inexcusable. The lack of basic security around Nigeria is not a new story, but it is an important one that has been under-reported. Nigerians must have protection and their government must be proactive and held accountable to end the violence and instability”.

The man behind the US’ International Freedom Act, former Congressman Frank Wolf spoke passionately at the report’s launch, appealing for a US Special Envoy to Nigeria to be appointed who could co-ordinate different UN agencies such as the World Food Programme to address the looming crisis across Nigeria’s Middle Belt, as well as deal with the security threat posed by ISWAP and Boko Haram.